On Wednesday, the Treasury Department released its Monthly Treasury Statement for September and the fiscal year 2014. It’s the official account of how the US government arrives at its infamous deficit. And it was a doozie.

Without giving it a second thought, the media gushed about the headline number, how good it looked, how the US government was getting its fiscal mess in order.

Receipts rose $247 billion to $3,021 billion, outlays rose $50 billion to $3,504 billion (including “on-budget” and “off-budget” items) for a deficit of $483 billion. At 2.8% of GDP, as the media gleefully pointed out, it was proportionately the smallest since 2007. The deficit monster has been tamed. And unthinkable as that seemed a couple of years ago, it has disappeared as a political issue, even before the election!

There is just one teeny-weeny problem:

Turns out, the US gross national debt, as I’d reported in early October, ended fiscal 2014 at 17.824 trillion, up $1.086 trillion from fiscal 2013. This is the real increase in real Treasury debt that real taxpayers will have to deal with in the future.

The chart of the gross national debt below is a mesmerizing picture of America’s fiscal condition as it developed over the years, with some peculiarities:

One, the US, had four years of official “surpluses” between 1998 and 2001 that at one point exceeded 2% of GDP. They should have brought down the gross national debt by the amounts of the surpluses. But not these “surpluses!” Instead, the debt increased in every one of those four years, in total by $394 billion. That’s how much real debt it took to cover these government accounting “surpluses.” 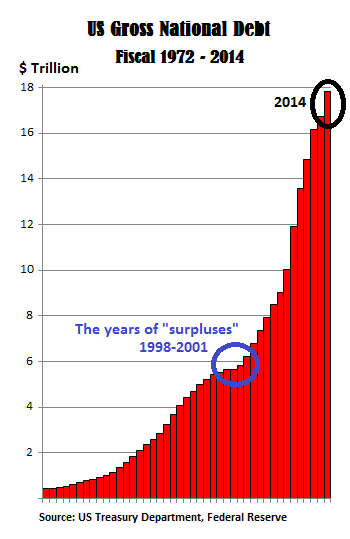 Are they lying to us here in the land of open and transparent governance? Well, they’re not actually lying. They’re using government accounting. It’s like corporate accounting: a purposeful mix of revelation and obfuscation.

Part of the discrepancy is a result of last year’s debt ceiling charade. In March 2013, Treasury debt hit the ceiling set by Congress. To fund the government deficit, the Treasury Department borrowed from other accounts to be repaid later. “Extraordinary measures,” it was called. On October 17 last year, so in fiscal 2014, after Congress and the White house had agreed on a deal to avoid default, the gross national debt jumped by $328 billion in one fell swoop. Since most of it was spent in fiscal 2013, we can subtract it from the $1.086 trillion debt increase in fiscal 2014, which brings it down to $758 billion.

And then what happened?

Government accounting. On page 3 of the Treasury Statement, under the bottom line of “Total On-Budget and Off-Budget Financing” of $483 billion – so the official deficit – there is a section with three more lines, called “Means of Financing.” It explains the mega-difference between the official deficit and the official increase in the debt.

It states right there, in clear text:

“Borrowing from the Public”: $797.6 billion. That’s how much the Treasury admitted it borrowed in fiscal 2014 to cover the deficit of $483 billion; one line beneath the other. Pretty close to my estimate above of $809 billion. So let’s go with the Treasury’s number. And how was that $797.6 billion in newly borrowed money used?

But it’s NOT included in the deficit.

That line doesn’t shows up again. After a brief appearance of how $244 billion was borrowed from the public and loaded onto future taxpayers, it disappeared from the statement into a complex web of government accounting to never be seen again by the public.

That’s one way to solve a nagging problem.

OK, I get it. Government accounting, like corporate accounting, is designed to pull a bag over our heads. We minions don’t need to know these silly details. This is the equivalent of Wall Street: don’t dig through the footnotes, just buy, buy, buy! It works with the mainstream media which abounded in praise for the economy and the government’s adroit fiscal management as the deficit is withering away before our very eyes. At this pace, pretty soon, they’re going to discuss once again how to spend the “surplus.”