By MIN ZENG And LINGLING WEI at The Wall Street Journal 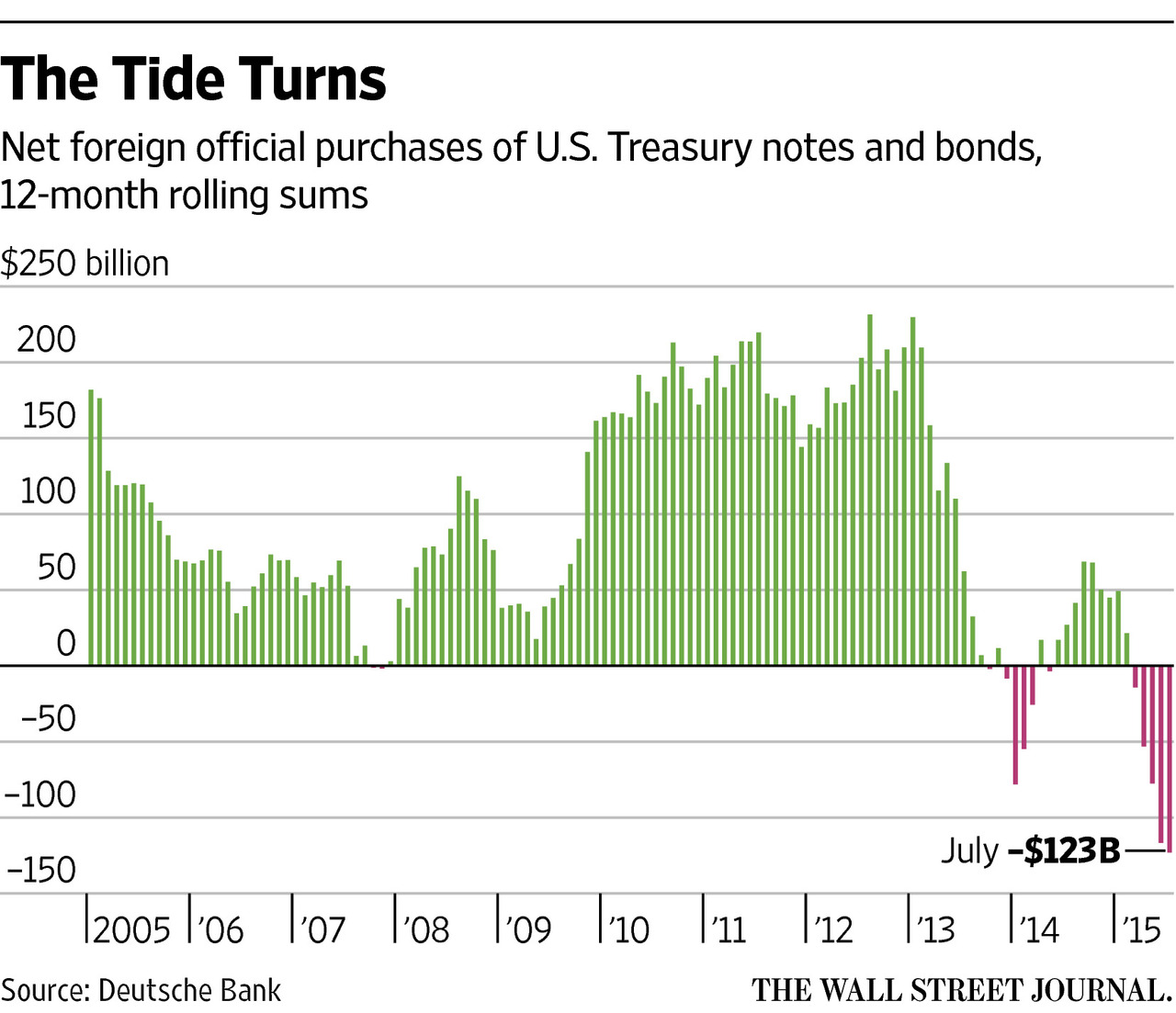 Central banks around the world are selling U.S. government bonds at the fastest pace on record, the most dramatic shift in the $12.8 trillion Treasury market since the financial crisis.

Sales by China, Russia, Brazil and Taiwan are the latest sign of an emerging-markets slowdown that is threatening to spill over into the U.S. economy. Previously, all four were large purchasers of U.S. debt.

Few analysts expect much higher yields in the Treasury market as a result. Foreign private purchases of U.S. debt have increased amid pessimism about the world economic outlook. U.S. firms and financial institutions continue to buy Treasurys, as do some foreign central banks.

Still, many investors say the reversal in central-bank Treasury purchases stands to increase price swings. It could also pave the way for higher yields when the global economy is on firmer footing, they say.
Central-bank purchases over the past decade are widely perceived to have “helped depress the long-term Treasury bond yields,’’ said Stephen Jen, managing partner at SLJ Macro Partners LLP and a former economist at the International Monetary Fund. “Now, we have sort of a reverse situation.”

Foreign official net sales of U.S. Treasury debt maturing in at least a year hit $123 billion in the 12 months ended in July, according to Torsten Slok, chief international economist at Deutsche Bank Securities, the biggest decline since data started in 1978. A year earlier, foreign central banks purchased $27 billion of U.S. notes and bonds.

In the past decade, large trade surpluses or commodity revenues permitted many emerging-market countries to accumulate large foreign-exchange reserves. Many purchased U.S. debt because the Treasury market is the most liquid and the U.S. dollar is the world’s reserve currency.

Foreign official purchases rose as high as $230 billion in the year ended in January 2013, the Deutsche Bank data show.

But as global economic growth weakened, commodity prices slumped and the dollar rose in anticipation of expected Federal Reserve interest-rate increases, capital flowed out of emerging economies, forcing some central banks to raise cash to buy their local currencies.

In recent months, China’s central bank in particular has stepped up its selling of Treasurys.

The People’s Bank of China surprised investors by devaluing the yuan on Aug. 11. The heavy selloff that followed—triggered by concerns that Beijing would permit more weakening of the yuan to help spur growth—caught officials at the central bank somewhat off guard, according to the people.

To contain the selloff, the PBOC has been buying yuan and selling dollars to prevent the yuan from weakening beyond around 6.40 per dollar.

Internal estimates at the PBOC show that it spent between $120 billion and $130 billion in August alone in bolstering the yuan’s value, according to people close to the central bank.

China isn’t alone. Russia’s holdings of all U.S. Treasury debt fell by $32.8 billion in the year ended in July, according to the latest data available from the U.S. Treasury. Taiwan’s holdings dropped by $6.8 billion. Norway, a developed nation hit by the oil-price decline, reduced its Treasury holdings by $18.3 billion.

Traders said China’s selling has been a factor in why 10-year Treasury yields have remained near 2% as stock and commodity markets tumbled in recent months. The yield fell as low as 1.6% before the so-called taper tantrum in mid-2013 as the Fed prepared to end monthly bond purchases.

Some analysts have warned for years that persistent fiscal deficits made the U.S. Treasury market vulnerable to a reduction in foreign purchases. But many investors say they believe longtime holders such as China won’t sell bonds in a way that threatens to disrupt the market.

“I can’t rule out China being a big risk to the bond market but it’s not something that is keeping me awake at night,’’ said James Sarni, senior managing partner at Payden & Rygel in Los Angeles, which manages $95 billion. “While they may decide to sell more Treasury bonds, the transactions are likely to be done in a prudent way.”

Indeed, bond yields have remained persistently low for the past decade and have fallen sharply since the 2008 crisis, thanks in part to strong official and private demand for debt deemed safe.

In the 12 months to July, foreign private investors bought long-term Treasury debt at the fastest pace in more than three years.

U.S. bond mutual funds and exchange-traded funds targeting U.S. government debt have attracted $20.4 billion net cash this year through the end of September, poised for the biggest calendar-year inflow since 2009, according to fund tracker Lipper.

Sales by foreign central banks could accompany a further decline in bond yields, by underscoring the depth of economic problems hitting emerging regions. For over a decade before the recent slowdown, developing nations, led by China, were viewed as the engine for global economic growth.

“We have a problem of insufficient demand globally,’’ said Michael Pettis, professor of finance at Guanghua School of Management at Peking University in Beijing and the author of “The Great Rebalancing: Trade, Conflict, and the Perilous Road Ahead for the World Economy.”

Slack in the U.S. economy argues against a sharp rise in rates, said Prof. Pettis.

“U.S. bond yields are not going to rise significantly unless we have much stronger growth and higher inflation,” he said.