Thanks to the sequester (long forgotten by most), alleged “cuts” in spending were scheduled to happen automatically.

But no one is Washington is happy with that prospect: Not McCain, not Obama, not defense hawks, not Republicans, not Democrats, not anyone that I can find.

The following headlines will tell you everything you need to know.

On September 10, the Daily Beast reported Obama Wants a Blank Check to Fight ISIS—and Congress Is Ready to Give It to Him.

On August 14, Reason.Com wrote Effects of Sequester Cuts Were Overstated, but GOP Hawks (and Obama) Want to Cancel It Anyway

“House Budget Committee Chairman Paul Ryan laid out a budget vision Tuesday that goes beyond President Obama’s request by ramping up defense spending beyond the caps in 2016 and restoring them by 2017.”

Cuts? What Cuts? Where? When?

Before you can undo cuts, don’t you first have to have cuts? Logically, one should think so. So let’s investigate the cuts.

Impact of Sequester on Defense Budget 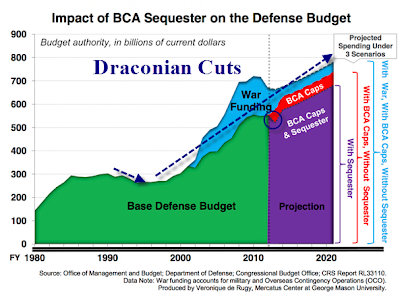 The Mercatus Center put the “cuts” in perspective on August 21, 2012 (see above chart) in its report Defense Spending Will Continue To Grow In Spite of Automatic Cuts Set By BCA.

As a result of Congress’s failure to come up with a $1.2 trillion deficit-reduction plan, automatic spending cuts or “sequestration” set by the Budget Control Act of 2011 (BCA) is set to take place from 2013 to 2021. As the threat of sequestration looms, concerns about cutbacks in defense spending have become a significant issue surrounding debates tied to national security and American jobs.

The expansion of the defense budget starts with the Department of Defense’s base budget (green region), which is the legal amount of spending approved by Congress. The base budget does not include war costs – categorized as Overseas Contingency Operations (OCO) – for military operations in Afghanistan, Iraq, and other defense operations. Therefore, the additional costs for funding wars (blue region) are included in the chart to establish a full picture of defense spending.

As the chart shows, defense spending has almost doubled in the past decade in current dollar terms and will continue to grow in spite of automatic cuts set by the BCA. Clarifying these figures reveals that sequester cuts do not warrant the fears of policymakers who warn about “savage cuts” to the defense budget.

As I have pointed out before, the way compromise in Congress works is both sides get money for whatever ridiculous programs they want.

Recall that the sequester (automatic cuts) was supposed to force bipartisan compromise on tackling the deficit. It didn’t. Both sides opted for the sequester instead.

The sequester called for a reduction in future budget increases (no actual cuts anywhere except a trivial amount in the first year). Now both parties complain about “draconian cuts” that never happened.

Reductions in the rate of future budget increases will now be restored.

What a bunch of hypocrites. It’s sickening.