A little over a week ago in “Full Metal Retard: US Launches ‘Performance-Based’ Ammo Paradrop Program For Make-Believe ‘Syrian Arabs’” we outlined what is perhaps the most hilarious Pentagon scheme designed to arm rebels in Syria to date (and that’s saying something).

Following the comical demise of the latest “train and equip” program, the US is out of options for supporting the opposition in Syria and so Washington decided to go back to Old Faithful: the Kurds.

But that presents a problem.

The US is now flying sorties from Incirlik and Turkish autocrat President Recep Tayyip Erdogan hates the Kurds and has gone out of his way to make it clear that Ankara doesn’t distinguish between the PKK and the YPG. For the uninitiated, here’s the problem broken down in bullet points:

Now clearly, this is beyond absurd. That is, Turkey only got NATOs support for the politically motivated crackdown on the PKK because Ankara agreed to bundle said crackdown with a military campaign against  ISIS. But the Syrian Kurds are the most effective ground force of them all when it comes to combating Islamic State.  Because those Syrian Kurds are aligned with the PKK, Turkey is effectively trying to say its army is fighting ISIS, the PKK, and YPG all at once even as both the PKK and the YPG are also fighting ISIS.

And so, in an unbelievably silly attempt to keep from angering Erdogan, the US effectively created a fictional group of “Syrain Arabs” and then claimed that YPG had formed an alliance with the made-up army. Next, Washington dropped 50 tons of ammo into the desert (literally) and claimed that the “Syrian Arab Coalition” had retrieved it. Of course it was the Kurds who actually picked it up, the Pentagon just needed a cover story to feed to Ankara in case Erdogan lost his mind. Which he did.

As noted above, all of this comes in the context of what is supposed to be a cooperative effort between the US and Turkey to fight ISIS.

When the deal was struck a few months back (following a suspect suicide bombing in Suruc that served as the pretense for Erdogan’s “war on terror”), the two countries agreed to establish an “ISIS-free zone” near Aleppo. Here’s the map: 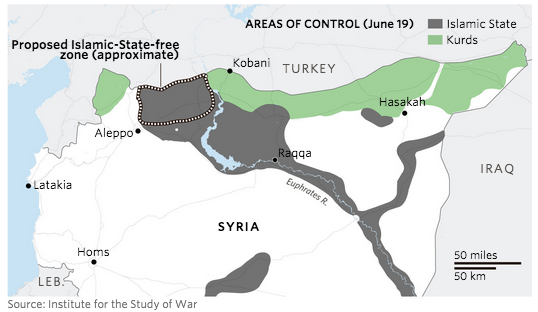 Note that when the US-Turkey alliance was formally established, the Kurds were set to squeeze ISIS from the east and west, meaning that if Washington and Ankara had just left the YPG to their business, the “ISIS-free zone” would have probably been rid of Islamic State in a matter of months. But alas, Turkey convinced the US to tell the YPG to halt their advance and the ensuing awkwardness put Washington in a tough spot, as the US had previously backed the Kurds with airstrikes.

Well now, just days ahead of elections in Turkey which Erdogan is banking on to restore AKP’s absolute majority at the expense of popular support for the pro-Kurdish HDP, the Turkish army has now attacked the very same Kurdish fighters that the US just supplied with 50 tons of ammo two weeks ago. Here’s The New York Times:

Turkey has confirmed that it struck positions in Syria held by Kurdish militias that over the last year have become the most important allies within Syria of the American-led coalition fighting the Islamic State.

The confirmation of the strikes, which the Kurds said took place over the weekend, adds a new level of complexity to the United States’ struggle to put together a coherent strategy to fight the Islamic State in Syria. It also increases tensions between the United States and Turkey, which are nominally allies in the battle against the militant group, but whose interests diverge substantially.

In an interview on a Turkish news channel Monday night, Prime Minister Ahmet Davutoglu of Turkey did not specify when the strikes had taken place, but he said they came after Ankara warned Kurdish fighters not to move west of the Euphrates River.

The Turkish strikes were in Tal Abyad, a largely Arab border town that the Kurds captured from the Islamic State over the summer. The strikes appear to have been limited — they were said to involve machine-gun fire from across the border and did not seem to cause much damage — but they could suggest a new determination by Turkey to expand military operations against the American-allied group.

Prime Minister Ahmet Davutoglu told Turkish television that Ankara had warned the Syrian Kurds known as the PYD that they should not cross west of the Euphrates River — and after the group did so, Turkish jets struck twice at PYD targets.

“U.S. officials have supported the Kurdish efforts to battle ISIS in northern Syria, though it has tried to be sensitive to Turkish concerns about the group, which has ties to Kurdish militants in Turkey who are considered terrorists by both Ankara and Washington.

“Turkey is worried that Syrian Kurds will expand and consolidate their area of control near Turkey’s border while fighting ISIS.”

So just to drive the point home, US ally Turkey is now firing on a group that the US just handed 50 tons of ammo and weapons to earlier this month and that same group has traditionally proven to be exceptionally effective at fighting ISIS.

Needless to say, this is incoherent to the point of absolute absurdity. Washington is spending millions if not billions in taxpayer dollars to both i) fly sorties from a Turkish airbase ostensibly with the aim of hitting Islamic State, and ii) supply Syrian Kurds with hundreds of tons of weapons and ammo even as “ally” Turkey shoots at those same Kurds.

This has become so convoluted and self-defeating that one wonders how long it will be before someone in Congress decides it’s time to take a look at exactly what’s going on here and why it seems like this entire debacle is simply too bad to be true.