What Comes After The Commodities Bust?

The days of E&P companies using external debt financing to fuel growth have most likely come to a close.

The one thing executives should have learned in 2015 is that Wall Street can for long periods of time remain disconnected from fundamentals and can swing to extremes. Another lesson from 2015 is that OPEC can no longer be relied upon to set prices.

Thus, the debt fueled financing boom in the shale space will most likely never return.

As a result, the industry will likely move to self-funding capital expenditures through free cash flow generation in an attempt to significantly reduce its reliance on leverage. Debt levels will initially have to be reduced, significantly fueling a cycle of dramatically lower capital expenditures and consolidation. This process is already underway, but still has a long way to go.

When the internet bubble burst in 2001, only the business models that generated cash vs subscriber growth and cash burn survived and continued to get funded. Furthermore, larger companies survived and thrived as the smaller ones got starved for cash, died or dramatically scaled back subscriber acquisition to achieve a positive cash flow. We are about to experience the same consequences of misguided investments from a Federal Reserve-inspired bubble.

The toxic combination of lower capital expenditures and constrained output will result in another spike in prices, one that few will anticipate.The current Federal Reserve policy, which isn’t conducive to higher commodity prices, will also make the price spike more difficult to see ahead of time. However, in the interim, until policy changes at the Fed or OPEC are enacted, prices will remain below the marginal cost to maintain production.

This is especially true now that there are clear signs that the U.S. economy is weakening while the Fed chose to raise the federal interest rates in December. As we move through 2016, I expect a rash of bankruptcies tied to this transition to lower leverage, and towards the latter half of 2016 there will likely be a steep fall off of production.

E&P companies that have a current leverage of over 4X Debt/EBITDAX and whose interest burden in some cases is over 30 percent of cash flow will eventually fail. I fully expect the new paradigm to be leverage ratios that are well under 4X Debt/EBITDAX.

Take a look at Pioneer Natural Resources (PXD) as a base case. Even with over 80 percent oil hedged through 2016, a leading cost structure and Debt/EBITDAX leverage of just over 1X, Pioneer will still not be FCF positive in 2016 and beyond according to most sell side models.

True the marginal call on cash is $500 million (25 percent of EBITDA) or more depending on the assumption of realized prices through asset sales. Furthermore it does assume double digit production growth, which will require more capital to achieve and higher cash burn but also comes with a hedge price of over $60 per barrel.

Looking at a smaller producer WPX Energy (WPX) on a flat production outlook and minimal hedges in 2016-17 with assumed WTI prices remaining under $50, they too will be free cash flow negative as leverage will remain over 3X Debt/EBITDAX approaching 4X by 2016 end. Their cash call will range from 15 percent of EBITDA to 35 percent in 2016 and 2017, according to JPM.

The point of this is that the current strip – even with hedges – doesn’t support free cash flow. That indicates that if the industry moves to free cash flow generation as a requirement and lower leverage, something has to give.

Business models are still adapting to the new paradigm. And many producers will go insolvent as debt markets close for them. Production will rationalize as depletion hits output and capital expenditures are cut further. Looking at PXD and WPX, it does not appear that this process of rationalization is over, which is especially true if prices remain under $50 per barrel. Nor has the negative feedback loop on lower capex, which spells trouble for new production to replace declining output later this year and next.

The de-leveraging that is occurring in E&P is a broader theme playing out in the global economy. Take China, for example, where growth was built on plentiful credit. But growth has slowed and credit is no longer as generous, both of which are leading to the need to correct debt levels – further fueling slower growth. I believe the Fed has realized that QE was increasingly having weaker positive outcomes. As a result it alternatively turned to a policy of a strong dollar knowing the impact on commodities. The EU QE only supports that dollar policy further in my view.

Eventually – maybe as soon as 2016 – the world will realize how wrong loose monetary policy has been and will turn back to more traditional means of growth through lower taxation and regulation. When that occurs it will come with altered Fed policy and corrections in equity and the dollar at a time when the commodity sector will not have the means to fuel supply growth.

Thus while the current downturn is not only unsustainable but is sowing the seeds for another commodity boom in prices, it will support supply growth through lower leverage and capital expenditures being primarily paid for by EBITDA or cash flow. This will require much higher commodity prices at some point. 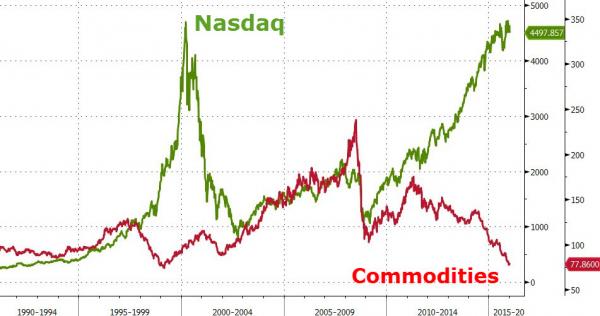 Until then the unsustainable inverse relationship between NASDAQ and commodities will continue. The Fed’s policy has inflated assets while crushing commodities. That cannot continue indefinitely.

Source: What Comes After the Commodities Bust? – ZeroHedge