What Fiscal Stimulus? Next President Will Inherit Trillions Of Built-In Deficits 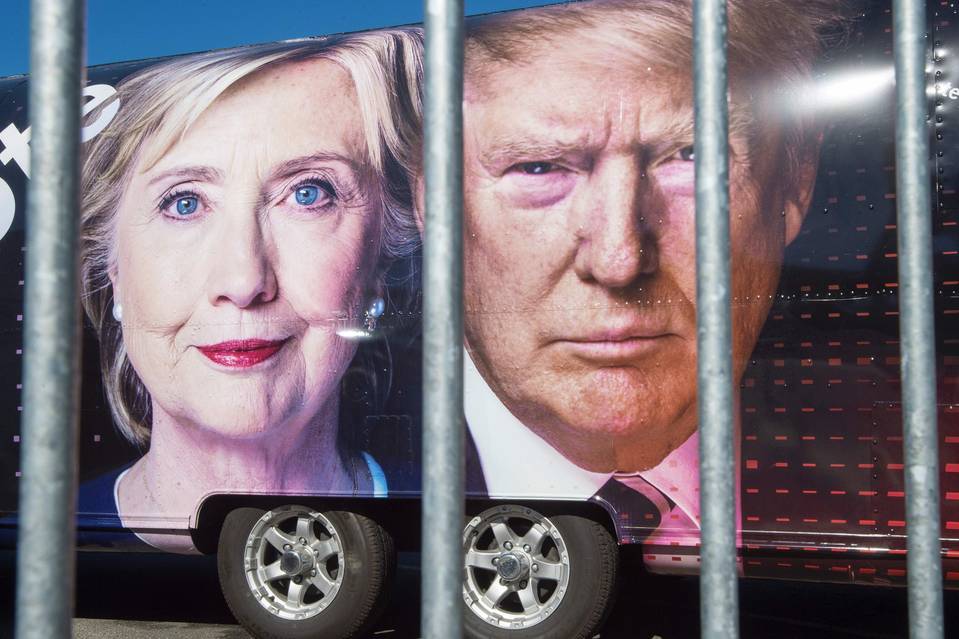 Donald Trump and Hillary Clinton are likely to recite their varied promises for fresh government spending at Monday’s first presidential debate. One reality they’re unlikely to note: Whoever wins in November will enjoy far less latitude to spend money or cut taxes than any president since World War II.

Not since Harry Truman will a new leader enter office with a higher debt-to-GDP ratio. And for the first time in decades, the new president will face the specter of widening deficits despite a growing economy.

“The next president, no doubt, is going to be very constrained,” said Rep. Charlie Dent, a Pennsylvania Republican who sits on the House appropriations committee and hasn’t endorsed anyone for president.

A President Trump or Clinton could try to barrel ahead anyway, of course. But Mrs. Clinton, in particular, is likely to be checked by the opposing party’s control of at least one chamber of Congress. And that doesn’t take into account what would happen if the U.S. enters another recession, when falling revenue would send deficits even higher. In that scenario, the Federal Reserve and other central banks would have less room to respond if interest rates remain near today’s ultralow levels.

Due to this erosion in the “policy arsenal” available to monetary policy makers, “the burden for any classic Keynesian response would have to fall more on the fiscal side, which is why the political constraints on action are more scary,” said Timothy Geithner,President Barack Obama’s first Treasury secretary.

Those fiscal constraints, though, are increasingly palpable. Spending on discretionary programs, or those that lawmakers fund directly every year, is being crowded out by spending on what are known as entitlement programs, including Medicare and Social Security. About two-thirds of all spending—including interest payments on the national debt—is in that latter category, compared with about half in the 1980s. Just one-third of spending is actually set by Congress and the White House through annual spending bills. 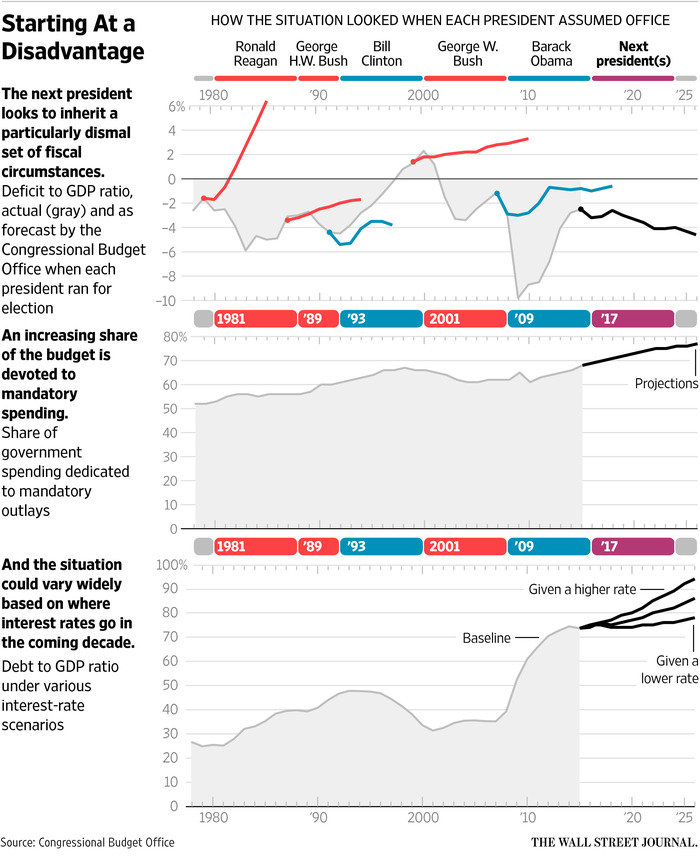 By 2022, nearly every dollar of revenue the U.S. collects will have been committed before Congress even takes a vote, according to an analysis by Eugene Steuerle of the Urban Institute.

With more and more federal spending on autopilot, there is “almost no discretion or flexibility to act to address new challenges without having to renege on past promises to the public,” says Mr. Steuerle, a Treasury official in the Reagan administration.

Failing to tackle these issues will make the next president “a lame duck for most of his or her term because they’ll have no room to do anything else,” he said.

Previous Republican presidents have gotten leeway from GOP lawmakers willing to tolerate deficits in favor of tax cuts. Mr. Trump has advocated a tax-cut package that could reduce revenue by 10% over a decade while endorsing big spending boosts for infrastructure, veterans’ health care and national defense. He has also promised to spare Social Security and Medicare, the biggest drivers of spending over the coming decades, from any changes.

Mr. Trump’s advisers say stimulating growth is a bigger imperative than balancing the budget. “Like Ronald Reagan, the deficit maybe isn’t Mr. Trump’s highest priority,” said Lawrence Kudlow, an economist who served as a budget official in the Reagan administration and has been advising Mr. Trump.

On the Democratic side, Mrs. Clinton’s proposals implicitly acknowledge the budget headwinds by including offsetting revenue increases for most new spending. Those offsets avoid running up deficits, but they face extra hurdles to being politically palatable.

She has promised a five-year, $275 billion infrastructure program in her first 100 days, a package roughly equal to a highway-funding reauthorization Congress approved last year. She also has proposed to dramatically cut families’ child-care costs and college costs by increasing spending and offering tax breaks.

The 2000 election turned on how to spend a large budget surplus, and President George W. Bush quickly put in place sweeping tax cuts after taking office. In 2008, Mr. Obama proposed to pay for a range of new programs, beginning with the health-care overhaul, by repealing those tax cuts and ending foreign wars. Both presidents faced recessions in their first year, sending deficits higher still.

The 45th president could have one beneficial tailwind: markets suggest interest rates could remain lower for much longer than most imagined just a few years ago, a consequence of slowing global growth. As a result, the cost to service the national debt has fallen to its lowest level in nearly 50 years as a percentage of the nation’s gross domestic product even though total debt as a share of GDP has doubled to about 75% since before the 2007-09 recession. Some say the next president should see that as an opportunity.

“We have a window here, courtesy of central banks of the world, to borrow money very cheaply,” said Jim Millstein, a former Treasury official in the Obama administration who is working on an infrastructure-bank proposal. With low rates deterring private firms from investment, he said, “we’re going to have to use public capital.”

Doug Elmendorf, who as head of the Congressional Budget Office from 2009 until 2015 warned frequently of the toll unchecked deficits could take on the economy, now says the next president should tolerate wider short-term deficits to boost public investment in high-quality infrastructure or education programs.

“My thinking has changed because interest rates have fallen so far,” he said. Policy makers should now recognize the declines have created “a sea change” in the conditions they now face, he said.

These stimulus advocates say not all spending should be treated equally. They don’t support more money on increased benefit spending, for example, that adds permanently to federal outlays.

Others say the case for stimulus isn’t compelling anyway. “If short-term stimulus spending programs were the formula to economic growth, we’d all be studying the Japanese economic miracle of the last 20 years that never happened,” said Andy Laperriere, political strategist at Cornerstone Macro who served as adviser to former House Majority Leader Dick Armey (R., Texas) in the 1990s.