By Costas Paris at the Wall Street Journal

At a logistics park bordering Shanghai’s port last month, the only goods stored in a three-story warehouse were high-end jeans, T-shirts and jackets imported from the U.K. and Hong Kong, most of which had sat there for nearly two years.

Business at the 108,000-square-foot floor warehouse dwindled at the end of 2015 after several Chinese wine importers pulled out, said Yang Ying, the warehouse keeper, leaving lots of empty space. The final blow came after a merchant turned away a shipment in December at the dock.

“The client told the ship hands, just take the wine back to France,” Ms. Yang said. “Nobody wants it.”

Pain is increasing among the world’s biggest ports—from Shanghai to Hamburg—amid weaker growth in global trade and a calamitous end to a global commodities boom. Overall trade rose just 2.8% in 2015, according to the World Trade Organization, the fourth consecutive year below 3% growth and historically weak compared with global economic expansion.

The ancient business of ship-borne trade has been whipsawed, first by a boom that demanded more and bigger vessels, and more recently by an abrupt slowing. That turnabout has roiled the container-shipping industry, which transports more than 95% of the world’s goods, from clothes and shoes to car parts, electronic and handbags. It has set off a frenzy of consolidation and costs cutting across the world’s fleets.

Ashore, it is also slamming ports and port operators, the linchpin to global commerce. Nowhere is the carnage more painful than along the Europe-Asia trade route, measuring roughly 28,000 miles round trip. A cooling Chinese economy and a high-profile crackdown by Beijing on corruption has damped demand for everything from commodities like iron ore to designer scarves and shoes. Meanwhile, Europe’s still sputtering recovery from the global economic crisis is hitting the flow of goods in the other direction.

On Friday, the Hong Kong Marine Department reported throughput for its port in the first quarter was off 11% from the first three months of last year. Throughput for all of 2015 also dropped 11%.

“It is the first time you see people in shipping being really scared,” said Basil Karatzas, of New York-based Karatzas Marine Advisors and Co.

Jonathan Roach, a container-shipping analyst at London-based Braemar-ACM Shipbroking, said some 100 Asia-to-Europe sailings were canceled last year, or 10% of regularly scheduled voyages on the route. 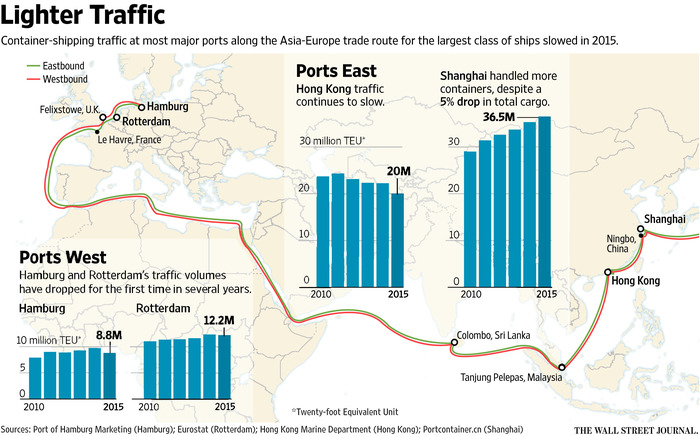 There are many reasons for the global slowdown, including a yearslong commodities-price rout, generally slower growth in Asia and an anemic recovery in much of Europe. Economic and political crises have roiled big markets, including Russia, Ukraine and Brazil. And policy makers blame a dearth of big trade deals, like Nafta, which have spurred big global trade gains in the past.

Not everyone is suffering. U.S. ports from Los Angeles to New York are pursuing expansions in anticipation of higher volumes, thanks to a relatively robust American economy. But even in those ports, retailers are sitting on large amounts of unsold goods, and could cut back on ordering more from overseas if inventories don’t come down.

At the biggest ports in Asia and Europe, there are few signs of a near-term rebound. Last year, Shanghai International Port (Group) Co., China’s top port, handled more containers, but total cargo fell to 513 million tons, down 5% from 2014. Through March this year, volumes were down 4% from the year-earlier period.

Willy Lin, chairman of the Hong Kong Shippers’ Council, said car parts imported from Europe and assembled in China fell by at least 13% by volume in 2015. Shipments of luxury goods, including high-end clothes, shoes and apparel, from Europe were down around 15% last year.

The pain is just as bad in Europe. A recent study by the European Shippers’ Council, which represents around 25,000 exporters and importers, found a 12% decrease in Northern European port calls by all shipping lines between the second half of 2014 and the second half of last year. The study showed a doubling of skipped port calls between Europe and Asia over the same period.

At the Belgian port of Zeebrugge, a major European transshipment hub for container ships and dry-bulk vessels, cargo volumes have dropped to less than half over the past 15 months.

“You can see it at the docks, which at times are empty,” said Fernanda Van Opstal, a sales manager in Zeebrugge for port operator APM Terminals, owned by Danish shipping giant A.P. Moeller-Maersk A/S.

Ms. Van Opstal said exports to China, including timber, fertilizers, metal and plastic scrap, and heavy machinery, continue, but volumes over the past year are down by up to 30% in most categories. So-called “Triple E” vessels, the world’s largest container-carrying ships, are coming and going less frequently, and often less than full.

In Hamburg, Europe’s third-busiest port behind Rotterdam and Antwerp, container traffic with China fell last year to its lowest since 2009. Klaus-Dieter Peters, chief executive of Hamburger Hafen und Logistik AG, which runs three out of the four container terminals in Hamburg, blames China’s slowing economy and the crises in Russia and Ukraine. 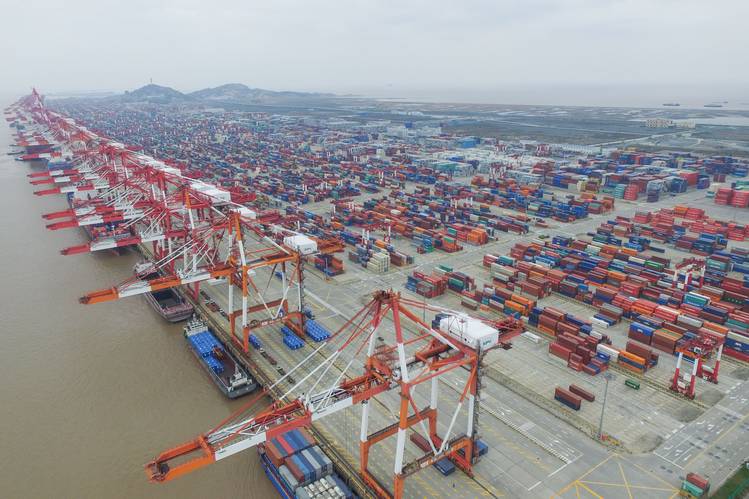 At the Zhanghuabang Terminal in Shanghai, near the mouth of the Yangtze River, roads are lined with idle trucks, with chain-smoking drivers waiting for loads. Inside the terminal on a recent afternoon, 45-year-old driver Sun Shihong was helping other workers unload half-ton, U-shaped coil units made by Shanghai Electric Group for use at power plants

In 2010, Mr. Sun said the company was using more than 40 trucks, each of which made the run between the factory and the port three times a day.