What Inflation Shortfall: rising Rents Outpace Wages In Wide Swaths Of US

By JEFFREY SPARSHOTT at The Wall Street Journal

The cost of renting a home is rising faster than wages across wide swaths of the country, a problem that has become especially acute in the past year, putting a big squeeze on many household budgets.

The situation is particularly noticeable in long-pricey areas across the West and in big cities like New York, where the average household pays more than 40% of its gross income for rent, according to online real-estate database Zillow. But rising prices also have spilled over into cities like Denver, Atlanta and Nashville.

Much of the problem is attributable to simple supply and demand. The job market has improved and millennials are entering the labor pool in force, boosting household formation. But in a structural shift for the real-estate market, new households are much more likely to be renters than buyers.

“Rents have skyrocketed so much and incomes haven’t kept pace, so we have an affordability crisis in some of our major metropolitan areas for the middle housing market,” said Kenneth Rosen, chairman of the Fisher Center for Real Estate and Urban Economics at the University of California, Berkeley.

In the first quarter of 2015, the number of U.S. households was up by almost 1.5 million from a year earlier, the second consecutive quarter of relatively strong growth following years of only tepid gains.

But the net increase was entirely due to renters, while the number of owner-occupied households fell slightly. That’s broadly been the case since the housing bust, with new household formation consistently coming from renters rather than buyers. Thehomeownership rate hit a 48-year low, according to estimates published Tuesday by the Commerce Department, declining to 63.4% in the second quarter from 64.7% in the year-earlier period. 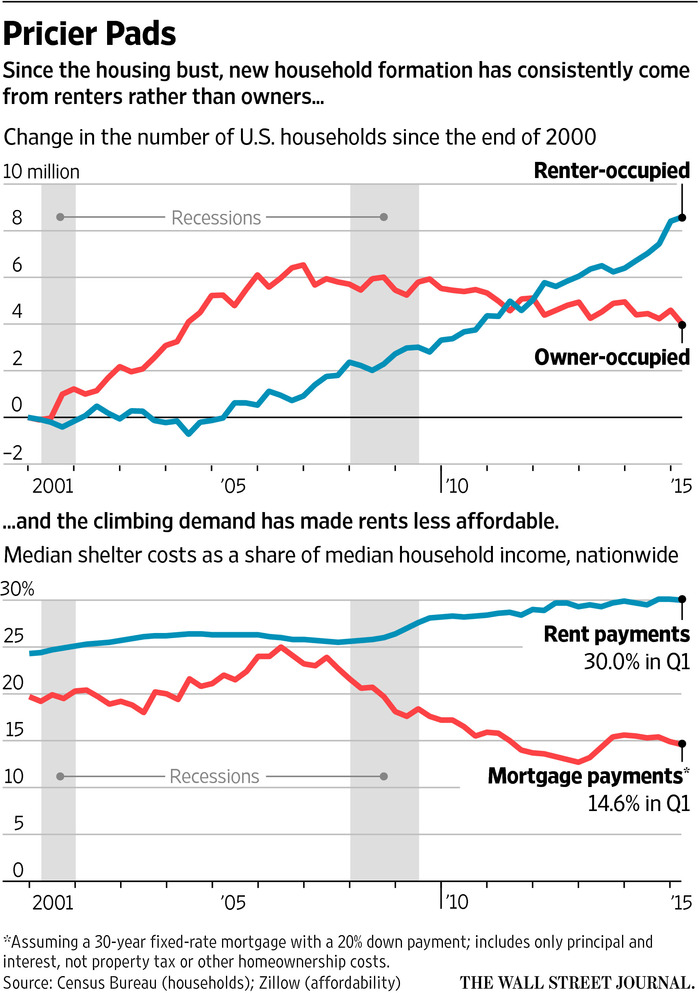 And as rents rise, it’s not only low-income people feeling the squeeze.

Melanie Merrell and her husband, Rahn Burke, pay about 40% of their gross monthly income for rent on their two-bedroom apartment in the Oakland, Calif., area leaving little cushion against financial emergencies.

Economists generally consider a household cost-burdened when it is paying at least 30% of its income for rent.

Ms. Merrell and Mr. Burke, who have two children, turned to Catholic Charities of the East Bay last year for help paying back-rent that accumulated after Mr. Burke lost his job. Now, they are caught up, and he found work as a sales technician at a national media conglomerate while she is looking for a part-time job and studying radiologic science. But their budget remains strained.

“We definitely don’t have a lot of extra, once you get down to food, utilities,” said Ms. Merrell, 38 years old. “Our car’s timing belt just went out, so now we’re trying to get the money together for that.”

Younger Americans also are taking a hit. From 2003 to 2013, the share of renters aged 25 to 34 who are considered cost-burdened increased from 40% to 46%, according to a recent report by Harvard University’s Joint Center for Housing Studies.

Nationwide, U.S. government data shows tame inflation, with the notable exception of rent. The consumer-price index for rent of a primary residence in June was up 3.5% over the past year, while the overall index was up only 0.1%. Meanwhile, average hourly earnings were up 2% during the period.

These forces vary widely by region.

The strongest rent growth is in the West, but prices also are rising in midtier cities across the U.S.

Nashville is one city “getting meaningfully more expensive,” said Greg Willett, vice president for research and analysis at MPF.

Rents there were up 5.1% in the second quarter from a year earlier, well outpacing incomes. According to separate Labor Department data, average weekly wages rose 2.4% in the Nashville metropolitan area between 2013 and 2014.

While builders have been adding new units to the market, most are luxury apartments. In response, the Nashville Metropolitan Council passed a bill July 21 ordering the local planning department to devise a zoning plan that would increase the supply of affordable housing.

“We have a problem,” said Fabian Bedne, a Nashville district council member and a sponsor of the bill. “There is not enough of a pool of housing available, the rents are going up, and it’s making it harder for people.”

Shantay Walker juggles three jobs but still worries about covering rent on her Nashville apartment. “Every time I move, I move to a similar place, but they’re all more expensive,” she said.

The 31-year-old divorced mom of two daughters has looked for other places with cheaper rent but hasn’t found anything that would offer a good home for her daughters, ages nine and six.

So she’s struggling to make ends meet while studying at Nashville State Community College to become a nurse, working as a medical receptionist, moonlighting at a carwash and cleaning the home of a nearby couple.

“The thing that scares me is the food part,” she said. “Sometimes I don’t have money left for food.”