What Manipulation Does To The Free Market

There is a fervent minority that claims gold and precious metals are manipulated to keep their asset prices from reaching a free market determined valuation.  They claim that the measuring stick that is gold (& silver) against which all other assets are held constant, is being distorted.

First things first, what is manipulation and what forms does it take?

Had the federal government held a constant measuring stick rather than “tinkering, engineering, distorting” key government calculations such as the size of the economy (GDP), the rate of inflation, level of unemployment, or size of federal deficits and federal debt…the reality we face would be plain and honest choices needed.  Instead, the responsibility of those working for “the people” has been breached via falsifying and distorting each of these (over decades).  This consistently improves the output and does not allow a true means to quantify and qualify the nations health.  Simply put, the government has continually tinkered, tampered, and distorted the accounting so as to mislead or create a falsely positive appearance.  There is no GAAP* (generally accepted accounting principle) accounting or true measure of the nations liabilities despite all present and future liabilities plain existence on various agencies books.  A quick perusal leads to a number easily in excess of $100 Trillion dollars in liabilities (money that would have to be there in todays dollars in order to pay for present and future liabilities).  Further, money that is not there today would need to be collected via higher taxation rates in the future to fund these underfunded liabilities.  The only other options are cancellation of liabilities (via bankruptcy / outright default) or monetization (digital “printing” of money to pay off the holders of these liabilities). 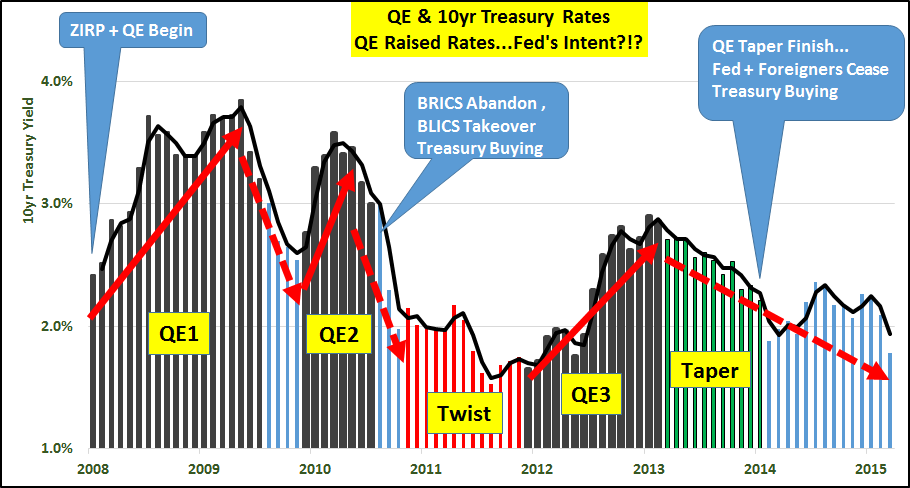 In ’71, Nixon severed the Bretton Woods agreement (and the primary means to maintain balance in US budgets and check the creation of dollars).  Subsequently, Nixon initiated a deal with the devil otherwise known as the Petro Dollar (whereby all OPEC nations would only accept US dollars for their oil regardless the parties involved…and the US military was turned into mercenary’s to protect America’s “middle Eastern allies” and punish those who suggested accepting anything other than dollars)…the US had the means to flood the world with dollars absent the typical hyperinflation that would ensue.  The US ran increasingly large trade deficits but an even greater quantity of dollars were needed by exporting nations to allow dollar denominated trade…particularly those in need of oil imports (Taiwan, Japan, China, S. Korea).  Oil exporting nations gathered up all those dollars from the Asian exporting corporations (who in turn were exchanged massively increasing quantities of local currency…aka, importing inflation) recycled all those dollars into oil and commodity purchases (denominated and executed solely in dollars), stocks, real estate, and obviously US treasury debt.

It is in this environment whereby the US forces nations worldwide to transact in US dollars and dollars alone to purchase energy that America claims China and others to be currency manipulators.

Given all this, shall we accept that the gold and silver markets are not manipulated?  That the inert and generally static metal that is gold which is in its simplest form a fixed measuring stick or focal point against which all else moves…that this alone is not controlled, engineered, distorted, rigged???  As currencies and liabilities (absent means to meet those liabilities except creation of even more currency) are multiplying annually while the total supply of gold advances around 1% annually?

So, manipulation reigns and, although I haven’t even tried to prove it in gold/silver, a reasonable person can make a reasonable assumption what is true for nearly everything else is also true for PM’s.  You nor I may fully understand the machinations which likely lead to todays precious metals rigged prices but below I explain the ongoing and accelerating avalanche of monetization to come.  Absent a fixed focal point, there is no means to know how far the monetary orbit has changed…but why the avalanche?

First, the case study that is Japan…the chart below shows Japan’s declining 15-64yr/old population (consumer base) vs. GDP and BoJ held assets.  A declining base of consumers means fewer home buyers, fewer car buyers, fewer tax payers, etc. and general declines in demand in a highly leveraged economy.  The deleveraging, if it were allowed, would create a price spiral and systemic economic collapse.  Quite simply, the BoJ has determined to remove assets from the “market” to maintain asset prices and avoid the deleveraging.  This is known as monetization or digitally printing money to reduce the outstanding float of assets, pushing up the value of the remaining assets. 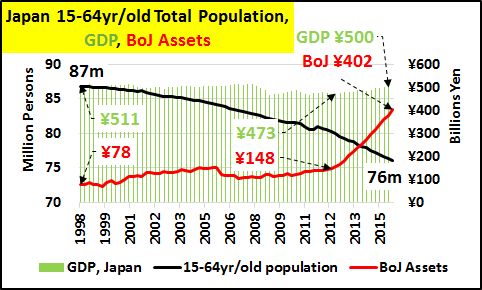 To understand why this policy is lunacy…just look at the Japanese population data provided by the OECD.  The history and likely overly optimistic future estimates for Japan show clearly the BoJ will have an awful lot of “printing” to do for an awful long time! 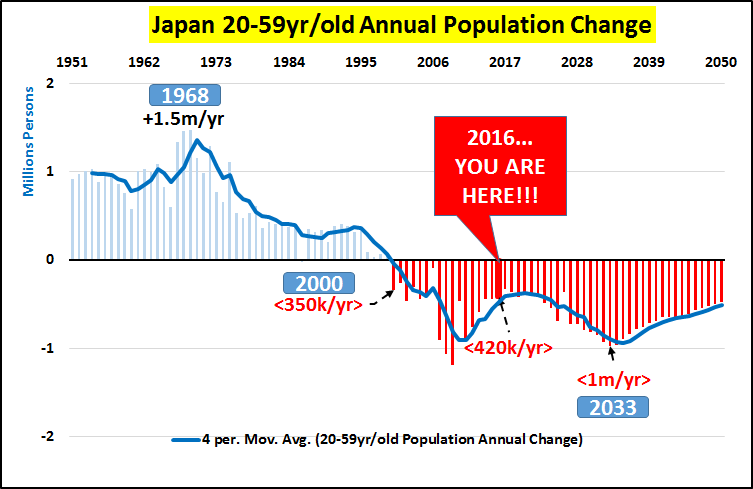 The BoJ has gone down a road that has no end in sight…monetization & balance sheet growth to infinity.

But unfortunately, the demographics facing the BoJ are not unique to Japan and the responses from central banks worldwide are the same.  Balance sheet expansion to remove ever more assets to maintain existing asset valuations.  The chart below shows the combined 34 OECD nations (OECD Members), plus China, Brazil, and Russia annual change in the 15-64yr/old total population.  Together, these nations represent in excess of 3 billion people and likely 80%+ of the worlds wealth and consumption power. 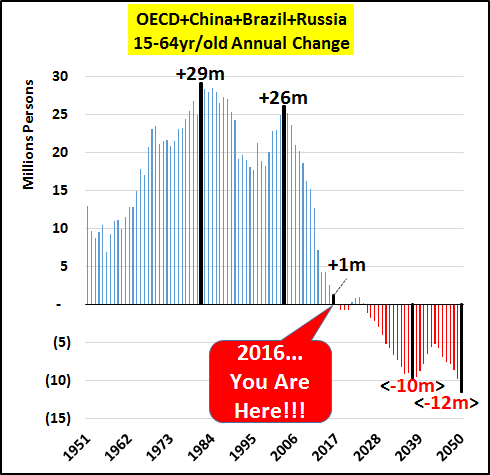 Comparing the growth of buyers (0-64yr/olds) vs. sellers (65+yr/olds).  The collapse of growth and depopulation among the under 65 population vs. the swelling ranks of 65+yr/olds reliant on government programs…to be funded by the shrinking cadre of  young?!? 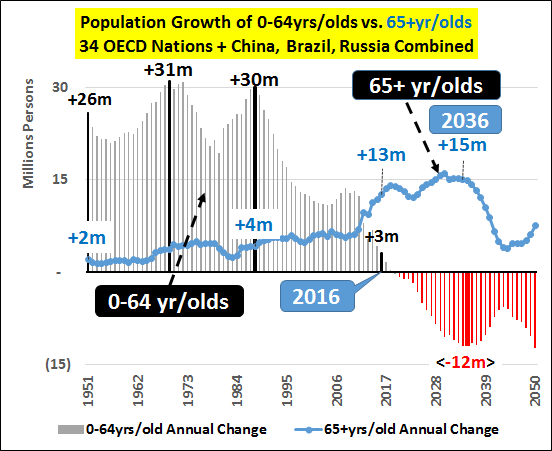 Finally, the global 0-64yr/old annual population change split out with the wealthy and greatest developing nations (OECD, China, Brazil, Russia) vs. the Rest of the World.  The story is the same but what growth remains has shifted from wealthy to poor nations and the population growth is decelerating. 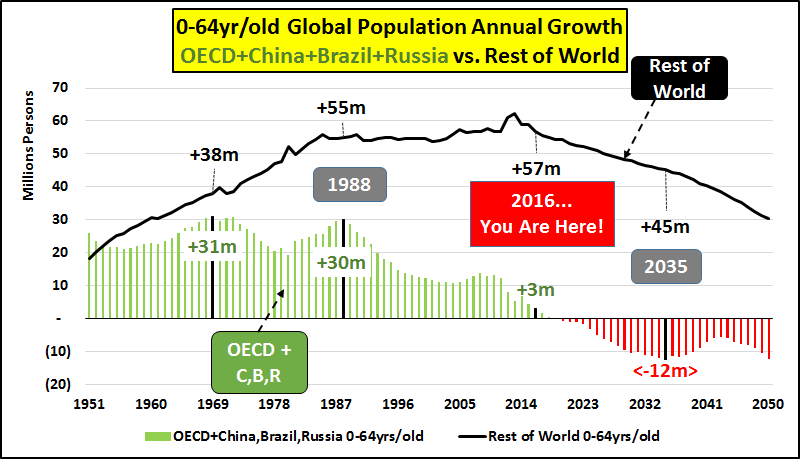 The amount of global monetization (increasing supply of money) necessary to shrink the outstanding stock of assets in order to maintain & further elevate asset valuations will be stunning.  Maybe I’ve got it all right or maybe there are some holes in my thinking.  Maybe the rigging mechanisms are more robust and durable than imagined.  Maybe the attempts to penalize and marginalize precious metals holders are a real threat.  Still, I’m pretty confident that not holding a fixed, inert measuring stick from which to gauge the “accommodation” yet to come seems a really bad idea, regardless precious metals present valuations.

Source: What Manipulation Does to the Free Market – ZeroHedge