What The Hell Is That Ticking Sound In My Head! Household Wealth – The Real Story

Yesterday the media got all bulled up over the Fed’s new data on household wealth showing that it hit a record in the fourth quarter of 2013. As usual with Wall Street’s chattering media class, this wasn’t quite the whole story, at least not the “real” story.  The real story is deeply ominous.

The total net worth of households and non profits did reach a record in nominal terms. That is true. But that’s not the same thing as the wealth of individual households hitting a record in real, inflation adjusted terms. In addition, the calculation of the numbers is based on absurd assumptions which everyone takes for granted as being realistic. And if the net worth of the top 1% was lopped off, the picture would be far bleaker. But we need not even go there. By now it’s been well established that those in the upper income strata have gotten virtually all of the gains in wealth in recent years while the majority falls deeper into the economic mire.

For this analysis I just looked at the data as a whole, and did the simple exercises of dividing the total net worth of households and non-profits of $80.66 trillion by the census bureau’s estimate of the total year end population of the US of 317.44 million. Then I converted that to real terms by dividing the result by the Consumer Price Index. That’s conservative enough. It probably understates inflation by underweighting housing and doesn’t take into account asset inflation at all. But it’s a widely accepted means of converting nominal measures into real, inflation adjusted numbers. The same operation is then performed for every quarter going back in time as far as the data goes. The results are then plotted on this graph. It shows how the wealth of households has trended in real terms per capita. 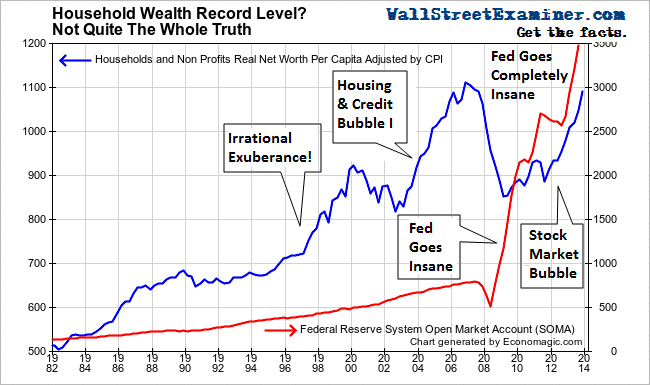 Real Household Net Worth Per Capita – Click to enlarge

I’ve also plotted alongside that line a graph of the Fed’s holdings in its System Open Market Account, which is all of the Fed’s paper holdings that it acquires in trades with Primary Dealers. Prior to 2007, the Fed had steadily grown its holdings at the rate of about 4-5% per year. Household wealth grew at almost double that rate beginning in 1994, prompting Alan Greenspan to proclaim “irrational exuberance” in 1996. Greenspan was particularly concerned that the prices of stocks were growing faster than the Fed’s balance sheet. That was something new. Historically they had grown at more or less the same rate.

The collapse of the internet/tech bubble in 2000-2003 took some of the bloom off the rose as household wealth fell back to the long term trend. Panicked, the Fed sharply lowered interest rates while keeping its asset growth in the 4-5% range. That was sufficient to trigger Housing Bubble I which led to record levels of household wealth per capita in real terms beginning in 2004. That tide peaked in 2006, when the housing bubble crested.

As the Fed scrambled in the early stages of the credit crisis it kept rates low, but withdrew cash from the Primary Dealer system and shrunk its SOMA to fund emergency lending programs in 2007 and most of 2008. The housing bubble crashed and stocks had a big bear market. Household wealth in real terms plunged back to trend. That’s where, like Greenspan before him, Bernanke hit the panic button, opening the floodgates on a massive surge of Fed credit into the financial markets via the Primary Dealers. That initially was followed by a slow recovery in household net worth as the stock market turned sharply and housing prices bottomed in 2009-2011. By late in 2012, both markets were trending sharply higher.

The Fed had a brief return of sanity as it paused QE through most of 2011 and 2012. The housing and stock market recoveries were actually picking up steam during that period. But that was only a temporary remission of the craziness.

Late in 2012 the Fed’s went completely mad. In spite of the fact that both house prices and stocks were in raging bull markets by that point, it opened the money printing floodgates again. This caused extreme distortions in the housing market where prices rose to bubble levels while sales activity remained near record lows. The majority of households were and are in no position to be able to afford buying a house. But prices skyrocketed because there was no supply and absurdly low mortgage rates were subsidizing buyers and inflating prices.  It also caused the bubble conditions we see today to develop in stock prices.

The funny thing is that even though few houses are on the market, and even fewer are sold, the Fed and everybody else thinks that we can simply extrapolate the value of all housing based on this tiny sample of sale prices. The media, Wall Street, and the economic establishment all buy in to this ridiculous charade.

Has anyone bothered to stop and think what would happen to prices if a few more people had to sell their houses in the face of the current near record low buyer demand. These prices are fictitious in that regard. By extrapolating those few sale prices to the entire US housing inventory, the Fed creates the illusion of massive amounts of wealth and capital, backed by massive amounts of mortgage debt. It’s imaginary. It’s pure fiction. This is the essence of the fictitious capital nightmare we face. And nobody is paying attention because of the way we think about this data. It’s irrational and insane, but everybody looks at it the same way, just like they did a decade ago.

Don’t think that another collapse can’t happen, because it can. We’re making all the same mistakes, only worse because we should know better by now.

Despite what the headlines say, there’s no new high in net worth per capita, and by extension per household, in spite of all the insane central bank money creation that we’ve seen over the past 5 years. Net worth per capita was still below the 2006 peak level in real terms in the fourth quarter. No doubt that when the first quarter data is in it will be at a record, most likely by a substantial margin given what has already transpired this year. But the questions we must ask are who benefitted, and is it real?

If most people don’t own stocks, or houses in areas that have seen strong appreciation, and if house prices would fall in the presence of an increase in homes for sale to historic norms,  then this new high in net worth is an illusion. Increasing wealth at the top of the household wealth strata cannot carry an economy to growth indefinitely. “Wealth” based on a tiny sample of inflated sales prices at record low financing costs cannot be actually liquidated. It isn’t real. If the majority do not experience economic gains and therefore provide a strong and broad base of real demand that can sustain active markets with normal levels of inventory, then the growth of asset prices will once again eventually slam back to trend, and probably worse.

We have seen that three prior surges in household net worth driven by cheap and easy central bank credit have crashed back to earth after about 5 years of extreme bubble gains . The current surge is now in its fifth year. What’s that ticking sound I hear?

Keep track of the insanity of the Fed, Primary Dealers, the US Treasury, other central banks and a whole cast of nefarious characters as they drive markets, in the Wall Street Examiner Professional Edition Fed Report and Treasury update. Try the Professional Edition risk free for 30 days!