What Will Fed Do When The Overheated Sectors Carrying US Economy Start Cooling?

While some sectors of the US economy remain buried at or near depression levels and others are just so so, others are red hot. They are at record levels reaching or exceeding the levels hit at the tops of the housing bubble in 2006, and at the top of the internet bubble. For data that shows that, we need look no further than today’s release of initial jobless claims. They hit another record low for the latest reported week of July.

If the hot sectors of the US economy are driving the tepid growth in the overall economic picture, what happens if those hot sectors  are stretched to their natural limits? How long can they continue to run at overheated levels? In the past, overheated sectors, or overheated economies or markets, would persist at those levels for a year or so before succumbing to the forces of correction. Once the correction set in, the unwinding of the excesses would impact many other sectors of the markets and the economy. The popping of the housing bubble and its aftermath are fresh in our memory.  We know how badly things can go.

The difference between now and then is that then interest rates were still at historically normal levels and central bankers had not yet pulled out their magic tools, now colloquially know as Quantitative Easing or QE. It’s essentially money printing at a massive scale. Mainstream economists and journalists, who never saw the bubble in the first place, now claim that QE gets credit for reversing the economic collapse that followed the bubble. Of course we will never know if that’s true, or if the US economy would have rebounded on its own as it had done in every economic panic that preceded the creation of the Fed in 1913. Mainstream pundits seem to forget about that fact, instead preferring to give credit to the great and powerful Oz–Ben Bernanke.

So here we are in 2014 with asset bubbles in stocks and fixed income securities, housing bubbles in most of the developed world as well as many US locales, and evidence of economic overextension in some of the economic data. The problem today is that as the natural forces of correction of the excesses take hold, the Fed’s only tool is QE, since interest rates are already at zero (ZIRP- Zero Interest Rate Policy).

The Fed is currently in the process of reducing QE to near zero. That will be reached by the end of the year. The Fed may be reluctant to re-institute QE very soon thereafter. It would look like panic and would send the message that the US economy is entirely dependent on the drug of eternal money printing. It would also run the risk of triggering commodity booms again as speculators scramble for money substitutes. Sharply rising input prices would be the last thing the US economy could tolerate. Being cognizant of that, the Fed is gradually turning off the monetary spigot.

Today, the headline, seasonally adjusted (not actual) number for initial unemployment claims for the week ended July 19 was 315,000. That was 7,000 more than the consensus guess of Wall Street economists. The actual numbers, which the Wall Street captured media ignores, again show claims below the levels reached at the top of the housing/credit bubble in 2006, a condition which has now persisted for 10 months. Since September 2013 when the number of claims first fell to a record low, the numbers have suggested that the central bank driven financial engineering/credit bubble has reached a dangerous juncture. 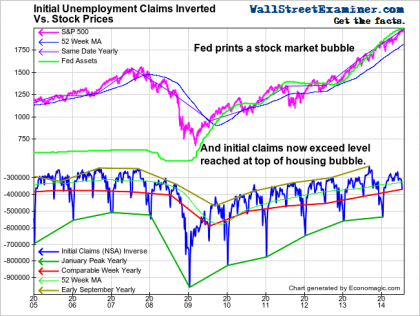 Make no mistake, this is a world record extreme. The actual number for this week is also below the number reached at the top of the internet/tech bubble in 2000. That’s both in relative terms as a percentage of the workforce, and in absolute numbers.

The headline number is seasonally adjusted (SA), therefore fictional. It may or may not give an accurate impression of reality, depending on the week. The manner in which the mainstream media reports the SA number gives little indication that by historical standards the numbers represent a danger sign.

No one is ringing alarm bells. Some have read the warnings I’ve posted here in previous months and ridiculed them. Bulls view this condition as a sign that the economy has reached “escape velocity.” Bears suggest that this is” as good as it gets.” I think it’s even more ominous.

Actual initial unemployment claims were 14% lower than the same week a year ago. The normal range of the annual rate of change the past 3.5 years has mostly fluctuated between -5% and -15%. The current number is a continuation of the bubble trend.

The actual week to week change last week was a decrease of 78,000. Decreases are normal for this week of July. The current number is stronger than the average change for this week of a decline of 64,000. The comparable week last year saw a drop of 71,000.

New claims were 2,092 per million workers in June nonfarm payrolls. This compares with 2,144 per million in this week of 2007 and 2,120 per million in the comparable week of 2006, at the very top of the housing bubble. In September 2013, this figure set a record low. In each ensuing week the numbers have remained at or near record levels. The current number is also less than the number hit during the same week of 2000 at the top of the tech bubble. 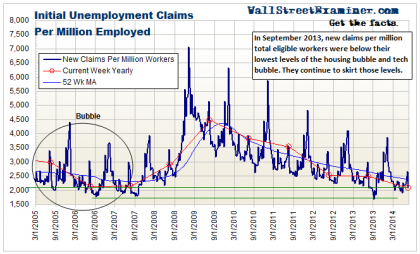 A soft economy with high unemployment, but where hardly any workers are laid off each week suggests that employers are holding on to the workers they have with the skill sets they need because they cannot find those skills in the enormous pool of unemployed workers. The labor market of those with needed skills is tight. The recent surge in job openings shown by Janet Yellen’s favorite measure, the JOLTS Survey (Job Openings and Labor Turnover), supports that view.