Perhaps the greatest speculative mania of all time was Kuwait’s Souk al-Manakh stock bubble in the early 1980s, which is as fascinating as it was devastating. The bull market began when investing in local “Gulf Companies” became in vogue with Kuwaitis who wished to ride the 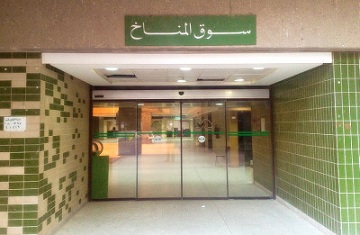 coattails of the Middle East’s oil-driven economic boom of that time. A peculiar Kuwaiti custom allowed traders to pay for stocks using post-dated checks, under the assumption that default would be unthinkable. Unsurprisingly, human avarice prevailed as some traders speculated in stocks paid for by billions of dollars worth of unsecured checks, causing the stock market to inflate like a balloon and pop in a most analogous manner.

How Kuwait’s Souk al-Manakh Bubble Inflated
The rise in oil prices in the late 1970s generated an unprecedented amount of wealth in the oil-rich Persian Gulf countries, with Kuwait receiving a particularly large share of the fortune. As U.S. stocks embarked down a perilous bear market, Kuwaiti shares were experiencing a seemingly unstoppable bull run as nouveau riche Kuwaitis turned to stocks as an investment vehicle to park their wealth. The bull market was abetted by the small supply of publicy-traded Kuwaiti companies, which consisted of “only a few dozen uninteresting companies [that] were traded on the official exchange.” (1) The scarcity was the result of the royal sheiks’ reluctance to grant the corporate charters necessary for companies to become publicly traded for fear that companies “might become vehicles for stock speculation.” (2) Kuwaiti investors, however, weren’t very concerned with risk, as their collective memories recalled a market panic in 1976 and 1977 in which “the government had moved in to support prices, buying heavily for its own account, so that nobody would suffer.” (1) These traders assumed that the government would always be on the sidelines ready to bail the market out if needed in the future, in effect, creating a floor underneath stock prices as well as a classic moral hazard.

By the summer of 1981, an unofficial over-the-counter stock market was formed called the Souk al-Manakh, which specialized in the trading of highly speculative “unregulated non-Kuwaiti companies,” such as those incorporated in Bahrain or the United Arab Emirates. (3) Formerly a camel trading venue (1), the Souk’s history was long intertwined with trading. Not long after the Souk’s founding, the market became a hotbed of speculation, overflowing with “portly gentlemen in flowing white gowns 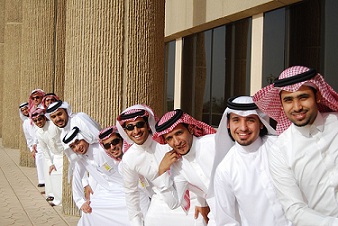 (thobes) with capacious pockets full of papers, worry beads in one hand, cigarette in the other.” (1) Interest in Kuwait’s heavily-regulated official market dwindled as the Souk earned the reputation of being the more exciting of the two markets, in which one could double their money within a few months. Sharing more similarities with a casino than a stock market, the Souk al-Manakh attracted wealthy high-rollers whose preferred method of trading entailed placing orders via car phones. (1) Boredom during Ramadan spurred daily flurries of trading activity that lasted well into midnight as trading became a form of entertainment. (1)

Souk stocks were “Gulf companies” that were incorporated outside of Kuwait and not subject to Kuwait’s regulations, with business interests ranging from property to poultry farming (4). Fitting the market’s gambling nature, most of these companies were little more than “shell games” (2) with very little in the way of assets, let alone earnings, “with only about half of the Manakh companies even publishing annual reports.” (1) Company fundamentals mattered very little, however, to traders who regularly saw these same stocks rising 20 to 50 percent a month (1). According to “Collapse of the Souk”: ” Eventually, the securities of fifty-four real and ficitious off-shore companies were traded on the Souk with no relation to company performances or prospects. Most of these companies had been established as recently as 1979 or 1980.”

Adding fuel to the fire was the type of informal margin financing through the use of postdated checks, which were accepted as a cash equivalent, as per Kuwaiti custom. This type of personal credit didn’t require a bank balance; the “receiver hopes that there will be one when the due date rolls around.” (5) Kuwaiti culture mandated that payment would be made, as a default would have violated the tradition of trust (1), as well as brought shame upon the defaulter’s entire family. The rapid influx of speculative capital caused Kuwaiti stocks to skyrocket, with Souk shares increasing by 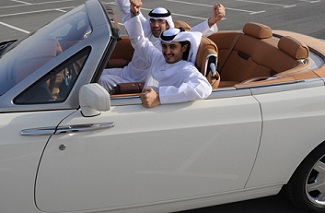 an average of 63 percent in 1981. (3) The prospect of nearly instant wealth proved too enticing, causing many Souk traders to draw against funds they didn’t have, convinced that they could simply sell off their shares to raise cash when the checks came due. This type of speculation involved financial leverage, which can greatly amplify any gains or losses in the underlying market. Greed caused traders only to see themselves tripling their money as compared to the equally plausible scenario in which they could have incurred large debts, resulting in bankruptcy. Trading on the Souk epitomized financial Russian roulette. Stock speculation fever gripped Kuwaiti culture as thousands of traders, with little business experience, rushed to get their hands on any stock they could find.

As the Souk al-Manakh market soared to incredible new heights, many speculators became willing to issue postdated checks for double or triple a stock’s purchase price, confident that the share prices would rise by that much by the time they had to pay. (1) An informal futures market arose in postdated checks as investors, upon receiving their shares, used them as collateral to borrow even more money for stock speculation. The traders who had received the double or triple-premium postdated checks in return for selling their stock then proceeded to discount the checks in return for cash; that cash was then parlayed into an even larger stock investment. (3) Like the Dutch Tulip Bulb Mania and the South Sea bubble before it, the Souk al-Manakh “miracle” was an illusion – an inverted pyramid reliant upon exponentially increasing share prices for its continued existence. 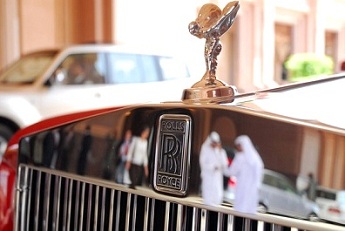 Word of the Souk al-Manakh “money machine” spread like wildfire around the Middle East, causing wealthy Palestinians, Egyptians and Pakistanis to purchase stock through Kuwaiti nominees as only Kuwaitis could trade legally. Non-Kuwaitis were just as eager to invest despite their lack of legal standing. At the boom’s peak in 1980-1981, some stocks were advancing 100 percent per month, with some advancing tenfold. One stock, The Gulf Company for Industrial Development, even advanced fifteenfold. The combination of extreme stock gains and astronomical amounts of leverage made many speculators millionaires and billionaires many times over.

The IPO market flourished as enterprising and crafty business people sought to take advantage of the credulous investing public’s insatiable appetite for shares of all kinds. Scam companies were spawned overnight, with neither customers nor products, while legally escaping the regulation of Kuwaiti authorities. One IPO example was formerly a failed $100 million real estate venture that was converted to a hospital, called “Gulf Medical,” and taken public by the individuals looking to recoup their initial investment. So successful was the IPO that it was 2,600 times oversubscribed and “for a whole week, one to two planeloads of completed subscription forms arrived daily from around the Middle East.” The investment bank hired forty Egyptian schoolteachers to process the stacks of paperwork. Over the next few months, Gulf Medical proceeded to to advance 800 percent, garnering the owners a handsome profit. (1)

Shares of investment companies that invested in other Souk stocks were among the more popular types of stocks traded, creating a large amount of overlap between stock opportunities as well as serving to inflate the market as whole. Even more preposterous were the “Fund of Funds of Funds” – investment funds that specialized in investing in companies that invested in other Souk al-Manakh-traded companies. Each investment fund sold at large premiums over their assets (1), highlighting their sole purpose of making a quick profit at the expense of their investors.

The height of the society-wide insanity occurred when eight speculators, known as “the Cavaliers,” floated a total of $55 billion in postdated checks, seemingly in an attempt to corner the market. The most prolific check writer among the Cavaliers was Jassim al-Mutawa, a Passport Office employee in his early-twenties, who managed to pass off $14 billion all by himself. Sloppy accounting on the part of his brother and partner, Najeeb al-Mutawa, caused Jassim to become a staggering $3.4 billion overdrawn. (1) According to “Collapse of the Souk”:

“Eventually, approximately 29,000 checks – amounting to $93 billion – were estimated to have been written against the shares of companies that were, for practical purposes, worthless.”

Even government leaders weren’t immune to the stock speculation fever, with members of the ruling al-Sabah party and members of Parliament trying their luck in the market. It was even rumored that the Minister of Commerce, Jassim al-Marzouk, tried his hand in the market, despite it being his responsibility to regulate it. (1)

The vast pools of cash being pumped into the market resulted in over 3.5 billion shares having traded hands by early 1982 (4), with Kuwait’s total market capitalization rocketing from $5 billion to an unsustainable $100 billion . (1) Despite Kuwait’s tiny population, its market capitalization was the third highest in the world, behind only the United States and Japan. (2) By late 1982, “share prices commonly doubled by the hour and no price was considered too high to pay for a share.”(4) Stories abound of outsiders questioning the Souk al-Manakh market’s sustainability, only to be dismissed with quips such as, “But things are different here. Our government can’t permit a collapse” (1), and “You Westerners have been coming here for five years….you all have predicted a crash. Don’t you understand, there has never been a place on earth like the Gulf with such unprecedented wealth? You will never understand that the Gulf market cannot crash.” (2) As with the Dutch Tulip Bulb mania, the Mississippi Bubble, the South Sea Bubble, the Roaring Twenties bubble and the Dot-com Bubble, investors thought they were in a “New Era.” The Kuwaiti version of the “New Era” stemmed from their taking for granted that the government would support share prices and the assumption that the Persian Gulf oil economy would keep soaring to even more spectacular heights.

How Kuwait’s Souk al-Manakh Bubble Popped
In August of 1982, a female speculator presented one of Jassim al-Mutawa’s postdated checks for payment ahead of its due date, catching him unable to pay his debts. Within an instant, the Souk al-Manakh house of cards imploded, throwing hundreds of speculators into default. 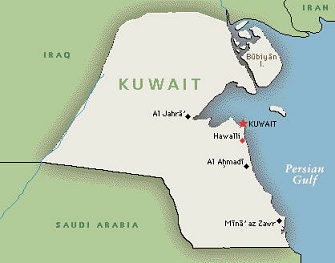 Gulf Medical lost 98 percent of its value. To make matters worse, a glut of oil suppressed prices, dropping Kuwait’s 1982 oil revenues to only a quarter of those in 1980. Most devastating was the statement by Kuwait’s new finance minister, Abdelatif al-Hamad, indicating that he had “no intention of supporting the market at the insane levels to which it had risen” (1), preferring that “speculators should pay for their sins in accordance with Islamic tradition.” (3) The Souk’s decline was so instantaneous and dramatic that it couldn’t even be considered a crash, as “there were simply no bids.” (2)

By September 1982, the Ministry of Finance ordered all dubious checks to be turned in for clearance, tallying the value of worthless checks at $91 billion. (5) The final result of the world’s greatest speculative mania was a loss equivalent to $90,000 for every Kuwait man, woman and child (3) and commerce slowing to a trickle.Soon after, Kuwait’s government shut down the Souk al-Manakh, built a new stock exchange and started over again.