When The Fed Head Becomes A Jenny Ass 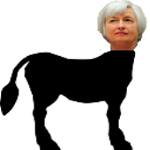 Federal Reserve Chair Janet Yellen’s at the top of her game.  She knows exactly what to do.  She’s a PhD economist, after all.  Her various affiliations with the Fed go back nearly 40 years.  She knows what the correct Fed response is for every situation.  She knows all.

But Yellen has her work cut out for her.  Attempting to pilot an economy via monetary policy is not for a feeble mind.  There are some answers that aren’t to be found in a textbook.  There are other answers that aren’t present in graphs or dot plot charts.  Sometimes squinted eyes, a furrowed brow, and deliberate prevarication are needed to parse out precisely what to do.

The latest jobs report, and a 5 percent unemployment rate, tells Yellen she should raise the federal funds rate in December.  Yet, according to orthodox central banker tenets, there are plenty of reasons why she shouldn’t.  For example, U.S. manufacturing’s still on the fritz.  Raising rates now could be the ringing of its death knell.

Yellen wakes each morning, sips her coffee, and peers out across the economic landscape.  Fog, smog, and condensation haze her view.  More and more disclarity greets her with each passing day.

The unemployment rate is low.  But so is the labor participation rate.  New jobs created since the Great Recession have generally been shabby.  So has economic growth.  Prices appear that they want to deflate.  But Yellen wants them to inflate.

Nonetheless, Yellen has a job to do.  She must fulfill the Fed’s dual mandate of maximum employment, stable prices, and moderate long-term interest rates.  Somehow the decision between more ZIRP and a 0.25 percent increase to the federal funds rate will make all the difference between successfully achieving this and utter failure.

Obviously, this is completely absurd.  But this is where years of radical monetary policy have taken us.  The economy and financial markets have become so dependent on exceptionally cheap credit that the contemplation of anything marginally less results in great agitation.  The dollar grunts.  Stocks grimace.  Larry Summers flatulates.  Paul Krugman does his monkey face.

Hindsight, of course, is always 20/20.  But what is it that would support a Fed rate hike now that wouldn’t have supported one six or twelve months ago?  In other words, what has changed that would prompt an increase now from before?

Nothing that’s readily material.  To the contrary, the case could be made that Yellen’s sweet spot for raising rates has come and gone.  She had her chance in 2014, before oil prices crashed and world trade shuttered, and acted with the arrested development of a myocardial infarction.

Is Janet Yellen a Jenny Ass?

So what should Yellen do?  Naturally, there are plenty of things she could do.  In fact, many of them would be a much better use of her time than monkeying around with money and credit.

Yellen could resign from her position at the Fed and bake cookies for the local rotary club.  She could contemplate an adjustment to her bowl haircut.  She could go shopping for Christmas sweaters.

These endeavors would all be more beneficial to the world than navel gazing the needle of the federal funds rate.  But this is all Yellen knows.  She’s been agonizing over it her entire career.  Now that she’s finally the master lord, she wants to get her monetary policy right.  She doesn’t want to get it wrong.

But what is there to really get right or wrong at this point?  Zero bound verses a 0.25 percent increase…is there really a difference?  A federal funds rate increase of 0.25 percent is hardly normalization.  It still represents extreme intervention into credit markets and the economy.  It will still result in massive asset price distortions and dangerous market instabilities.

No doubt, Yellen’s fears of getting it wrong have brought her to this unflattering moment.  She’s intractably inferred, obstinately threatened, persistently jawboned, and stubbornly contorted for two years – or more – that the great lift off would always come very, very soon.  Now she must follow through…or she’s a jenny ass.

Return from Is Janet Yellen a Jenny Ass? to Economic Prism