When “Up” Is Still Heading Down: Why Bubblevision Is Clueless About Consumer Confidence Surveys

As usual, the Conference Board and all the major media press release repeaters put a positive spin on the highest reading of Consumer Confidence (aka the Con Con Con) since October 2007. None of the media echo chamber reports pointed out that October 2007 was the beginning of the worst bear market in US stocks since 1973-74. So I thought it important that the issue be given a little perspective (as I did recently with the Thompson Rhoiders Michigan Con Index).

First things first, the Con Con Con is an amalgamation of the results of two survey questions presented to “consumers” (aka real people). One question asks people how they view the current status of the economy, which is useful because most people are capable of seeing the present reasonably accurately. The other question is what they think conditions will be in 6 months, as if anybody knows the answer to that. While real people may be far better at answering that question than Wall Street and academic economists and media echo chamber pundits… I mean really… Ask a stupid question get a stupid answer. So then the Con Con Con takes the useful index of Present Conditions and combines it with a completely stupid index of what people think the future holds, and thereby creates a stupid and useless composite index.

Given that, let’s just focus on the one measure that might be meaningful, the Present Conditions index. The chart created by Briefing.com, with a little technical analysis and annotations added by yours truly, gives us that which is missing in the media echo chamber reporting… perspective. The graph speaks for itself. The long term trend is down. Note that the index is based on the average reading in 1985 being 100. The peak reading of around 185 was reached at the end of the tech bubble. Another peak around 140 was reached at the top of the housing bubble, when virtually everybody had a home equity ATM. The current reading remains below the 1985 average at about half the peak level. 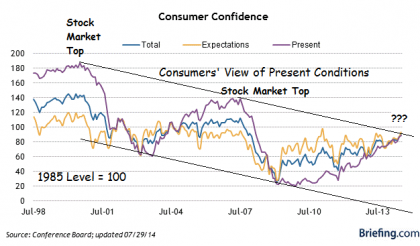 The trend reflects the decline in standard of living that an increasing number of Americans have been experiencing for the past 15 years. After a 5 1/2 year rally in stocks and consumer attitudes, those attitudes are almost all the way back to the average 1985 level. Whoop de doo.

Aside from the fact that a house divided against itself cannot stand, and neither can an economy carried by a few people doing exceptionally well at the top of the wealth spectrum, the chart also shows that the current Con Con Con Present Conditions reading has reached the top of the long term trend channel. From the standpoint of technical analysis, this is a good reason to be cautious now, especially considering how far the stock market bubble and housing price bubble have progressed.

The Fed has driven these bubbles with QE and ZIRP. Pressured by its critics, both from without and within, the Fed has recently gotten cold feet, so it is slowly shutting down the money pump that has been inflating these asset bubbles, and allowed consumer attitudes to rebound back to the long term downtrend over the past 5 years.  Sentiment has now reached a level where a rollover in the present conditions reading at any time in the next few months could be an indication that the next great bear market is beginning, just as it signaled and coincided with the onset of the last two great bear markets. If this index does roll over from a third lower peak, an even greater decline in the US median standard of living could be forthcoming.

The answer is yes and no. The facts behind that get a little technical. The Fed is not the only big central bank in the world, and all of the big 3 pump cash into the same pipelines.  I sort through those issues in my weekly analysis of central bank behavior as it impacts markets.

So, ladies and gentlemen, place your bets. Is this as good as it gets, or the threshold of a brave new world? This indicator should give us an indication one way or the other over the remainder of 2014.