Who Is Really The Smart Money and Are They About to Destroy Themselves and Us Again?

The Wall Street media is fond of reporting what the “smart money” is doing. They might tell you that institutional investors are holding lots of cash, or that hedge funds are short, or that bank portfolio managers have a high allocation to stocks, or to bonds. They’ll tell you about record outflows or inflows into mutual funds, and how much cash fund managers are holding.

They’ll cite all manner of surveys of institutional investors. State Street has one. BunkoAmerica Merrill Lynch Mob has one. The Investment Company Institute has a couple. I have barely scratched the surface.

But ask yourself this question. How come they don’t beat the market consistently? The majority of institutional investors don’t. As a result, passive investing with index funds has become all the rage. Thanks, John Bogle.

Wall Street and its media handmaidens have a dirty little secret. They know that institutional investors, mutual funds, pension funds, bank trust companies, hedge funds and the like are just customers. Big customers for sure, but they’re no more likely to beat the market than small investors who take responsibility to know a little about what they’re doing with their money.

So, then if institutional investors are just big dumb customers ripe for fleecing by Wall Street is there really any smart money? And if there is, just who might it be?

Yes, Virginia, there really is smart money. Who are the smart money people? The answer is very plain. It is Wall Street itself–the dealers who run the markets. There’s a reason they are called market makers. They make the markets. It’s “their thing.” It is their job to accumulate inventory at low prices, and then mark up that inventory to higher prices and sell it to the dumb money.

No, not small investors like you and me. We’re actually a lot smarter than CNBC gives us credit for (does anybody among us actually watch CNBC any more)? And we’re too small to matter to the dealers anyway, which gives us an advantage, but that’s a story for another day. The dealers are aiming for the big dumb money. The dealers have made it their business and their game to know exactly how to manipulate the big dumb money so that they, the dealers, can buy securities low and sell it to the dumb money high.

The dealers know how to run this skimming game while managing to let the dumb money keep most of their money most of the time. The smart money even allows the dumb money to share in a piece the spoils of the game of marking up the prices of stocks, bonds, and whatever other manner of securities and derivatives Wall Street can manage to dream up. After all the dealers don’t want their customers to run out of money. That would end the game.

The most important of these dealers are known as the Primary Dealers. They are a select group of broker dealers, nowadays virtually all of them bank holding company subsidiaries. These dealers are selected by the Federal Reserve Bank of New York to be the sole counterparties with the Fed in executing the trades that implement monetary policy and interest rate policy.

Part of their responsibility includes standing by to purchase US Treasury securities when the US government sells newly issued debt. Nowadays, that’s every week, and virtually every day. As part of this responsibility the dealers have the privilege of having direct lines to the Fed and the US Treasury. You’d better believe that they are on line with each other, every day, all day, talking about how to execute trades to meet the expectations of the policy makers, and most importantly to assure their own profits.

Here’s a list of the current primary dealers.  You will instantly recognize many of the names.

There you go, 23 of them. You will even note that 7 of them are US based! Wow. 7 out of 23. So when the Fed pumps money into the market via the Primary Dealers, more than 2/3 of the recipients of the cash are non-US banks. Are they under some obligation to keep the money here? No, but why would they want to go anywhere else? Wall Street is the sweetest game in town.

Believe it or, once upon a time, John Corzine’s MF (Mother Effin) Global was  on this list. And perhaps you’ll remember other names from long ago, like Bear Sterns and Lehman Brothers. Then there was that time that the dealers all got together and told Treasury Secretary Henry Paulson, that you better give us money, or we’re going to blow up the whole damn world because we screwed up so bad.

Even now there are two primary dealers who are essentially bankrupt. One is the German Giant, Deutsche Bonk. The other is RBS, a ward of the British state, currently embroiled in a huge scandal over in the UK for using strongarm scams to steal money and put businesses out of business.

Wait a minute!  Aren’t these guys the smart money?

The answer is yes, and no. They’re master scammers, that’s for sure. And they run their scams for years at a time. Decades even. But they get too greedy over time, and they begin to believe their own hype. That’s when they get in trouble, and get us in trouble. 2007 wasn’t so long ago that we don’t remember. But somehow, the dealers who were at the very center of the crisis have whitewashed the slate. Helped by their bureaucratic and political cronies they were never held responsible, and their malfeasance has been whitewashed from our memories.

But here’s the thing. Hubris may have led them to make a very big mistake, just like they made in 2007.

At that time the Primary Dealers were holding record short positions in US government securities. They had placed the biggest bet in history that bond yields were going to soar and prices were going to crash. Boy were they wrong! In July of 2007, the dealers had a record net short position of over $160 billion in Treasury notes and bonds in their trading accounts, while Treasury yields were at 5%. The dealers had bet that yields were going higher from there. That wasn’t smart. It was reckless and stupid. 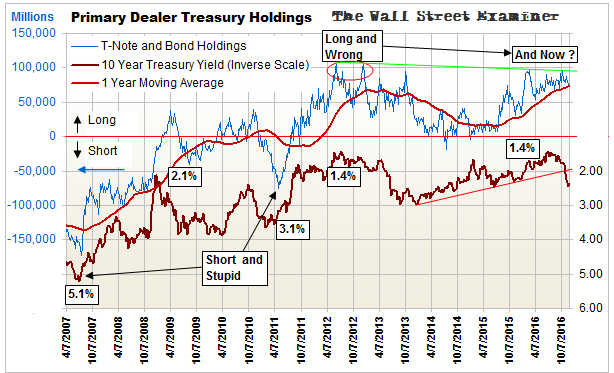 It was that huge position that was the trigger for the massive reversal and huge bull move. When the market started to go against them the dealers had to start buying in their short positions, suffering massive losses that were at the core of the crisis.

Believe it or not, the dealers repeated their mistake. Look at what happened in 2012. The dealers went short again in April of that year. Yields were at 3.1%. Again they were forced to cover, and their actions helped push the 10 year Treasury to a yield of 1.4%. Dealers furiously covered their shorts and flipped to an all time record long position of over $100 billion. They actually hit that level twice in 2012. It was a perfect double top on the chart.  That was the peak of the bull market in prices, the low in yields. Dealers were forced to sell as yields rose to 3% by early 2014.

Now comes 2016. Twice in the past year, the dealers built near record long positions, reaching a trendline extended from the twin peaks of 2014. Now, Treasury yields, since hitting their lows July, are headed up again. They have broken a trendline from 2013. At the same time, dealers have held on to most of their long positions. Their net position is now at $69 billion. They are taking another beating.

Has their greed gotten the better of them again? And are they going to go down the drain and take us with them this time, just like in 2007? The action of the market and the dealers trading positions over the next few weeks could send us an important signal. I’ve been bearish on Treasuries for technical reasons since last July. In the next few weeks we should have either a new sign that bond yields are headed back down, or confirmation that they will continue to head toward higher levels, in a young bear market.