By Devon Herrick at National Center for Policy Analysis

Many Americans begin to experience normal aches and pains as they age. They also become increasingly at-risk for a form of heartburn called acid reflux. Drugs to treat acid reflux, including prescription Prevacid and Nexium, were expensive a decade ago — costing nearly $5 per day. At the time, pain medications that did not irritate the stomach, and costly heartburn medications, were among the fastest rising drug costs health plans faced.

Common pain relievers, including aspirin, ibuprofen and naproxen, are from a drug class known as nonsteroidal anti-inflammatory drugs (NSAIDs). They are prone to irritate the stomach if taken frequently in high doses throughout the day. A newer class of pain medications that doesn’t irritate the stomach, called Cox-2 inhibitors, includes the drug Celebrex. Cox-2 inhibitors are the preferred pain reliever for those who cannot take NSAIDs on a long-term basis. Cox-2 inhibitors are expensive; a decade ago, Celebrex cost from $945 to $1,201 per year, far more than common NSAIDs. At the time, researchers found that taking prescription heartburn medication with common pain relievers could mimic the benefits of the costly pain drugs, but did not deliver any cost savings due to the high price of prescription heartburn treatments.

Specialty versus Over-the-Counter Drug Costs. A lot has changed in the past dozen years. The costly heartburn drugs, such as Prevacid, Nexium and Prilosec, are now available over the counter (OTC) for $0.31 cents to $0.56 cents a tablet. Even the pain medication Celebrex is now available in generic form for around $2 apiece depending on dosage (or about $646-$854 per year). [See the figure.] 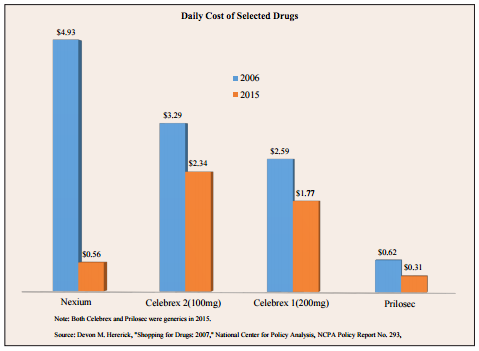 So it stands to reason that costly pain medications — a source of considerable expense to health plans a decade ago — also should be a thing of the past. But that is not the case. So-called “specialty drugs,” very expensive niche therapies for relatively rare conditions, now account for one-third of all drug spending. With a small segment of drugs — about 1 percent of drugs prescribed — accounting for nearly one-third of drug expenditures, some drug makers are on the lookout for ways to cash in. One drug maker had an idea: reformulate two existing over-the-counter (OTC) pain relievers, perform relatively simple clinical trials on them, sell them by prescription and price them as though they are specialty drugs.

Turning OTC Drugs into Expensive Prescription Drugs. The New York Times recently profiled a pair of two ultraexpensive pain relievers being sold by Horizon Pharma. The drug maker owns two different NSAID pain relievers, both designed to not irritate the stomach. The medications, Duexis and Vimovo, are both priced at more than $1,500 for a 30-day supply. They are also both combinations of drugs that are available without a prescription!

Duexis versus Generic OTC Drugs. A daily dose of Duexis requires three pills, each taken at three intervals throughout the day. Each pill contains 800 milligrams of ibuprofen and 26.6 mg of famotidine. Ibuprofen is the active ingredient in Advil, which is available over-the-counter in 200mg tablets. Famotidine is better known as the OTC heartburn medication, Pepcid. Pepcid is available in 20mg generic tablets.

Someone taking one generic Pepcid (famotidine) 20mg tablet and three generic 200mg Ibuprofen tablets every six hours would ingest the same daily dose as taking one Duexis tablet every eight hours. The total cost per day of using the OTC equivalent would be $0.51 cents. That’s a significant savings off the $51 dollar price tag it would cost to take Duexis.

Vimovo versus Generic OTC Drugs. Horizon Pharma’s other pain reliever, Vimovo, is a combination of Nexium and Naproxen. Naproxen is the same drug as OTC Aleve. Vimovo is available in either 375mg or 500mg dose of naproxen, each combined with 20mg of Nexium, a common heartburn remedy that is also available over the counter. Once metabolized in the body, its chemical composition is almost identical to an older heartburn medication, Prilosec (omeprazole). Rather than take two Vimovo pills per day at a cost of about $50 — one every 12 hours — you could take two 220mg naproxen tablets, along with one generic 20mg omeprazole tablet, every 12 hours. Doing it this way would cost only about $0.80 cents per day — much less than the $50 to $55 daily cost for Vimovo.

Gouging Health Plans and Consumers. To prevent patients from experiencing sticker-shock when filling their prescriptions, drug makers sometimes provide patients with coupons or debit cards to cover their cost-sharing. This allows patients to pay little-to-nothing for their costly medications, but costs health plans more than they would likely spend if the tiered formulary cost-sharing for nonpreferred drugs were not circumvented. This practice is not legal under Medicare, which considers it an illegal kickback. But it is not against the law when drug plans are sponsored by insurers and employers.

When it can, Horizon Pharma asks doctors to bypass local drug stores and submit prescriptions directly to its mail-order specialty pharmacy. The drug maker then waives most patient cost-sharing, but collects fees from insurers. This strategy lessens the chance customers will balk when their local drug store requires them to contribute exorbitant copays.

It may seem a little odd that a drug maker is reformulating cheap, over-the-counter remedies into combination drugs sold only by prescription at a cost of $17 to $25 per tablet. The equivalent ingredients would cost only $0.17 cents to $0.40 cents at a discount pharmacy. Why would a drug maker do this? The short answer is: because it apparently makes them money. Their business model essentially involves gouging insurers and health plans, which ultimately costs consumers.

Conclusion. A consumer would never knowingly spend $50 per day for drugs available over the counter for $0.50 to $0.80 cents. This only occurs when patients pay nothing while third-parties pick up the tab. The way to keep drug prices low is to provide consumers with incentives to make prudent choices. The U.S. Food and Drug Administration also needs to clear the backlog of nearly 4,000 abbreviated new drug applications from firms wanting to compete in the generic drug market. Competition and incentives are a better way to keep drug prices low than price controls.