The Fed hawks don’t matter. The doves do!

Doubtlessly, the Fed will flip-flop in its elegant manner about rate increases as it has been for over two years, but this time a reliable dove flipped. That itself is scary to the markets. And the reason he mentioned for flipping sent cold chills down their spine.

He named one of the biggest and riskiest asset bubbles, commercial real estate. It doesn’t plateau. But it either booms, driven by cheap credit, lots of liquidity, and endless hype. Or it crashes. And he worried that banks and coddled investors, including holders of commercial-mortgage backed securities, will get hit by the shrapnel.

When Boston Fed governor Eric Rosengren, a voting member of the Federal Open Markets Committee, where monetary policy is decided, shared some aspects of his worries on Friday morning, markets tanked instantly.

This came just after the ECB’s refusal to please the markets with promises of additional bond purchases. Instead, it stuck to the promises it had made previously. What a disappointment for markets running on nothing but central-bank mouth-wagging and money-printing!

By the time the ECB’s failure to please and Rosengren’s scary comments hit the trading algos Friday morning, Dow futures had plunged over 100 points. At the end of the day, the record long calm of the S&P 500, lasting 53 trading sessions, got busted viciously to the downside. The index plunged 2.45%, the worst day since the Brexit-vote sell-off of June 24.

Oil plunged 4%, more than wiping out the head-fake rally the day before.

No one cares when the Fed hawks squawk about rates being too low, or whatever; they always do that, and that’s why they’re hawks. When it comes to set policy, they’re shoved aside.

But when a solid dove like Rosengren squawks about rates being too low and “waiting too long to tighten,” and when he frets about bubbles that could go haywire and do some real damage, suddenly markets break out in cold sweat.

In his speech, Rosengren discussed how the US economy has been “fairly resilient” and is near “reaching the Federal Reserve’s dual mandate from Congress (stable prices and maximum sustainable employment),” despite all the global headwinds, some of which he enumerated. And so, he said, “a reasonable case can be made for continuing to pursue a gradual normalization of monetary policy.”

Hence, rate increases, even though there were some “conflicting signals” in the economic data – “Clearly, the first two quarters did not live up to the forecasts,” he said. But “waiting too long to tighten” would expose the economy to two risks:

First, the economy overheats – the belated tightening might “require more rapid increases in interest rates later in the cycle,” which will likely “result” in a recession, as it did “frequently” in the past.

And second, asset bubbles – “that some asset markets become too ebullient.” He pointed at commercial real estate prices that “have risen quite rapidly over the past five years, particularly for multifamily properties.” He added:

And what a bubble it is. Over the past 12 months, prices have jumped only 6%, according to the Green Street Commercial Property Price Index, compared to the double-digit gains in prior years. “Equilibrium,” the report called it. The index has soared 107% from May 2009, and 26.5% from the peak of the totally crazy prior bubble that ended with such spectacular fireworks: 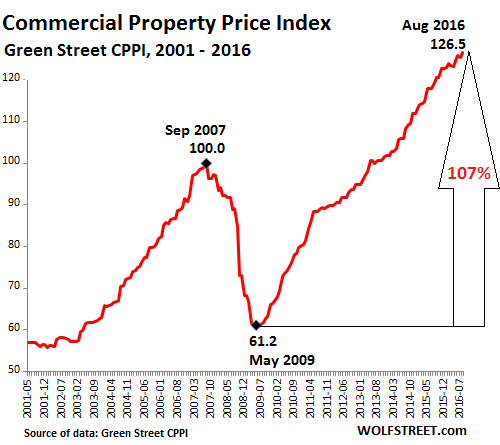 Not all sectors are still booming: Lodging is down 12% over the past year, health care is down 1%. But strip retail malls are up 4%, office space 5% – which includes some sour grapes, such as Houston’s office market that is sinking into deep trouble – apartments are up 6%, industrial space 7%, and big malls 8%, despite the brick-and-mortar retail woes reverberating through the economy.

[T]here are also longer-term risks from significantly overshooting the U.S. economy’s growth – given the bluntness of monetary policy tools, and the possibility of growing imbalances in some asset classes (emphasis added).

So not just a bubble in commercial real estate, but bubbles in “some asset classes.” Plural. He didn’t mention the remainder of the asset classes that have gone out of whack and are waiting to deflate, but they’re obvious for all to see and don’t need to be mentioned.

This comes with a delicious irony: it took a reliable Fed dove to see these bubbles and point them out publicly, though the hawks should have seen them and fretted about them years ago.

Scratching beneath the surface, what I get is this: For Rosengren and folks who think like him, the threat of asset bubbles imploding with devastating consequences once again may be moving into the foreground, regardless of how weak the economic data may be. And there are plenty of reasons to believe that they’ve already waited way too long.

For businesses in the US that have believed in the Fed and Wall Street hogwash for six years, reality is now setting in. Read…  The Great Debt Unwind Beneath the Surface: US Commercial Bankruptcies Soar