By Adam Andrzejewski at Forbes

In 2014 I wrote in Forbes about a pair of union lobbyists who substitute taught for one-day in the public schools and then started collecting over $1 million of lifetime public ‘teacher’ pension payout – despite a state law expressly designed to stop them.

Now, after recent Illinois Supreme Court decisions confirming that pension benefits are constitutionally guaranteed (including the pensions for the pair of union lobbyists above), the public employee gravy train is running faster than ever. 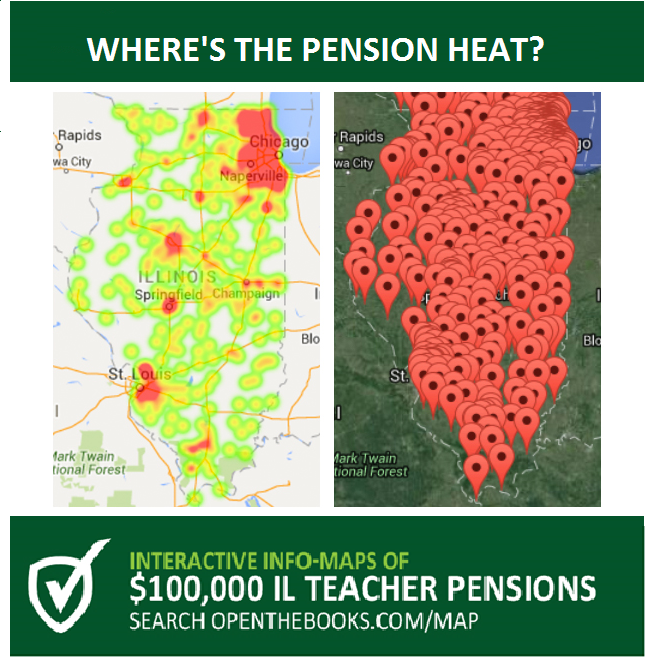 This week, our organization at OpenTheBooks.com debuted our interactive info mapping platform giving context to the 7,499 retired Illinois educators who pulled-down a pension of $100,000 or more. These retirees cost Illinois taxpayers $900 million (2015). Individually, these pension millionaires contributed so little to the system that they ‘broke-even’ on their ‘cost-basis’ within the first 20-months of retirement.

It takes the equivalent of all income taxes paid by 330,177 individual Illinois taxpayers to fund the nearly $1 billion for the 7,499 ‘highly compensated’ six-figure retirees. By any estimation, this is unsustainable. Illinois only has 6.2 million people with jobs.

But, it quickly gets much worse. Our data and analysis at OpenTheBooks.com shows that by 2022, over 20,000 Illinois teachers/administrators will have pensions exceeding $100,000 annually.

Locally, school districts are spiking salaries – granting raises near the end of a career to raise guaranteed pensions – which drives costs even higher. Taxpayers are fighting back in creative ways (read my Forbes piece on the ‘Shouse/ Tiny house’ movement in Illinois) but systemic abuse persists.

The public pension largess is not only for government educators, but also private education associations and union bosses. For example, Reginald Weaver was President of the National Education Association (NEA) in Washington, D.C. – the de facto national teacher’s union. Weaver’s Illinois teacher’s pension is now $22,759 per month, or $273,108 annually.

Moreover, many administrators taking six-figure pensions really aren’t even ‘retired.’ Twenty-one highly compensated school administrators are now members of the municipal system, not the teacher’s system. It’s double-dipping: receiving a ‘teacher’ retirement pension, while also rehired by a school under the ‘municipal’ plan.

Outside of the six-figure pension for the ‘highly compensated’ educators, there are another 100,000 pensions for rank-and-file teachers. By our calculation, $1 of every $3 collected by the Illinois income tax now goes toward these retirement annuities – that’s the equivalent of all income taxes paid by 2 million hard-working Illinoisans each year.

It’s a never-ending salary and pension party, all on your dime.