Why Oil Is Finally Declining, Which May Lead to Disaster

The price of oil has finally started to obey the law. What law is that? The Law of Supply and Demand. Thanks to the US fracking boom that has done this (see chart) to US production, the supply of oil worldwide has outstripped demand since 2012. So why haven’t prices fallen before this summer? And are falling oil prices now a good thing? Or not?

While US production was exploding, other countries had level or declining production. Meanwhile consumption was falling in developed nations, but the developing world more than made up for that. Worldwide consumption has been steadily increasing since 2009. However, because of the US fracking boom, with the exception of 2011 supply has exceeded demand. Prices should have been declining since 2012, right? 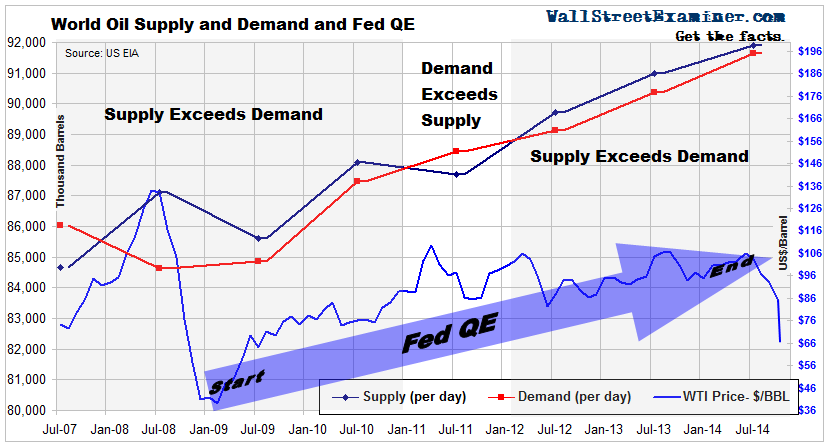 After the oil price bubble peaked in 2008, the price of oil did crash when demand dropped. That drop in demand created a huge oversupply just as the US fracking boom was in its infancy. Then the Fed and its cohort central banks started printing money helter skelter in 2009. The results showed up not only in world stock markets but in commodities as well, particularly oil. The price of oil rose in spite of the fact that world oil production continued to outstrip demand. For the biggest speculators and financiers in the world, oil was a money substitute, a hedge against the massive money printing campaigns of the Fed, the BoJ, and the ECB. It worked for a while, and the oil market even helped in 2011 when supply fell below consumption for a year. But then the US production increase again overran world wide consumption.

The price of oil fell from around $107 to $85/BBL in early 2012 after the Fed had been on hold for a year. That along with other falling commodity prices was enough to spook the Fed into starting QE3.  In spite of oil supply outgrowing demand from 2012 on, the price of oil returned to $107 concurrent with the money printing campaigns of the big central banks. With supply greater than demand for oil worldwide, the most logical explanation for this price increase is the inflationary effect of money printing as wealth holders again used crude oil as a money substitute.

The Fed announced and followed up on a program of ending its money printing operations in 2014. The speculators who were holding oil as a hedge against central bank money expansion began to sell. That trade has continued to unwind with growing urgency. The price of a barrel of crude started falling this summer (2014), leading to a crash in October and November.

The speculation of when the Fed will open the floodgates to stem these latest deflationary effects will come soon enough. In the meantime, as long as worldwide oil supply continues to exceed demand, there’s no real floor on how low the price goes until production begins to be withdrawn, and supply and consumption come back into equilibrium. From a technical perspective there’s intermediate support around $65. If and when that breaks, the next target could be major support around $30-40. 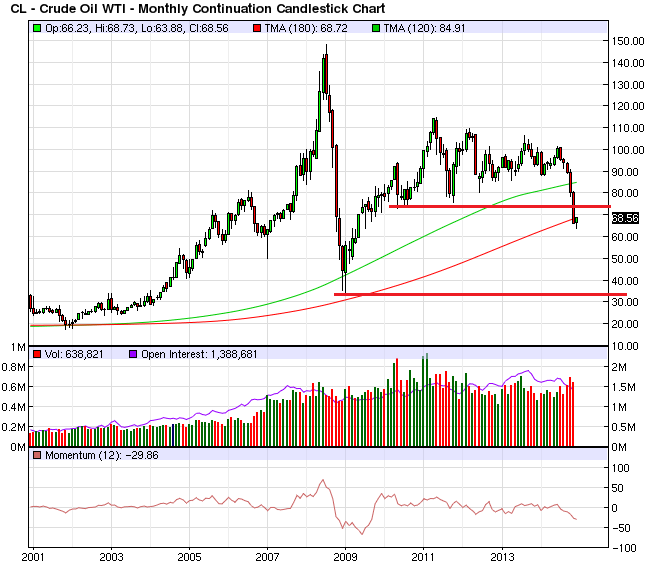 “Experts” (none of whom foresaw this collapse) have begun to speculate about when oil sands and oil shale production would come offline. That should depend not on the total cost of production, which many pundits are citing, but the variable cost. As long as the price is high enough to cover variable costs, production will continue, and may even grow for awhile. Natural gas production continued rising for nearly a year after its price fell sharply on two separate occasions.

The EIA says the lifting cost of crude in the US averaged $12.18 per barrel in the 2007-09 period. From that perspective, there’s no reason for existing production to be shut in any time soon. But what about finding and starting new wells? The costs of finding onshore oil averaged around $20 per barrel. With total cost of around $32 a barrel for onshore production, oil exploration and putting new wells into production might continue for a while longer as well. There doesn’t seem to be a reason for the supply of oil to shrink any time soon. Meanwhile, weak economies around the world should see demand growth continue to slow.

The central banks have been frustrated in their insane and misguided aim to increase inflation because QE and ZIRP actually foster the opposite of what central bankers expect. Central bankers and conomists think that to get inflation they only need to print more money, not recognizing that the inflation that does result from money printing, asset inflation, leads eventually to consumer goods deflation. ZIRP and QE cause malinvestment and overinvestment that leads to excess productive capacity. That leads to overproduction and oversupply. Oversupply puts downward pressure on prices. That spurs a vicious cycle where the central banks print more money to try to create inflation. That puts more cash into the accounts of the leveraged speculating community and off we go again.

While ZIRP and QE encourages waves of excess speculation and malinvestment, it does so at the expense of investment in labor. Businesses become speculators in their own stocks and products rather than in costly and uncertain investments in labor. The value of labor falls in the marketplace. Mass incomes fall. Consumption falls. Demand trends weaken, putting downward pressure on the prices of consumption goods. That causes a vicious cycle in business where executives perpetually look for ways to shrink costs, exacerbating the economic decline of middle class working people. The “middle class” can increasingly no longer afford to buy the products of those who employ them. Thus we get the spectacle of things like WalMart holding charity food drives to benefit its workers, who don’t make enough money to feed their families.

The oil price experience is a perfect illustration of what happens when central banks promote over speculation in commodities and commodity production. As the lifeblood of both industrial production and transportation, and as a money substitute, oil is the most important commodity in the world. A bubble economy built on the back of oil price speculation and production is placed at enormous risk when the price of the underlying good collapses. A boom built on virtually free and unlimited financing becomes a ticking time bomb when the value of the collateral collapses. The only policy solution offered is extend, pretend, and pray. How many times that will work, and for how long is anyone’s guess.

We got an object lesson from the collapse of the housing bubble. Clearly central bankers did not learn the lesson. They are about to get taught again. No doubt the mass of middle class workers and consumers will again become collateral damage as central bankers seek first and foremost to preserve their constituents, the banks and bankers who feed at the central bank trough.