Why One Economist Doesn’t Believe The March Jobs Number

A broadening Industrial recession was offset by solid service payrolls, led by Retail. Taken at face value, the breadth of growth signals a steady-as-she-goes economy.

But there are reasons to doubt the figures, starting with Retail. In the BLS model, retail is hitting a major growth spurt unlike anything seen in a decade.  In the real economy, the Retail sector’s growth is slowing.

Also troubling is the continued contraction in temp worker payrolls. Sometimes that’s a sign of conversion of part-time workers to full-time workers, but that’s not what’s going on.   Even one-offs like Personal Laundry (+5K) and Landscaping (+12K) couldn’t push Private Payrolls above 200K.

Key point: Payrolls dropped in almost every manufacturing sector, and machinery led the way (-6K).  A strong sign that 2H Industrial production is poised to contract further as investments in factory production are dropping at a faster pace.

To put that into context:

Fewer stores than ever, more big-box store closings, weak sales. And yet, most hiring ever. Hmmmmm…..

This is shown in the chart below: 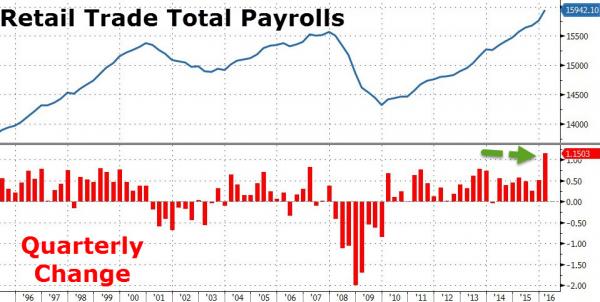