Why Retail Sales Are Faltering: Bottom 60% Of Households Have No Real Income Gains Since 2008

The largest retailers in the US are struggling to get their sales up. Walmart’s US comparable-store sales were flat for the quarter ended August 1. Macy’s reported disappointing sales and cut its forecast for the year. Other retailers have chimed in, some with better results (Home Depot, for example), some with fiascos (Elizabeth Arden, with a 28% plunge in sales).

It has been tough out there. Retail sales, which make up about a third of consumer spending, were supposed to increase 0.2% in July, according to the inveterate optimists that economists have become. But that didn’t happen.

Instead, they stagnated, not adjusted for inflation, after a measly growth of 0.2% in June. But on Tuesday, the Bureau of Labor Statistics tossed the Consumer Price Index for July into the mix. With official inflation up 0.1% for the month and 2.0% for the year, it was considered “tame” by those who clamor for more inflation because it suits their own purposes, like repressing real wages. Tame or not, inflation knocked real retail sales into contraction.

And not only for July, but also for June. Doug Short of Advisor Perspectives has been tracking retail sales on an inflation-adjusted basis for years. They’ve been recovering unevenly from the Great Recession. But then something happened in November and they stalled. They dropped in December, plummeted in January – the weather was blamed liberally – then recovered some in February and March. But since April they’ve stagnated, and actually lost ground in June (-0.02%) and July (0.05%). 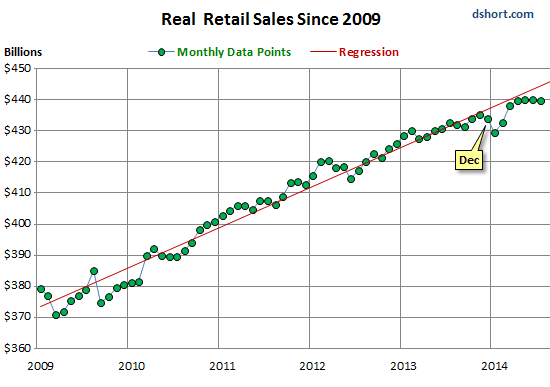 With inflation picking up earlier this year, consumers, already at their limit, got pinched, or at least the vast majority of them – those who haven’t benefited from the asset bubbles the Fed has engineered so relentlessly, those who don’t have enough money to invest in stocks or bonds, including those 60% who don’t have enough money in a bank account to pay for an “emergency expense” of $400, as the Fed itself admitted.

As if to drive home the point, the Bureau of Labor Statistics coincidentally released a study to confirm what has become the biggest economic problem in the US: those at the lower-income levels, those who’ve gotten ripped off by inflation and wages, have become terrible consumers in an economy dependent on consumer spending.

The report found that the average income of households in the top 20% grew by $8,358 per year from 2008 through 2012. But the lowest 20% saw their  already minimal incomes get whittled down by $275 per year. The earnings of the second and third quintiles increased only $143 and $69 per year. So for the bottom 60% combined, there really wasn’t any improvement.

And their spending patterns? The lowest quintile cut their spending by $150 per year in total. They cut where they could: in seven categories, totaling $490 per year, mostly on apparel, entertainment, housing, and personal care. And they increased spending where they had to: in seven other categories totaling $340, topped by “cash contributions” such as alimony, “miscellaneous,” and healthcare.

This principle of cutting back where they can and spending more where they have to, in order to make their shrinking ends meet, has been dissected by Gallup, which found that consumers are “straining against rising prices on daily essentials” and are cutting back on things they want to buy [read… Gallup Slams Lid On Hopes For US Economy].

But not everyone has this problem. The top two quintiles raised their expenditures by $1,348 and $2,365 respectively. And that’s where the entire increase in consumer spending since 2008 has come from. But over the long run – and that’s now – the math just doesn’t work out.

This is the picture of that distortion, the one that is dragging down the American economy: 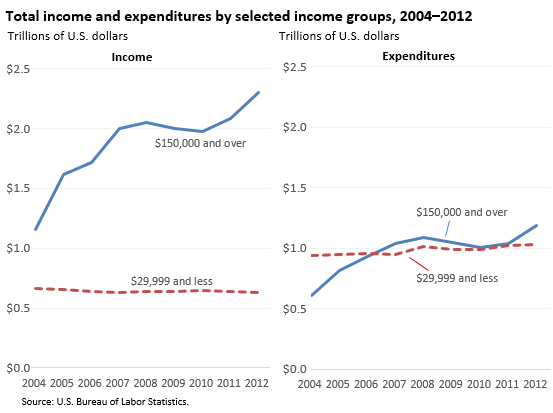 That was during the years when consumer spending actually increased. But for 2014, the jury is still out.

There’s no room for doubt, however. Not in the Wall Street hype machine. “We expect this slowdown to be short-lived and we look for consumer spending to rebound strongly in the coming months,” said Millan Mulraine, deputy chief economist at TD Securities.

And on the other hand, predictably: “It will provide Fed Chair Janet Yellen with some of the rationale she needs to justify why the Fed should move gradually and keep interest rates low for longer than hawks within the Fed would like,” said Diane Swonk, chief economist at Mesirow Financial.

You’d think the housing market is in fine shape, based on the sizzling optimism of our home builders. But now comes the bailed-out mortgage giant with a belated dose of reality. Read….. Fannie Mae Sledgehammers Housing Forecasts

ver the long run (which is now), the math of that distortion just doesn’t work out.