Why San Francisco Is Flipping For The Fed: 2013 Gains Averaged $194K/Flipped House

It still may be recalled that 2012-2013 was the time of the Fed’s housing liquidity flood—–when hedge funds and LBO shops swooped in to buy busted mortgages with cheap money from the Fed/Wall Street.  And once the party got started and prices in some formerly devasted markets like Phoenix, Los Vegas and much of California and Florida started soaring by 20-40% after March 2012, it appears that local flippers did not waste much time climbing aboard the fast train.

Redfin has some stunning figures out on profits during 2013 from house flipping in about 30 major markets. The short answer is that it beats working and makes a mockery of saving! In the combined markets, the average 2013 flip netted a gain of $90,000 or just shy of 2X the median household income.

But San Francisco turned out to be in a league of its own. There the average house flipper gained just under $200,000—which is to say, a better payday than the total annual earnings of 95% of households in America. And in these blessed precincts it seem that a Fed triple whammy was at work.

On top of the 2% Wall Street money and 3.3% home mortgage funding that drove real estate cap rates to rock bottom in September 2012, and therefore elevated valuation ratios to the nosebleed section of history, San Francisco benefited two more ways. First, from windfalls out of the screaming market for social media, biotech and cloud stocks; and then because the vast flow of winnings from that eruption unleashed a follow-on tsunami of venture capital pursing the next Facebook, Twitter or WhatsApp.

In effect, the massive eruption of housing purchasing power evident in San Francisco is in large part fueled by an inflow of capital from Wall Street, not the sustainable earnings of its employed population. Stated differently, tens of thousands in silicon valley are getting paid in options gains and venture  capital “burn rate” money, which is being channeled back into a roar housing casino.  There are exceedingly few cases were housing asset prices have ever been so utterly divorced from the recurring incomes of the resident population.

Nevertheless, San Francisco is just the outlier that illustrates the massive deformations caused by the Fed’s financial repression and wealth effects policies. One year flip gains of $150k, $125k and $100k in Boston, Los Angelo’s and Washington DC, respectively, are powerful evidence of the Fed’s folly.

And what was the underlying reason for absurdly cheap bond rates in the first place? Nothing more than the Keynesian constant. That is, the monetary politburo’s maneuvers to induce spending on existing housing and new construction by tricking people into chasing the same old get-rich-quick illusions that always lead to tears; and which most recently caused a lunatic 11-year housing price bubble through 2007 that nearly brought down the entire financial system just a few short years ago.

What’s wrong with low housing prices for long? Why not let housing prices be set by wage and salary earners out of their discretionary incomes, not flippers juiced-up on capital market windfalls?

We used to have something called free market capitalism. Now what we have is a central bank enabled casino, and it stretches coast-to-coast. 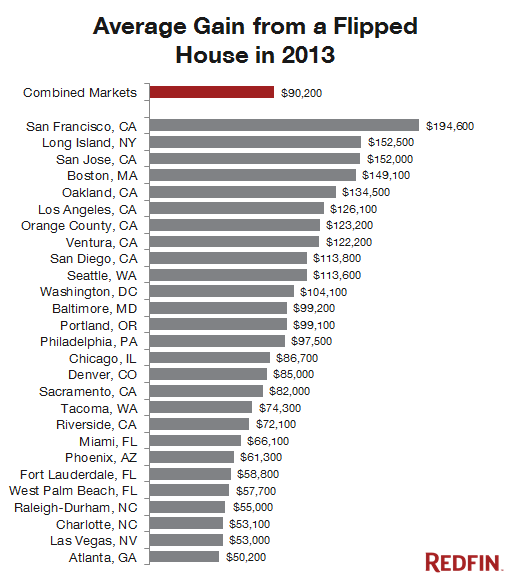