Now that the Powerball Jackpot has just hit a record $1.4 billion, people, mostly those in the lower and middle classes, are coming out in droves and buying lottery tickets with hopes of striking it rich.

After all, with $1.4 billion one can even afford enough shares of Apple stock to become a bigger holder than the Swiss National Bank (alterantively, one can buy a whole lot of VXX).

Naturally, we wish the lucky winner all the (non-diluted) best. There is, however, a small problem here when one steps back from the trees. As ConvergEx’ Nicholas Colas previously explained, “Lotteries essentially target and encourage lower-income individuals into a cycle that directly prevents them from improving their financial status and leverages their desire to escape poverty.  Yes, that’s a bit harsh, and yes, people have the right to make their own decisions.  Even bad ones…  Also, many people tend to significantly overestimate the odds of winning because we tend to assess the likelihood of an event occurring based on how frequently we hear about it happening.  The technical name for this is the Availability Heuristic, which means the more we hear about big winners in the press, the less uncommon a big payday begins to seem.” Call it that, or call it what one wishes, the end result is that the lottery is nothing but society’s perfectly efficient way of, to use a term from the vernacular, keeping the poor man down while dangling hopes and dreams of escaping into the world of the loathsome and oh so very detested “1% ers”. Alas, the probability of the latter happening to “you” is virtually non-existant.

Full explanation from Convergex’ Nick Colas on how and why Americans are lining up in lines around the block to… pay more taxes.

What Seems To Be Is Always Better than Nothing

Summary: American adults spent an average of $251 on lottery tickets.  With a return of 53 cents on the dollar, this means the average person threw away $118 on unsuccessful lotto tickets – not a great investment.  So why are we spending so much?  Well, lotteries are a fun, cheap opportunity to daydream about the possibility of becoming an overnight millionaire (or in this case billionaire), but on the flip side people tend to overestimate the odds of winning.  Lower-income demographics spend a much greater portion of their annual earnings on lottery tickets than do wealthier ones.

Since lotteries are state-run, that effectively means that the less affluent pay more in taxes (albeit by choice) than broadly appreciated.  And even winning the lottery doesn’t guarantee financial success.  More than 5% of lottery winners declare bankruptcy within 5 years of taking home the jackpot.  Despite their drawbacks, though, lotteries are no doubt here for the long haul – in states that have lotteries, an average of 11% of their total revenues come from lottery ticket sales, and the number is even as high as 36% in 2 states (West Virginia and Michigan).

I have never bought a lottery ticket and honestly don’t even know how.  And as far as I’m aware, I don’t know anyone who spends north of 200 bucks a year playing the lotto.  The only lottery my friends play is the NYC marathon lottery, where they’re gambling for maybe a 1 in 13 chance to fork over $255 for the privilege of slugging out 26 miles through the city’s streets.  Not quite hitting the jackpot in most people’s minds.

But someone, somewhere is buying all those tickets.  In Massachusetts, where the lottery is more popular than in any other state, people spend an average of $634 a year on Mega Millions, Powerball and the like.  Delaware comes in at number 2 with $504 spent per person, while Rhode Island ($469), West Virginia ($388) and New York ($357) round out the top 5.  North Dakota brings up the rear with per capita lottery spending of $34.  You can see the full list in the table following the text.

It’s difficult to pinpoint exactly who is investing so much money in a product that provides poor returns, but numerous studies show that lower-income people spend a much greater proportion of their earnings on lotteries than do wealthier people.  One figure suggests that households making less than $13,000 a year spend a full 9 percent of their income on lotteries.  This of course makes no sense – poor people should be the least willing to waste their hard-earned cash on games with such terrible odds of winning. (http://www.dailyfinance.com/2010/05/31/poor-people-spend-9-of-income-on-…).

Why bother?  Well, one answer is obvious enough and applies to just about everyone who plays.  For a buck (now $2 for Powerball) we have a cheap opportunity to daydream what could happen if we suddenly won millions of dollars.  But lotteries return 53 cents to the dollar.  So why are poor people irrationally buying tickets when the probability of winning is so slim?  One study by a team of Carnegie Mellon University behavioral economists (Haisley, Mostafa and Loewenstein) suggests it isn’t being poor but rather feeling poor that compels people to purchase lotto tickets.

By influencing participants’ perceptions of their relative wealth, the researchers found that people who felt poor bought almost two times as many lottery tickets as those who were made to feel more affluent.  Here’s how they did it:

Lotteries essentially target and encourage lower-income individuals into a cycle that directly prevents them from improving their financial status and leverages their desire to escape poverty.  Yes, that’s a bit harsh, and yes, people have the right to make their own decisions.  Even bad ones…  Also, many people tend to significantly overestimate the odds of winning because we tend to assess the likelihood of an event occurring based on how frequently we hear about it happening.  The technical name for this is the Availability Heuristic, which means the more we hear about big winners in the press, the less uncommon a big payday begins to seem.

Not that hitting the jackpot is guaranteed to substantially improve the winner’s life.  Economists at the University of Kentucky, University of Pittsburgh and Vanderbilt University collected data from 35,000 lottery winners of up to $150,000 in Florida’s Fantasy 5 lottery from 1993 to 2002.  Their findings are as follows:

Lottery players tend to have below-average incomes, so they are probably less accustomed to budgeting when they receive a windfall.  There’s also a psychological term called Mental Accounting that explains how people might treat their winnings less cautiously than money they’ve worked for.  Money has come into their possession through luck, which similar to bonus payments, often induces an urge to purchase unnecessary items.

But whether you think state lotteries are awful or great, there’s another word for them: essential.  In both West Virginia and Michigan, for example, lottery sales accounted for 36% of total state revenues in fiscal year 2010, and on average state with lotteries take in 11% of total revenues in the form of lotto ticket sales.  We’ve included the full list in a table following the text.  There are still 7 states that don’t have their own lottery systems, so the national average would be lower.

A couple of closing thoughts on what this all means: 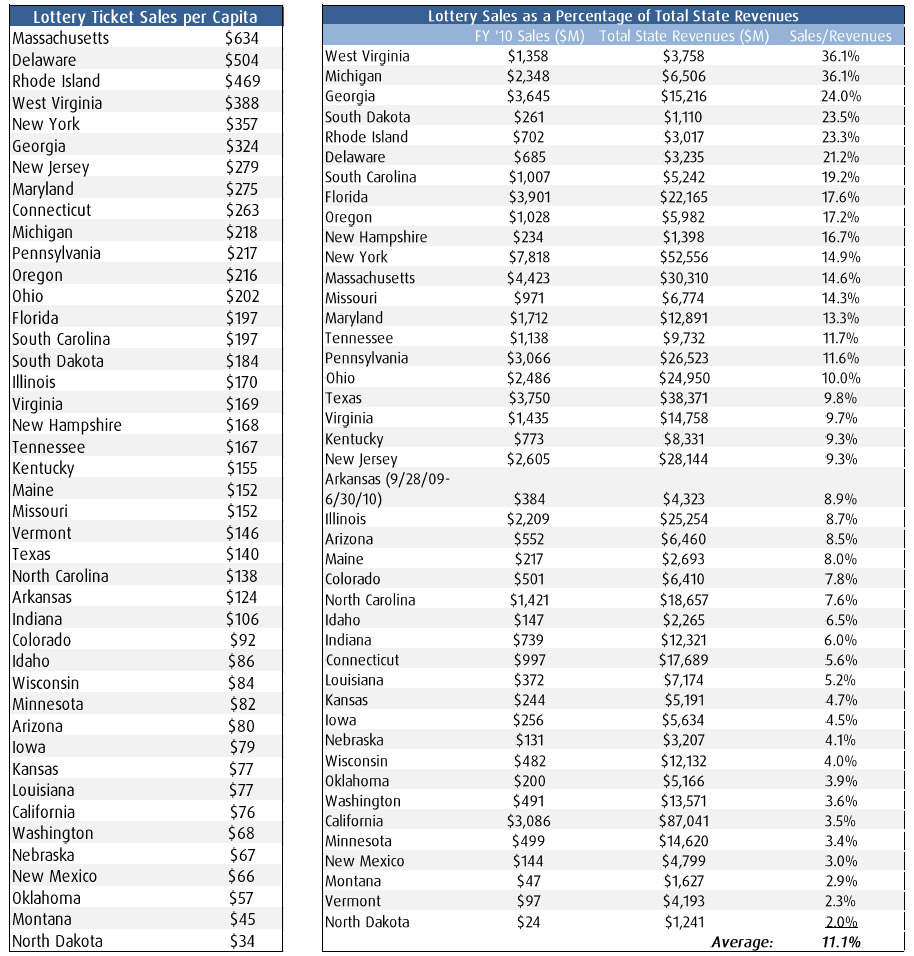 Source: Why The Powerball Jackpot Is Nothing But Another Tax on America’s Poor – ZeroHedge