Will the Bank of Japan cause a Global Bond Tantrum?

As investors anxiously await the key monetary policy decisions from the Federal Reserve and the Bank of Japan next week, there have been signs that the powerful rally in bond markets, unleashed last year by the threat of global deflation, may be starting to reverse. There has been talk of a major bond tantrum, similar to the one that followed Ben Bernanke’s tapering of bond purchases in 2013.

This time, however, the Fed seems unlikely to be at the centre of the tantrum. Even if the FOMC surprises the market by raising US interest rates by 25 basis points next week, this will probably be tempered by another reduction in its expected path for rates in the medium term.

Instead, the Bank of Japan has become the centre of global market attention. The results of its comprehensive review of monetary policy, to be announced next week, are shrouded in uncertainty. So far this year, both the content and the communication of the monetary announcements by BoJ governor Haruhiko Kuroda have been less than impressive, and the market’s response has been repeatedly in the opposite direction to that intended by the central bank.

As a result, the inflation credibility of the BoJ has sunk to a new low, and the policy board badly needs to restore confidence in the 2 per cent inflation target. But the board is reported to be split, and the direction of policy is unclear. With the JGB market now having a major impact on yields in the US, that could be the recipe for an accident in the global bond market.

The BoJ’s problems have stemmed largely from the botched decision to move interest rates into negative territory in January. After years of denying that this was possible, Mr Kuroda intended this to be another of his dovish surprises that had been effective in the past. But the market took a different view. Investors believed that the damaging impact of negative rates on bank profitability would more than offset the demand stimulus from negative rates, so inflation expectations refused to rise.

As the graph below shows, the inflation swaps market now shows consumer price index inflation expectations hovering at just above zero into the indefinite future. Mr Kuroda has argued for years that the central bank has the ability and the willingness to restore inflation to 2 per cent on a sustainable basis before the end of his term in 2018. The market no longer believes him: 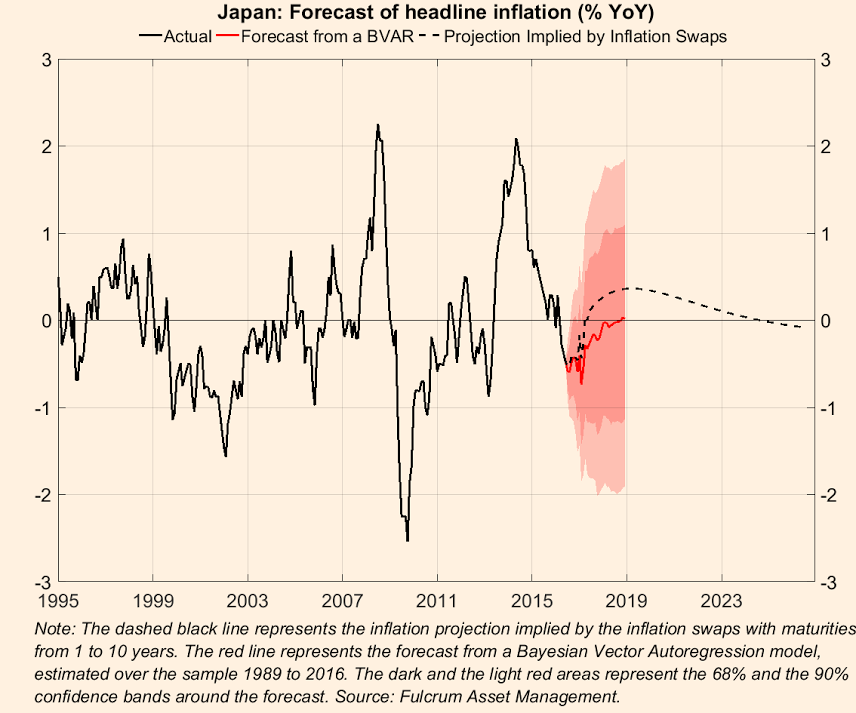 How will this lack of monetary credibility be addressed when the comprehensive review is published next week? The market has been suspicious about this review, thinking it may be a mechanism to introduce a slowing in bond purchases, and a clandestine tightening in monetary conditions.

Although the fears of a tightening are misplaced, there is a group on the board that wants to retreat from the open-ended promise to buy Y80tn of long bonds per annum. Previously, this promise has been at the centre of the BoJ’s blitzkrieg to achieve 2 per cent inflation at the maximum possible speed. Any tinkering with this formula could trigger a taper tantrum in the bond market, which the Kuroda camp is eager to avoid.

Given the major differences of view on the policy board, it is hard to read the runes ahead of next week’s meeting. But here are some informed guesses, based on recent speeches and off the record press guidance by the BoJ:

The BoJ is clearly in a fix. The danger of a short-term perverse response by the markets, as the central bank reorients its strategy away from open ended bond purchases, is not to be dismissed lightly. But a major taper tantrum in bond yields seems unlikely at a time when inflation expectations in Japan are so low.

In the longer term, a more serious attempt to focus on all three of Mr Abe’s arrows, not just on monetary stimulus, may eventually prove more successful than Mr Kuroda’s barrage of quantitative easing, which is now widely viewed in the markets as ineffective.

Source: Will the Bank of Japan cause a global bond tantrum?