Weaker demand from emerging markets made 2015 the worst year for world trade since the aftermath of the global financial crisis, highlighting rising fears about the health of the global economy.

The value of goods that crossed international borders last year fell 13.8 per cent in dollar terms — the first contraction since 2009 — according to the Netherlands Bureau of Economic Policy Analysis’s World Trade Monitor. Much of the slump was due to a slowdown in China and other emerging economies.

The new data released on Thursday represent the first snapshot of global trade for 2015. But the figures also come amid growing concerns that 2016 is already shaping up to be more fraught with dangers for the global economy than previously expected.

Those concerns are casting a shadow over a two-day meeting of G20 central bank governors and finance ministers due to start on Friday. Mark Carney, the Bank of England governor, was set to warn the gathering that the global economy risked “becoming trapped in a low growth, low inflation, low interest rate equilibrium”.

His comments will echo the International Monetary Fund, which this week warned it was poised to downgrade its forecast for global growth this year, saying the world’s leading economies needed to do more to boost growth.

The Baltic Dry index, a measure of global trade in bulk commodities, has been touching historic lows. China, which in 2014 overtook the US as the world’s biggest trading nation, this month reported double-digit falls in both exports and imports in January. In Brazil, which is now experiencing its worst recession in more than a century, imports from China have collapsed.

Exports from China to Brazil of everything from cars to textiles shipped in containers fell 60 per cent in January from a year earlier while the total volume of imports via containers into Latin America’s biggest economy halved, according to Maersk Line, the world’s largest shipping company.

“What we are seeing right now from China is not only a phenomenon for Brazil; we are seeing the same all over Latin America, declining [Chinese export] volumes into all the markets,” said Antonio Dominguez, managing director for Maersk Line in Brazil, Paraguay, Uruguay and Argentina. “It has been going on for several quarters but is getting more evident as we move into the year [2016].” 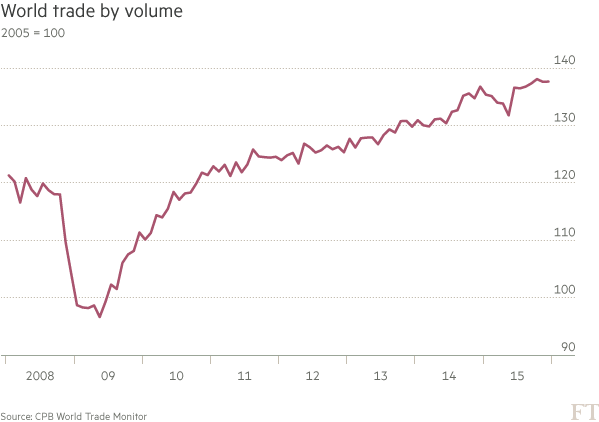 However, there are some signs a trade rebalancing is under way in places such as Brazil. The collapse in Brazilian imports from China has been accompanied by a rise in exports from Brazil to Asia, driven in part by a 40 per cent depreciation of the real against the dollar over the past 12 months.

“On a global level, most indicators suggest that trade growth will remain very weak,” said Andrew Kenningham, senior global economist for Capital Economics. “But we do not believe world trade is about to fall off a cliff.”

Largely because of currency swings and a collapse in the price of commodities the value of both exports and imports fell in every region of the world last year. 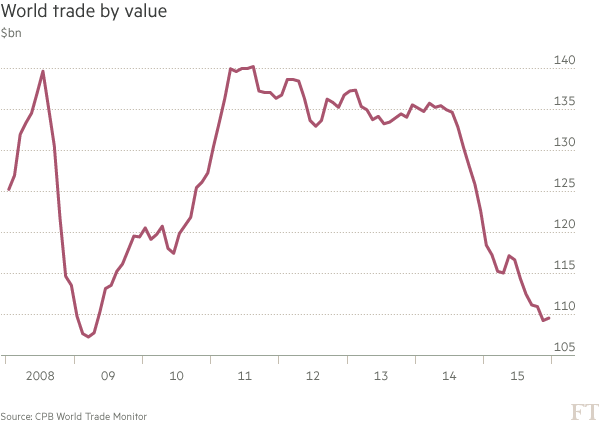 Measured in volume terms the picture was not as grim, with global trade growing 2.5 per cent. But that fell below global economic growth of 3.1 per cent, extending a depressing trend in the global economy.

Before the 2008 crisis global trade grew at as much as twice the rate of global output for decades. Since 2011, however, trade growth has slowed to be in line with — or even below — the broader growth of the global economy, prompting some to raise questions about whether the globalisation that has been such a dominant feature for decades has peaked.