The Fed thinks that keeping interest rates low spurs inflation. It was probably happy to see the purported uptick in wage inflation in the just released May jobs report. It wants to see wages start rising to create a bit of inflationary pressure.

That would be a real trick.

See, it doesn’t work that way. In fact, it’s just the opposite.

For the past 35 years, every time the Fed reversed monetary policy, wage rates immediately followed…in the same direction! When the Fed eased, the wage inflation rate fell. When the Fed tightened, wages rose faster. Not just a couple of times. Every single time!

If you want to know what’s killing workers wages in the US there it is. ZIRP.

If the Fed wants to get a little wage inflation, all it needs to do is start raising interest rates. 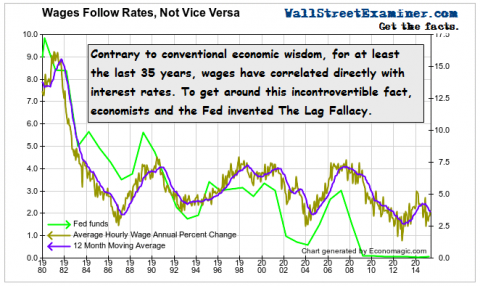 The above chart shows the annual rate of change in the average hourly wages of production and nonsupervisory employees, which comes from the BLS.

The same data reveals the second stupid trick. It’s not really a Fed trick, it’s a Wall Street economist, financial media trick. But trust me, the Fed will use it.

By now you’ve heard the G-R-R-REAT news that wage gains are heating up! Here’s how the Wall Street Journal put it a few minutes after the jobs report was released on Friday:

“At $24.96, average hourly earnings for private-sector workers were up 2.3% in May from a year earlier. That’s the biggest increase since the summer of 2013 a modest acceleration over the past four months and a little faster than the 2% average during the latest economic expansion.”

Just two problems. As usual, they were using data that doesn’t quite tell the whole story. That number was skewed by big raises for bosses. For everybody else… not so much. The average wage of production and non supervisory workers rose by 2.1% year over year.

And because they were using seasonally adjusted data, they got the odd impression that somehow wage gains are now faster than the were since 2013. Sorry, Charlie, that wasn’t the highest rate of gain since 2013. The current rate was actually higher than 2013, but it was below the rate of +2.45% in May of 2014. In fact it was below the annual rate of all but 2 months of 2014. The rate of wage gains has actually been downtrending since February 2014 when it hit +2.99%. There’s that technical analysis with actual, not seasonally adjusted data again. It works. Economists don’t use it though. They prefer to use statistical manipulation that obscures reality. 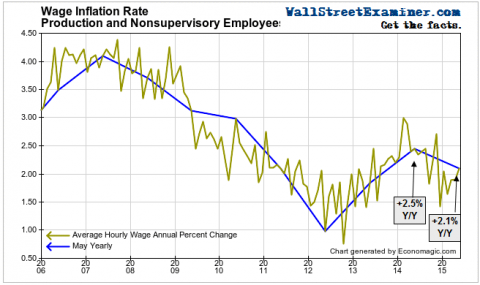 Outside of the second half of 2014 and early this year when the CPI briefly fell, I would argue that wage gains would not even be keeping up with the CPI if it were measured properly, which it isn’t. But instead of accepting reality, the Fed and the mainstream economic community will go off to their happy place, and claim that at long last, policy is working. The Fed will start raising rates, and wage inflation will follow.