Late last year the media was happily proclaiming that US worker earnings were increasing. I showed at the time that they were wrong. Eventually the truth comes around to bite these people in the butt, because the seasonally adjusted data can only stay wrong for so long. Eventually, usually too late to do any good, SA data must revert to reality. January was the month that it did in the average weekly and hourly earnings data. It’s a corollary to the premature and ultimately wrong Wall Street media claims that US household income was improving.

I like to use the weekly earnings data. Employers can raise hourly wages but hire more workers to cut down on hours worked per employee. The employee ends up with no more pay. What looks like growing worker earnings are actually sometimes an illusion fostered by the shell games employers play with wages and hours.

For example, while Wall Street and its media handmaidens were gloating, wrongly, that worker earnings were finally on the rise and outstripping inflation, behind the headline numbers, and under those shells, something else was going on. Average hours worked have been declining since the middle of 2015. 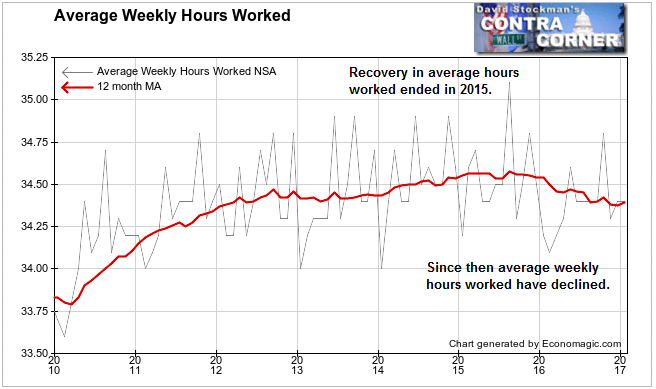 Now let’s look at average hourly earnings. Average hourly earnings of production and nonsupervisory workers got a big boost this year. That’s because workers at the lowest end of the totem poll got big raises as a result of statutory increases in the minimum wage in many states and and big cities.

Even with those statutory increases at the low end bringing up the average, wage gains for non-management workers  in 2016 through January 2017 never exceeded the peak growth rate seen in 2014. However,  the 12 month moving average of hourly wage increases has managed to edge above the 2014 high. That’s because the statutory increases in the minimum wages that became effective in 2016,  are sticky and not subject to reduction,  and they apply to millions of workers. Therefore,  the gains for blue collar, clerical, and retail workers have averaged just under 2.5% over the past 12 months. That’s a hair above the highest rate of gain in 2014. 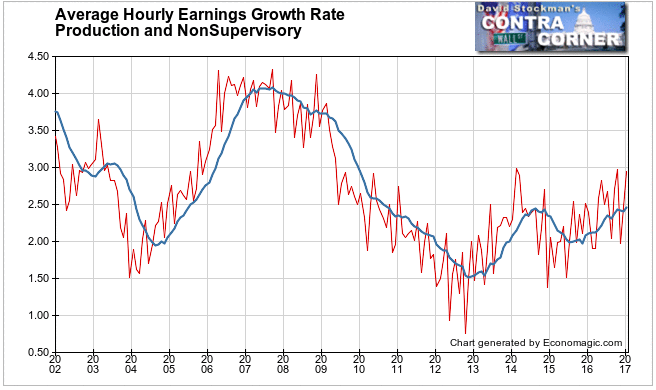 Let’s look at average weekly earnings of ALL workers. When counting high paid managers (some paid hundreds of times the lowest paid workers) in the mix, the low end statutory wage increases carry far less weight. You would therefore think that the extra weight from these high paid workers would skew the average weekly earnings upward in this “strong” of an economy. That gain in management pay should be enough to offset the small decline in average hours worked, right?

Wrong, in both cases. Neither the gains at the low end of the pay scale, nor the assumed gains at the high end show up in the average weekly earnings of all workers. 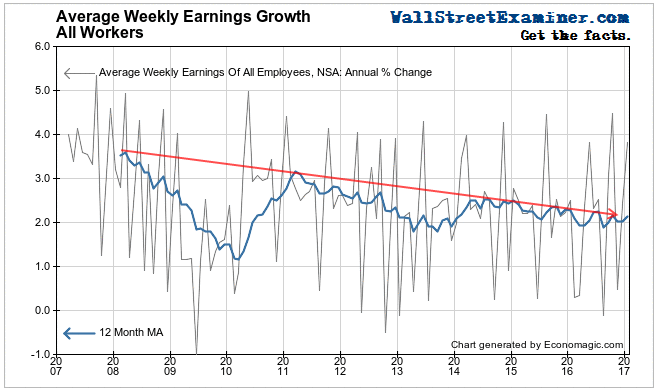 Average weekly earnings growth for all workers averaging 2.1% in the past 12 months. It has failed to recover to the peak level of 2014 which was around +2.5%. That was in turn below the 2011 recovery peak of +3.1%. And that in turn didn’t come close to reaching the growth rate of +3.6% hit in the first year this data was available for a full 12 months. That was 2008 in the first full year of the Great Recession.

By the way, that late downturn in wages illustrates another principle of the employment picture that I have talked about in the past. Employers are always the last to get the news.

So the data shows that it’s not just ordinary blue collar production and nonsupervisory workers seeing their wage growth slowing. It’s everybody. But if corporate CEO and C-suite salary growth isn’t slowing, and lower level wages are being pushed up by law, that means that everybody in the middle is getting the shaft.

Compared to CPI, Average Weekly Earnings has appeared to grow faster than inflation. But CPI understates actual inflation because it vastly under measures housing inflation. Instead of actual house price measures, the BLS substitutes a ginned up measure called Owners Equivalent Rent. From 2013 through 2016, this measure went up at less than half the rate of actual housing inflation. The result was that CPI understated actual inflation by a full 1% or more in 2013-2015 and by about 0.75% in the past year.

Perhaps nothing illustrates the plight of American workers, and by extension the US economy, than this. Nominal average weekly wages have gained a total of 7.3% since 2012. That’s bad enough for 4 years. But the truth is worse.  As deflated by the Flyover CPI, which is a more accurate measure of inflation than the BLS version of CPI, real wages have actually fallen by 3.1%. 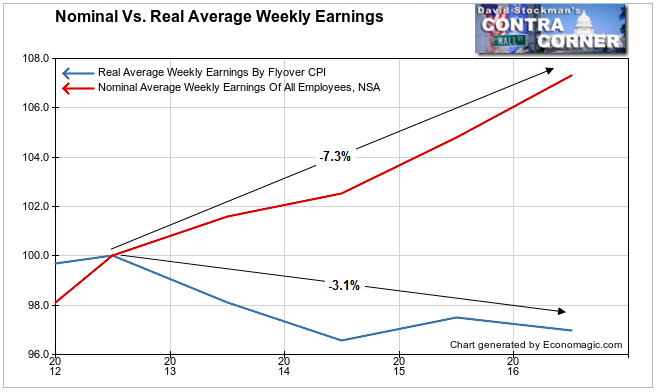 The purchasing power of American workers has actually been losing ground over the past 4 years. In a consumption driven economy, that’s very bad news indeed. Apparently, spending has once again been propped up by increasing debt, which has both driven and been supported by house price inflation. That process will end, probably soon, when mortgage rates resume their rise. US economic growth, such as it is, cannot be sustained if real incomes are falling.