Increasing IOER, the interest the Fed pays the banks for their $2.7 trillion in reserve deposits at the Fed, isn’t a tightening. That’s because raising IOER doesn’t raise the banks’ cost of funds. It lowers it. IOER is a de facto subsidy that the Fed pays the banks. Increasing it increases that cash subsidy to the banks. Where’s the incentive for the banks to raise rates, when they still hold trillions in excess cash? They now have lower costs of funds. Would it not stand to reason that they would compete more aggressively to make loans by keeping interest rates low?

Apparently not. The banks have been raising their rack rate, known as the prime rate, as the Fed increases the Fed Funds target. Instead of lending more, the banks seem content to lend less and simply increase their skim, aka net interest margin. That game can only last so long. If loan demand dries up at higher rates, lending will dry up, and the banks’ risk exposure will grow. In addition, if the banks really charge higher rates, then financial instrument carry trades would become less profitable to traders. Repo borrowing and loans on securities holdings would dry up.

I use the term “rack rate” because the banks are acting like they’re in the hotel business. They’re publishing one rate, the prime rate, while really still negotiating rates behind the scenes. It’s virtually impossible to know in real time what they’re doing unless you’re a bank insider or a big corporate customer with a direct pipeline to bank officers. The proof will be in the pudding. The quarterly data on bank net interest margin might give us a hint, but the impact probably won’t be seen until Q2 data comes out in mid August. That’s too slow.

The pudding in this case could be the amount of bank loans outstanding. The Fed publishes that data weekly. We already know that total lending has been on the wane for months. If that continues or accelerates, then we’ll know that banks are attempting to increase their skim and borrowers aren’t playing along. If that’s the case, the Fed’s rate increases will ultimately fail to stick in the market.

We see similar slowing in the area of financial speculation. The growth rate of these loans has actually turned negative year to year. The last sustained decline in the growth rate of this financial lending came in 2013. Dealers and others were  cutting their repo borrowing as they sold Treasuries, pushing yields up sharply over the course of that year. This could be the beginning of a similar event, only bigger. The decline in securities financing has started out more aggressively than in 2013. If this continues, bond yields will break out as inflation and bond yields take turns chasing and pushing each other higher.

These are just a few of the metrics I will be keeping an eye on as the Fed continues this experiment of mass hypnosis. So far that experiment appears to be working.

In fact, short term T-bill rates did move up in preparation for this rate hike. The Fed had essentially told the market, “Keep your eyes on the spiral. You are getting sleepy, very sleepy. Now you believe that interest rates are rising.” This was a done deal for the March FOMC meeting, with more to follow. Money traders came under the Fed’s spell, and T-bill rates rose from February 26 until a few hours before the Fed woke everybody up at 2 PM on March 16, when it announced the rate hike.

So, while the Fed did not tighten money one iota, rates moved up between February 26 and March 16 because of the power of suggestion. There has been no tightening because the Fed has not removed one dime of the massive excess cash it pumped into the banks over the course of QE. That pile of excess cash means that there are no restraints on loan growth other than borrowers desire to borrow. That’s where the Fed’s problem is. Loan demand is falling fast.

Short term rates on US Treasury bills began falling on March 16 a few hours before the Fed made its announcement. They settled at 68.5 basis points at the end of the day. That is below the Fed Funds target range of 0.75 to 1.0%. 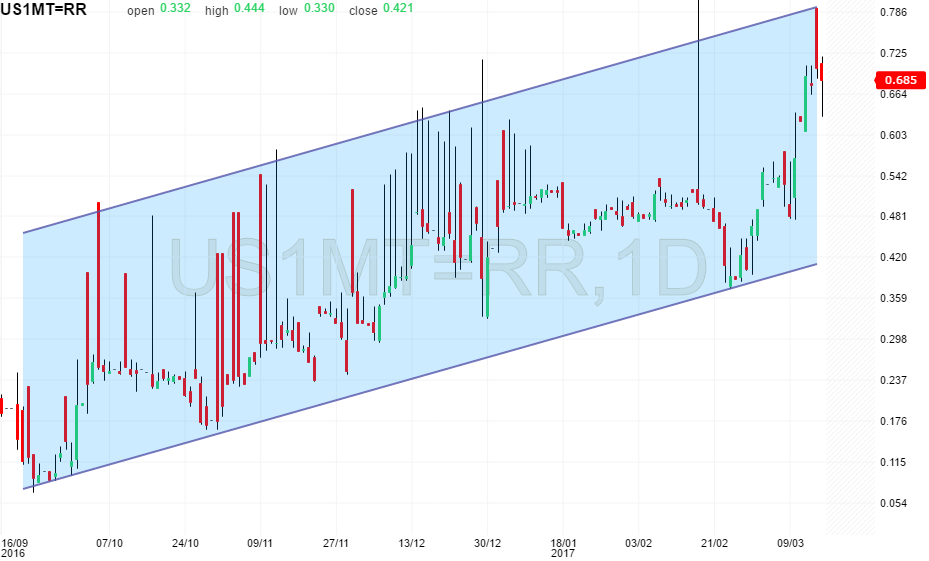 This inversion is probably due to the fact that money is really much looser than the Fed would have us believe. Dealers and banks are still piling into Treasuries in spite of T-bill rates that are too low. They simply don’t know what else to due with the ocean of cash they’re drowning in.

The Fed is the hypnotist and money market traders are the subjects of a great experiment in mass hypnosis. The traders believe that the Fed has tightened, so they act as if the market is in fact tighter.

But this illusion may not last. Borrowers aren’t borrowing at the banks’ higher rack rates, and money traders have not lowered their price bids on T-bills as much as they should have in view of the “rate increase.”  They have continued to bid aggressively for the paper pushing the interest rates on them down.

Furthermore, the Treasury is now forced to suspend borrowing until the debt ceiling is increased. There will be no new T-bills issued until the debt ceiling is raised. As the old bills expire, the holders of the paper will get their cash back.  With too much cash floating around and a sudden shortage of Treasury paper to absorb it, T bill rates should plummet. That could pull the entire rate spectrum down with it.

Then what will the Fed do? And how would the markets react to the reality that the Fed really doesn’t control interest rates at all. With trillions in excess cash lying around the Fed can only suggest. Whether money traders and bankers take them up on that, is a matter of how the market reacts to the reality of supply and demand. Illusions don’t last forever.

It’s too early to tell how this will play out and how the financial markets will respond. I suspect that this will end badly because it’s based on a fraud perpetrated by the Fed. So far, money market traders have bought in, but the pressures of reality will soon intrude on the fantasy. I will be watching the data closely for clues as to what comes next, and will keep you posted.