Last month the government reported a much ballyhooed gain in median household income (MHI) of 5.2% in 2015. We thoroughly debunked that idea. Last week the BEA released data on personal income. It is more evidence that the household income data was just wrong. At the risk of carrying coals to Newcastle, I will briefly cover the new information, and what it portends for economic growth.

All of this calculating leads us to my point, which is that this is another data set which contradicts the Census Bureau report of a 5.2% gain in median household income in 2015 that everybody got so excited about a few weeks back. 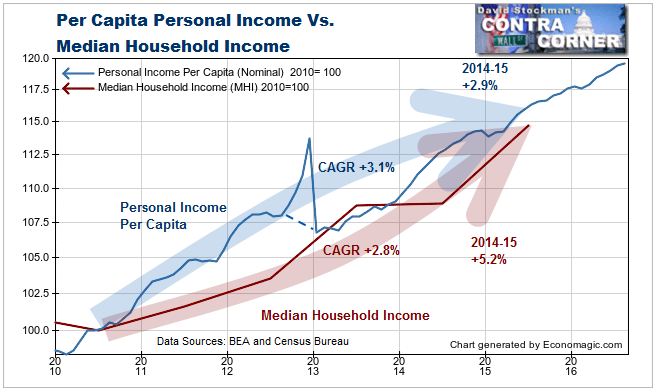 Both Median Household Income and Per Capita Personal Income began to recover from the Great Recession in 2010. From then until 2015, per capita PI grew at a compound annual rate of +3.1%. MHI grew at a rate of +2.8%. The difference is reasonable because MHI is a median and per capita PI is an average. The average is skewed by very high income earners whereas the median is not. Profits from capital gains in stocks and bonds typically push PI per capita up at a faster rate than MHI. 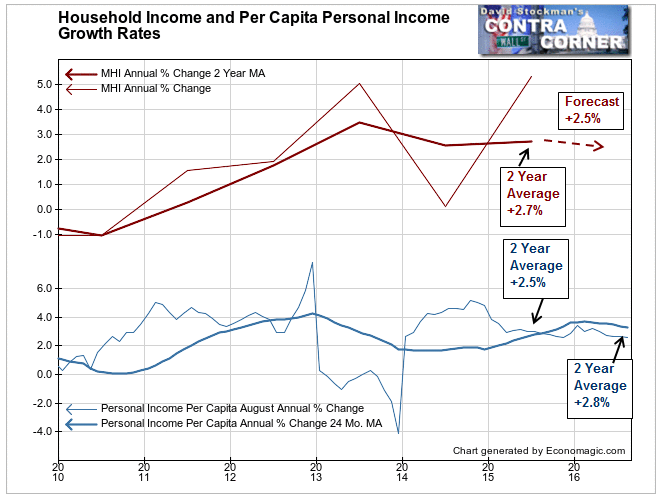 The annual rate of change gives us an idea what’s going on. It reflects the fact that the various government agencies that report economic data either do not have a good handle on the period to period changes, or if they do, they may intentionally manipulate the numbers to support a desired policy result.  If they make a “mistake” in one period, they may or may not make a complete adjustment of the earlier period in the process of revising old data. When those “mistakes” occur, especially in seasonally adjusting the numbers, it often takes years for the data to reflect reality. Therefore, more important than the short term headlines is the picture of the long term trend. That and comparing several data series is the only way to judge whether the current data makes any sense.

This year the 2 year average of PI per capita is +2.8%. That suggests that the 2 year average MHI should be around 2.5% for 2016. To get there, the year to year growth rate would again need to be zero. Don’t be surprised if that happens.

All of these numbers are nominal. They don’t take inflation into account. To derive a real, inflation adjusted number, the government deflates these numbers by the PCE deflator, which the BEA says is 1%. We know that figure is absurd. In contrast, Core CPI was +2.3% in August. That’s with the housing component suppressed with the use of the fictitious concept, Owner’s Equivalent Rent, to represent the housing component. With housing being 40% of Core CPI, and understated by roughly 2.5%, a more accurate measure of inflation would add about 1 point to the core measure, bringing it to around 3.3%.

The bottom line is that in real terms both PI per capita and MHI growth are no better than zero and may be as weak as -0.6%.  This is a bad omen for the consumption driven US economy.