Oh Yes, The Fed Is The Great Pretender

The interest rate on the 4 week T-bill now stands at 51 basis points as rates continue to edge higher after the mid December Fed rate hike. This rate broke out in November, reaching 40 basis points as of December 13. That was the day before the Fed increased the target on the Fed Funds rate on December 14 to 0.5 to 0.75%. 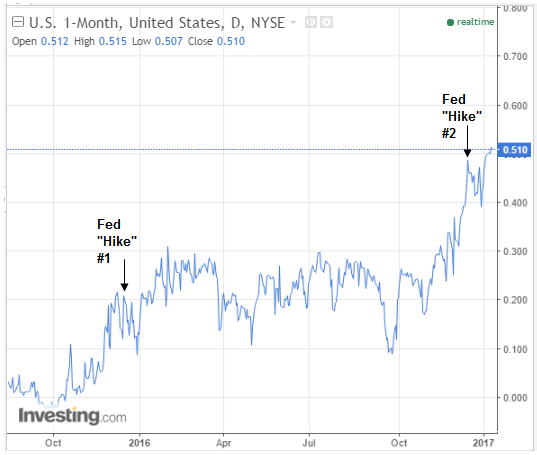 So the market had broken out even before the Fed “raised rates.” It was a decisive breakout of the yearlong range of 17-27 basis points. That range was below the old Fed Funds target rate of 25-50 basis points, which is for overnight money. Frequently that rate fell to zero, or even below zero for a few weeks.  The Fed did not appear to have control of rates even then.

Is this recent increase in money rates about the market anticipating higher rates, or the need of European banks to get their hands on cash by redeeming the short term US government paper that they hold.

I’m not into the “anticipation” thing, or the “pricing in” thing, or the market “discounting the future” thing. In 50 years of observing markets, I have invariably seen that there’s almost always readily identifiable macro liquidity increase or decrease behind the market move.  When it appears that the market is anticipating rising rates, it’s usually because liquidity has tightened somewhere in this interconnected world.

Tightening liquidity anywhere is tightening liquidity everywhere. The same banking behemoths operate in, and dominate all markets. When Deutsche Bank can’t raise enough cash in Europe to stay afloat, its tentacles reach out to the rest of the world, most importantly the US market. That’s where it can get the most cash fastest, by selling US Treasuries or redeeming its expiring T-bills, or outright borrowing in the money market. When it does that it adds supply to the market. DB is also no longer in the market as a buyer. When they add supply and abstain from bidding, it depresses prices. That is just another way of saying, raises yields and short term rates.

While there are correlations between rates and liquidity, we can’t directly prove that that’s the only driver for rising interest rates. Maybe the players are lowering their price bids in anticipation of higher rates, maybe not. It doesn’t really matter, because in this world where there’s too much dollar debt, and increasingly more than can be serviced adequately, this selling becomes self reinforcing. The more income paper banks and dealers and investors sell, the more rates rise. The more rates rise, the more the debt costs of those borrowers rises. That forces them into another round of liquidation to raise cash.

The problem is exacerbated when Euros depreciate against the dollar. The Europeans need to get their hands on even more dollars than they otherwise would.

Ironically, the Fed no longer actually controls rates. It could only do that when it deliberately kept reserves tight. Then it actually could manipulate money rates by adding or removing reserves from the system. Now, with trillions in excess cash floating around, the Fed doesn’t have the wherewithal to do that.

But the market still THINKS that it does. That can trigger stress in markets with too much debt that will need to be serviced at higher rates, which is to say, virtually everywhere. I focus on Europe because that’s where the problems are most measurable, and transparent enough to follow.

But if debtors anywhere merely suspect that rates are going higher, some of them will start looking for ways to pay off that debt. When borrowers use cash, or especially if they sell assets, to pay down debt, the cash is extinguished. It doesn’t go to another market or another instrument. It goes to pay off that debt. Both the debt, which is the borrower’s liability, and the cash, which is that entity’s asset, simply no longer exist. Money, i.e. liquidity, is effectively destroyed. There’s less cash in the system.

Multiply that many times in large transactions, and pretty soon you’re talking real money. That disappearing money tightens liquidity all over the world. Thus starts a vicious cycle.

So maybe the Fed’s signals that it wanted to rates to rise were enough to get the ball rolling on the upside. We saw that back in October 2015, two months BEFORE the Fed raised the Fed Funds target. It then happened again before the second rate hike. Rates started rising in October. The broke out in November, and they’re still rising.

So did the Fed raise rates on December 14? Or did it merely ratify what had already taken place in the marketplace? Probably the latter, but the two actions are now in the position of reinforcing each other. This is compounded by the fact that there are so many basketcases in Europe in dire need of cash, that we’re actually starting to see an increase in bank to bank payday loans, the market formerly known as Fed Funds.

From 2008 to 2015 the size of the Fed Funds market fell by 85% from nearly $400 billion outstanding to around $50 billion by late 2015 . And that’s where it has stayed ever since. There are 6,800 federally insured commercial banks in the US. So that works out to an average of $7.4 million–that’s million, not billion– in Fed Funds traded nightly per bank. That’s hardly a market considering that there are $12.5 trillion in assets in the US banking system. That’s an average of $1.8 billion in assets per bank. Fed Funds outstanding totals just 4 tenths of a percent of total bank assets. 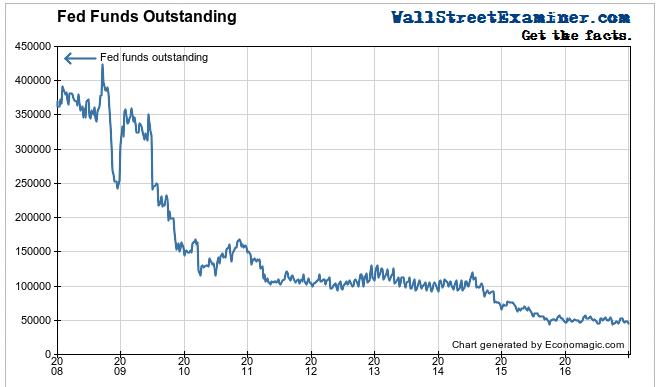 I mean, think about it. If you and your friends had $20 million in excess cash lying around, would you need to hit one of your buds up for a small time loan?  No. But if one of them went to Vegas, lost all his money, and needed to borrow a few hundred from you for a new suit you might lend it to him if you thought he’d land a job. But you’re no stooge. Since there’s some risk attached to this loan you tell your friend that will you would have lent him the money last week for 5%, now you want 15%, friends being friends and all. But he’s a friend you really don’t trust or like very much. So you stick it to him.

The banks are like that. Only the rates are lower and the names haven’t been changed to protect the innocent. Do you hear me Deutsche Bank? There are other European bank basket cases, too numerous to mention, all of which have New York branches. They are therefore members of the NY Fed District Bank, and are players in the US Fed Funds markets. A few of them went to Vegas and lost.

I think that rather than 6,800 US banks in the Fed Funds market with an average of $7.4 million outstanding there are probably a dozen or so European banks in the US system borrowing $5-10 billion in Fed Funds every night. Or maybe two, with $25 billion apiece. These are the payday loan borrowers, who need to borrow a buck just to buy a new suit, or to take their new prospective investors out to lunch.  They have now driven Fed Funds up to 67 basis points. That’s where the Fed Funds rate tends to end up. Every day. 67 basis points. Yeah, there’s a real market for ya.

The NY Fed is showing that since November its average daily trading volume in Fed Funds has ratcheted up by 12-13%.  We haven’t seen it yet in the overnight total bank to bank Fed Funds outstandings data published by the Fed Board of Governors yet. I can’t imagine why there would be a discrepancy. But if demand for Fed Funds really is rising at the same time as interest rates are rising, that suggests that money market stresses are increasing. Rates will continue to rise, and the Fed will pretend to lead the market. But in reality, the Fed is just tagging along for the ride, pretending to be in control when it’s not.