Real Wage Gains? Just Another False Narrative For The Fed To Act Out Its Fantasies

The Wall Street Journal made a big deal last Friday that wages are growing.

…workers are seeing long-awaited wage gains, signs that seven years into a slow-growing expansion the labor market is improving enough to reap some benefit for American households…

As unemployment drops, soaking up the pool of potential workers, some of the headwinds to wage growth might be receding, though longer-run challenges persist.”

Then the paper quotes Yellin.

Fed Chairwoman Janet Yellen told an audience in Baltimore last month. “…it also looks like the economic gains of the past few years are finally raising living standards for most people.”

All of this implies that lately wages have been rising faster than workers’ cost of living. WSJ opines that this underpins the Fed’s case for further interest rate rises.  But let’s look at the facts.

First, the Journal wrote that average hourly earnings increased 2.9% year to year. This is simply untrue. They are able to extract a number like that by comparing December 2016 to December 2015 using seasonally adjusted (SA) data. That’s not kosher. A year to year SA comparison cumulates the error in each monthly statistical manipulation.  You can’t get to a 2.9% increase using the actual unadjusted data. The actual, not seasonally adjusted (NSA) average hourly earnings for production and non-supervisory rose by 2.5% year over year. This category includes the bulk of workers, but not bosses, and sales execs who tend to be paid multiples of ordinary workers.

Average hourly earnings for all workers, which includes the super high earning supervisory and sales people, is about 19% higher. Lo and behold, it only showed a year to year gain of 1.6%. Looks like the guys at the top took a bit of haircut in December. In truth, on a month to month basis these numbers can have spikes and daggers, but the trend tends to be stable over time.

Does it suggest that there’s some kind of improvement going on? Let’s look at the big picture. We’ll first consider nominal wages and salaries only. We’ll take a longer perspective to see just how meaningful current changes are. 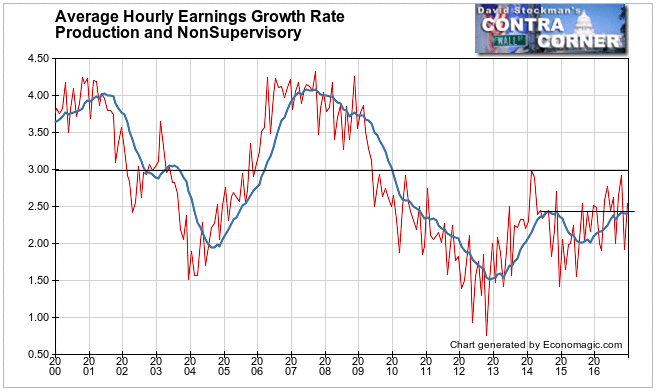 Prior to the 2 recessions of the last decade workers often saw wages increase by more than 3% in a year. No more. Since 2009, wages and salaries of production and nonsupervisory workers have NEVER increased by as much as 3%.  Since 2013, wage gains over the course of any 12 month period have never exceeded an average of 2.4%.

I always come back to looking at these charts not as an economist, which I’m not, but as a technical analyst, which I am. I see here that contrary to what the mainstream narrative implies, there’s nothing new in recent data. There were wage gains at this level in 2014. The 12 month average at that time topped out at approximately 2.4%. Here we are again.

Technicians call this a double top. If we break out here then yes, we’re probably in a new trend of rising wages. But if wage growth slows again from here, then absolutely nothing has changed in the past 7 years. Wage increases might be larger than they were in 2012, but that’s not saying much.

The second part of the mainstream narrative, and the one they are emphasizing, is that REAL wages are finally rising. That actually has almost never been true historically, and it isn’t true now. They can only say that because they don’t actually measure inflation. CPI understates actual cost of living expenses, and the Fed’s favorite measure, the PCE, understates it even more. If you’ve been around for awhile, you’re familiar with this. And even if you’re not, you probably know it intuitively from your own experience. If you are a newer reader, here’s my most recent piece on this.

So, yes, if you adjust nominal wages by CPI, it will look as though workers have been experiencing real wage gains. A big chunk of that would have been in 2014 when gas prices at the pump collapsed. Nominal wage growth has been not materially different before or after, but workers got a boost in real income because one of their big cost components did the economic equivalent of the Acapulco cliff dive. 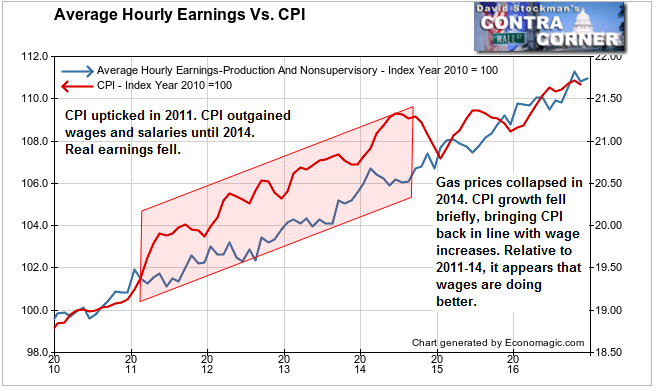 While wages have been increasing at a fairly constant rate, give or take a percent, CPI has been volatile. That has created a kind of economic optical illusion. This illusion allows economists and Fed chairpersons to opine that workers are somehow seeing real wage gains now that they weren’t before.  It’s utter nonsense.

And that’s using an inflation measure, CPI, that doesn’t really measure inflation at all. If real wage gains were keeping pace with “inflation” then the typical worker would be able to buy or rent the same kind of housing today as he did in 2011, with the same proportion of his income. Unfortunately for those workers, the average $200,000 home from 2011 now costs $260,000.  The typical $1200 per month apartment in 2011 now costs $1500.  But workers wages haven’t risen by 25% or 30% as housing costs have. They have risen by 12% or so over that time. Workers real incomes are still falling if you measure inflation properly.

David Stockman has created a measure of inflation which properly includes actual nationwide median housing and rent increases. It also gives slightly more weight to energy and health care costs than CPI does. But the big difference is in the accurate accounting for housing. CPI suppresses that with the use of the ginned up, phony measure called Owner’s Equivalent Rent, which has shaved about 1% per year off CPI since 2012.

The Flyover CPI is a more accurate measure of the inflation actually experienced by typical workers over time. Using it we see a different picture. Worker wages typically track inflation very closely. It falls behind slightly for a few years in then catches up and gets ahead a little. Over time, there has been no persistent gain in real worker wages. And certainly not in the past couple of years. 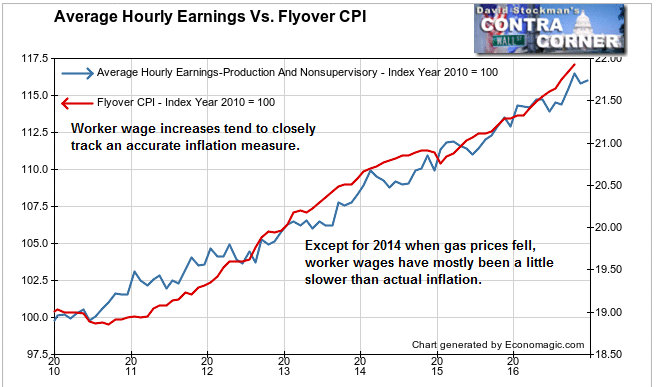 In fact, over the very long haul, wage gains and inflation tend to mirror each other. The primary exception was during the housing bubble when worker wages could not keep pace. But the collapse of 2008-2011 brought the 2 measures back into line. And why shouldn’t wage gains track inflation. They’re just another manifestation of it.  Never in recent economic history have wages ever persistently outpaced inflation. They are two sides of the same coin. Workers are not better off now than 3 years ago or 30 years ago.  It’s arguable that they might be worse off because a far smaller proportion of the population is able to find work today. But those who are working are certainly no better off.

To illustrate I’ll leave you with this. The most common job in America is truck driver. If things were better for most workers, this should be a leading candidate to illustrate. Trucking, after all, is involved in every aspect of the US consumer economy.  It’s a job that most people can do, but does require some training. 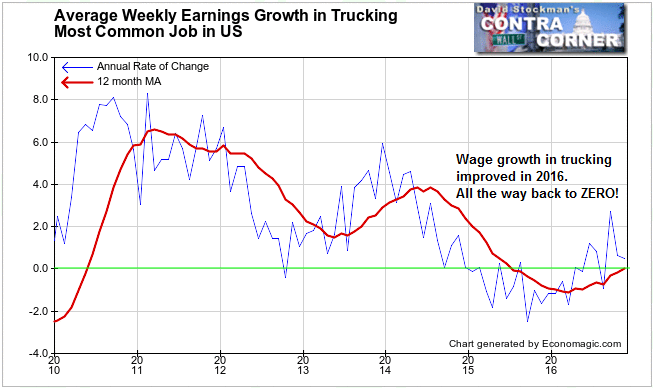 The idea that real wages are gaining is one of the many false narratives used to justify the bull case for stocks. Not only is it irrelevant, it’s wrong. It can’t be used to justify anything positive about the US economy.  But the Wall Street Journal claims that the Fed will use real wage gains as a reason to support more interest rate “increases.”  They’re probably right. The Fed believes and acts out on a lot of fantasies. This is just another one.