The Multifamily Housing Dirge- Pray For The Dead

Yesterday we saw that the total housing starts really were as bad as the headlines said, and worse than the excuses that the media made for that.

However, the totals include two different businesses with different drivers. Single family starts reflect purchases and custom builds, in other words, major long term financial commitments by families and households.

Multi family starts involve mostly the construction of rental units. Renters are typically people who cannot afford to buy, or secondarily who do not want to make a long term commitment to a specific home.  They haven’t been sold on the American dream of being a mortgage slave.

Developers are building these units for investors not homebuyers, and certainly not for the users of the product. Buyers of these properties are driven by current yield, and income growth potential, not whether they would want to live in the property.

When total housing starts are weak we need to examine whether that was due to weakness in one or both of the component businesses. That can give us information about what to expect both in terms of the future of housing and housing related stocks. It can possibly also give us some insight into the performance of the US economy and financial markets at large.

Multifamily starts collapsed in November. They fell by 47% from October. While month to month changes are volatile in this market, November’s performance was far worse than normal.  In fact, this was by far the worst November in at least the last 10 years. The next worse performance was in November 2008, in the teeth of the housing crash.

This decline left multifamily starts 33% below the November 2015 level. Furthermore, in no month of 2016 were starts greater than in any month of 2015.  That was the first time this occurred since the multifamily recovery began in 2010, about a year before the single family market bottomed.

November multifamily starts were at their lowest since 2012. January or February is typically the weakest month each year. With financing getting more expensive, it’s likely that the January or February 2017 performance will break the 2015 low. The current November number is already below the low set in January of this year.

The 12 month moving average of monthly starts smooths and lags the trend of actual changes. It turned up in 2010, leading the housing recovery. That moving average has  now turned down for the first time. It suggests that the party is over. 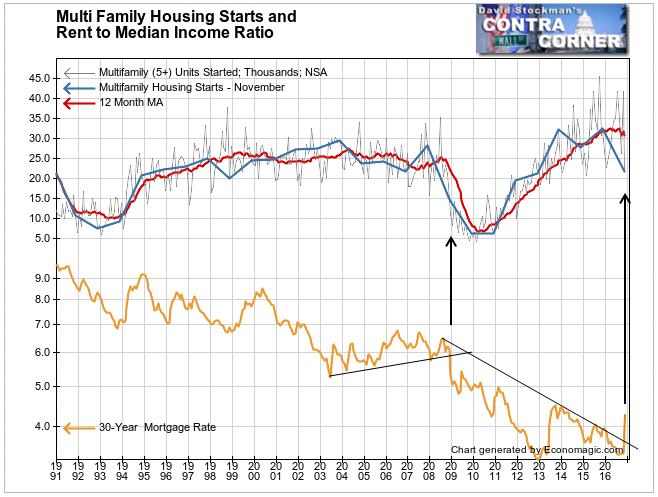 Last month mortgage rates broke an 8 year downtrend. The current rate on the 30 year fixed mortgage for single family purchases is now 4.18% up from the 3.5% area, which persisted for several months in the third quarter and October.

Multi-family starts boomed in 2013-2015 as developers rushed to take advantage of low rates. The chart shows what appears to be a major cyclical reversal and possibly the beginning of a secular trend reversal.

We should note that multifamily mortgage rates are about 100 basis points higher. 5.1% is far faster than rent inflation, and higher than capitalization rates on investment grade multifamily properties. JLL, formerly Jones Lang LaSalle, reports that the average cap rate on multifamily property was 4.4%.

I have seen many properties in the most desirable metros listed on commercial property sites like Loopnet for cap rates as low as 1-1.5%. That’s just insane.   No wonder developers have coughed up the bit! Once the financing cost exceeds the cap rate, that’s it. Game over.  No right minded investor, or lender, would buy or finance a project under these conditions.

You can find more on this in my posts earlier this month on financial market liquidity. The banking crisis in Europe is causing liquidity to tighten everywhere. This is a problem that won’t have a short term solution.

There’s another problem in the multifamily market that is structural. Household incomes are not rising fast enough to keep pace with rent increases. Last year, the ratio of rent to national median household income hit its highest level since the Census Bureau first collected national asking rents in 1988. 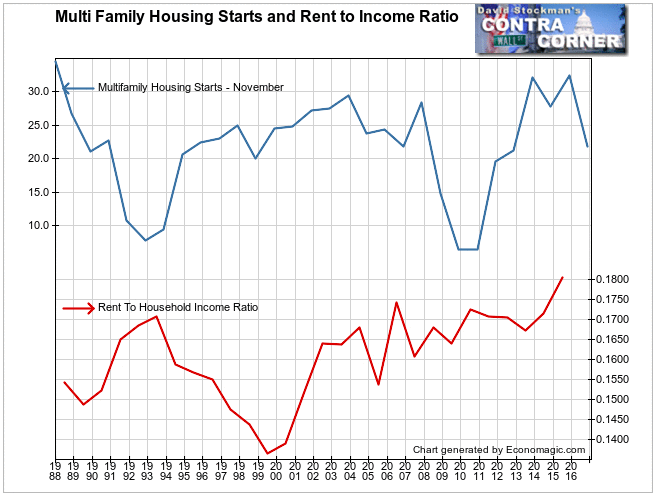 US median household income includes both renters and homebuyers, whose incomes are typically higher than renters. The actual ratio of rents to the income of renters is likely to be significantly higher than shown on the graph. But the principal is the same. The rent to income ratio for renters has gone through the roof. Renters have been squeezed as far as they can be. Builders stopped building not just because cap rates are too low and mortgage rates are too high, but also because no one can afford to rent new apartments any more. Occupancy rates are falling.

More renters are doubling up or moving back with the family as a result, so the demand for new units falls. That puts downward pressure on rent increases. Apartmentlist.com reports that national median rents actually declined slightly in November, with rents falling in 55 out of 100 cities.

Axiometrics, an apartment market data provider for developers and investors, reported that rent growth in November was at its lowest year to year rate since 2010, which was the bottom of the crash.  Overall average annual rent inflation fell to 2.4% from 4.9% in November 2015. Rents fell by 0.2% from October to November.

Annual rent growth in Class A properties rose from 1.6% in September to 1.9% in November.  In mid 2015 the rental inflation rate in these top investment quality properties was rising at a 4% clip.  “The seven [major] metros recording negative rent growth in November included Houston, San Francisco, San Jose, Oakland and New York, all of which are among the largest apartment markets in the nation,” Axiometric reported.

Axiometrics also reported that occupancy rates are falling. “The national occupancy rate fell 20 bps to 94.6% in November, the lowest since March 2014.”  November’s occupancy was lower than both November 2014 and 2015.

So we have both lower rents and lower occupancy. This is coming in spite of a supposedly strong recovery in jobs and wages.  But the multifamily housing market says otherwise. There aren’t enough good  jobs for people to afford to pay the rent. The rent is too damn high and the pay is too damn low.

It’s a bad sign for the single family market, which will almost certainly follow as interest rates rise and buyers are priced out of the market.

It’s an especially bad sign for apartment REITS. Make that doubly so, with competing yields on the rise. The red flags are flying. The REIT bubble is finished. It’s time to vacate REIT investments.  If you bought those REITS right, be the vulture. Take the money and count it while you wait for the next great buying opportunity.

Hopefully in our lifetimes.