These Ten Charts Will Show You The Jobs, But Not The Money

Back on November 18 the Washington Post featured a piece by Jim Tankersley that headlined:

Trump can’t revive industry. But his voters might still get raises

Wage stagnation in the Rust Belt likely won’t endure through his presidency.

The predicate of the piece was this:

If Trump can simply find a way to keep the economy growing even modestly for several years, and if the unemployment rate remains low, he has a good chance of presiding over a period of sustained wage growth similar to what America saw in the mid- to late 1990s, when Bill Clinton was president. Those gains will lift all workers, from elite engineers in Silicon Valley to janitors in Maine, if history is a guide. They might not bring back many factory or mining jobs, but they will boost the paychecks of the men and women who lost production jobs years ago and remain angry about it today.

Best of all for Trump, those gains have already begun. For all Trump’s railing against the “terrible” economy under President Obama, census data released in September shows that typical workers at every level, from the very poor to the very rich, experienced income growth in 2015. More in-depth analyses that track individual workers over time, such as one conducted by former Clinton economist Robert Shapiro, suggest that Americans without college degrees started to see rising incomes as far back as 2013.

That got me to thinking. If this is true, and wages are already growing for most Americans, including particularly those without college degrees, then it must really be showing up in the fastest growing industries. After all wouldn’t wages be rising fastest in the fields with the greatest demand for workers. And surely blue collar manufacturing workers might even be qualified to snag some of those rising wage jobs in the fastest growing fields.

To that end I sorted BLS industry data by those with the fastest to the slowest growth rates since the bottom of the recession in 2009. I arbitrarily selected the top 10. Then I created charts for each showing the growth of total employment in the field, and the growth of real wages. I mean, if wages aren’t beating the CPI, then they’re not rising, are they? To say nothing of the fact that on average CPI understates the real cost of living increase by an average of approximately 0.75% per year.

But we’ll stick with the government’s official tally of real wages. Finally I indicate on the chart the current actual average wage, just to be able to see if the industry pays a decent enough wage to support a family in the fashion that our parents were accustomed to.

Here then are those 10 charts, shown in order of those that had the fastest growth from 2009-2016. However, I have only indicated the growth rate over the last 3 years since the economic “recovery” has been more or less stable. Prior to that, there was a bungee effect off the 2009 low that skews the growth upward. In reality it was just a matter of the initial rebound attempting to return to past levels. The question today, is “What have you done for me lately?”

1) Internet  Publishing, Broadcasting, Web Portals! The very industry we are currently partaking of. In fact I’ve been a member of this esteemed industry since I started publishing the Wall Street Examiner (under the name Capitalstoo.com) in October 2000. That was before anyone even conceived of it having its own BLS category and NAICS industrial code. It’s nice to be a trendsetter. Not so much however, when you realize that real wages have dropped by about 20% since 2012. 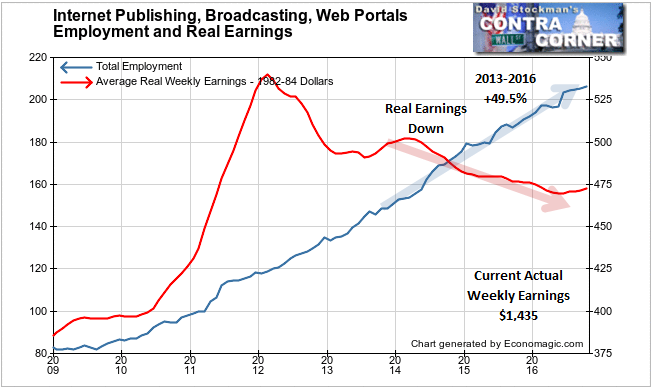 For the rest of these I’ll let the pictures do the talking.

2) Electronic Shopping- Note that both wages and employment growth have begun to slow. Is that the song of the canary I hear? 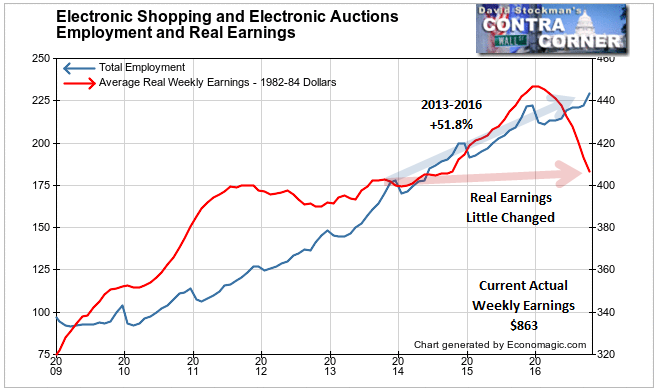 3) Nail Salons- Now there’s a field for unemployed factory workers! All those unemployed folks in the rust belt have nothing better to do than get their nails done. Note too the actual average weekly earnings of $380. That will go a long way to feed and house a family of 4. 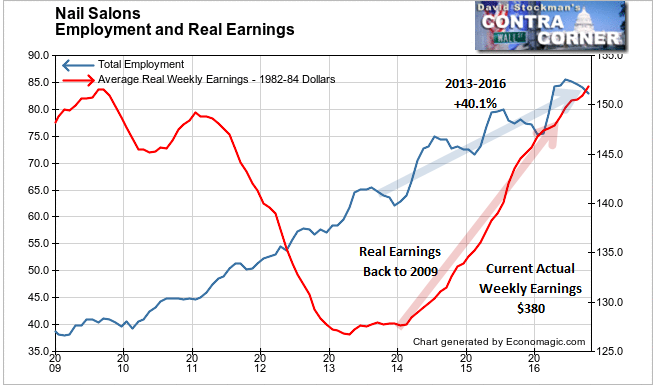 4) Other Information Services Most of this category is comprised of category 1. Again, not a field likely to employ too many unemployed factory workers. That little hook at the top of the total employment line might be another canary in the coal mine. 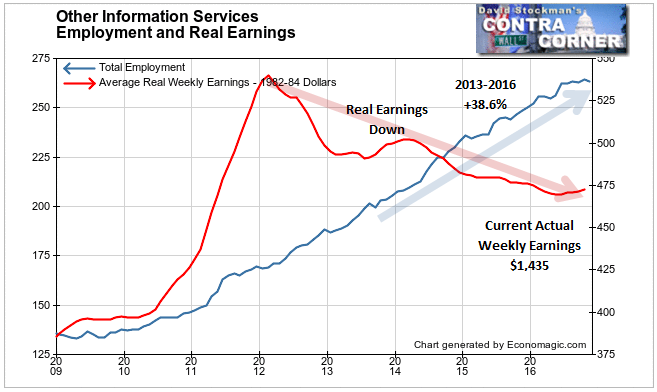 5) Skiing Facilities There’s a real stable, high paying job. Please excuse my sarcasm.  I just keep thinking about all those high paying jobs for unemployed blue collar workers that Tankersley is talking about. 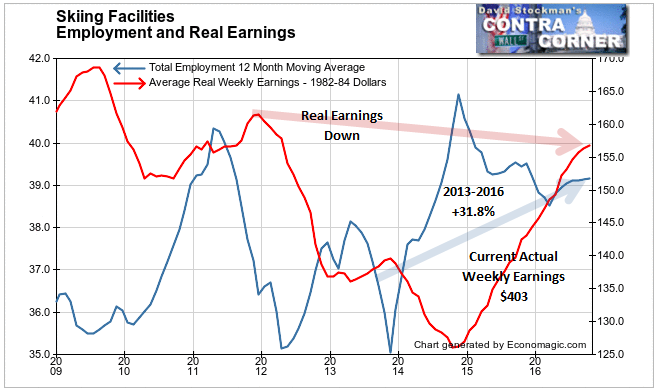 6) HMO Medical Centers Yep, there’s another one of those sectors with lots of jobs with low skill requirements that can be filled by blue collar workers as the recovery heads into that boom that Obama and the Chicago Mob is leaving behind for Donald Demento. And there’s that trend of rising wages that Tankersly is talking about. Oh, wait. I must be thinking of something else. 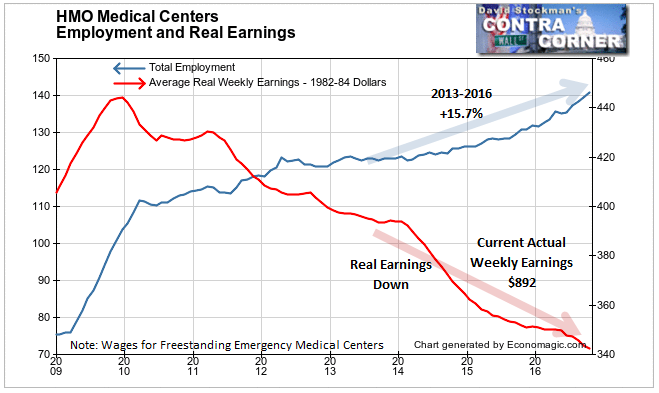 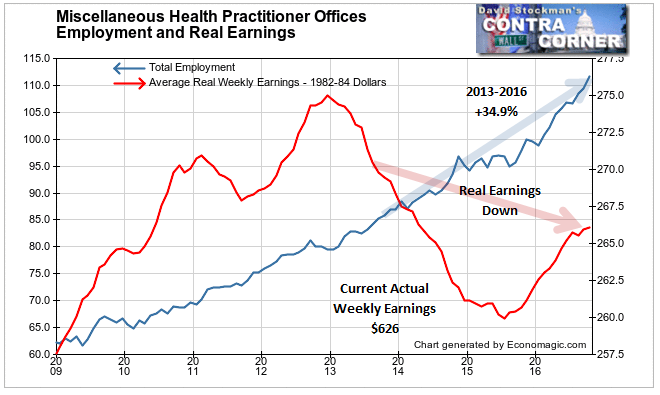 Let’s see how these two employment employment growth lines do when the medical insurance industry collapses. It’s coming. Nobody can afford to pay the executive skim any more.  You’ve heard of the fast growing “gig economy.” That’s where workers work “gigs,” short term jobs as independent contractors. Employers love gig workers because they can rid themselves of the requirement to pay for health insurance.  And most gig workers can’t afford it.

8) Breweries, Wineries, and Distilleries – Need a job? Get thee to a winery! Yet, again real wages are in a downtrend.  Too many applicants tend to do that. With only 140,000 jobs in these industries and plenty of people wanting to do this work, I’d expect the downward pressure on wages to be a trend. 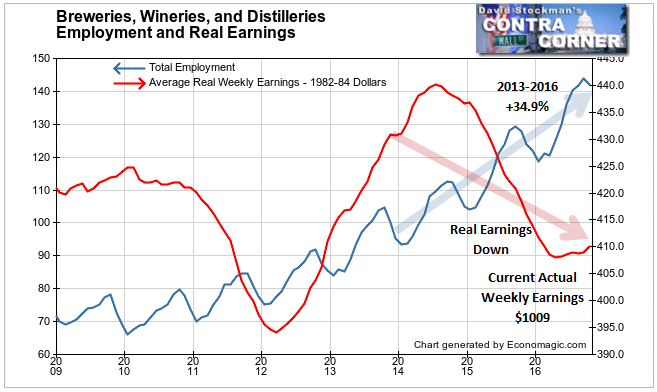 9) Automobiles and Light Trucks – Most of this is in the Utility Vehicle and Light Truck subsector. Thanks to the cheap energy prices since 2014, demand for these vehicles have soared. So has demand for workers. Their pay is good. But there are only 180,000 jobs for building SUVs and pickups. There are 5 million unemployed factory workers. 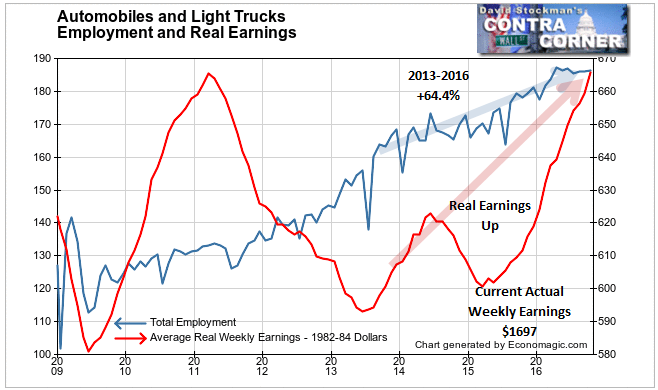 10) Miscellaneous Professional and Technical services- Here’s another growing field that has seen some recent wage growth, but only back to 2014 levels. There’s some potential to employ factory workers, but not enough jobs to make a difference. 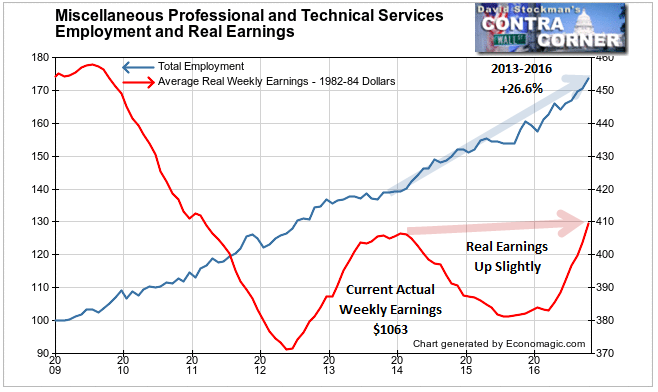 Ultimately, a bull market in stocks that is based on money printing and rank speculation isn’t going to provide jobs, or health care, or enough income to feed the masses. There’s no trickle down, just more and more people working performing low paid services for the plutocrats and their cronies.

You can hang on for the ride, but at the same time, you must be ever vigilant for signs that the end is near. We see a few hints in this data. But fueled by cash and animal spirits, the upward march goes on, even as an ever growing portion of the population can no longer afford the products or services that public companies provide.

This reminds me of the last days of the tech bubble in 1999-2000. Many of us recognized then that the game was over. But it continued well into 2000 before the tide turned. Egged on by the mainstream media, investors lost their minds in the final stages of that bubble, just as homebuyers did in 2005 and 2006. It took until 2007 for housing prices to collapse.

These mainstream pundits today say that we are in this big jobs recovery where forgotten blue collar workers will magically get jobs and make more money. This is crazy stuff. When you dive into the data, you see that it’s absolutely unsupported. So I believe that we are almost certainly in the last stages of this bubble. The rosy scenario driving stocks to new highs is driven by a false narrative. The next few months look like a good time to be steadily be taking your chips off the table and going home.

Meanwhile, I’ll continue to track the progress toward the endgame of this madness right here, and at the Wall Street Examiner for more technically minded traders and investors.