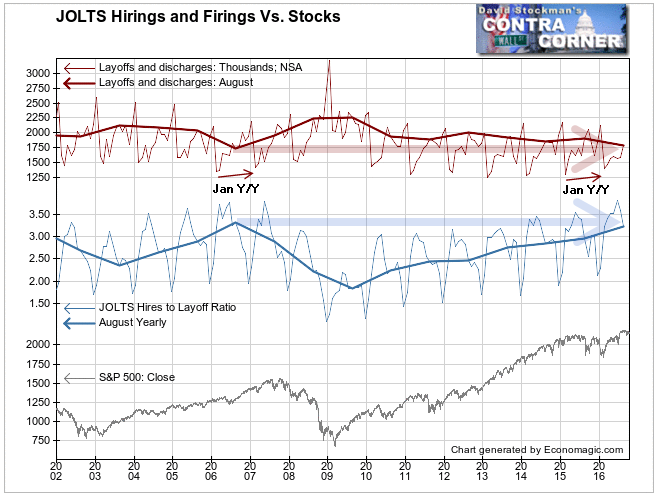 By 2007, when the stock market peaked and began to weaken, the housing bubble had already popped and employers had already recognized that fact. Stock investors were, as usual, the last to get the news. So it looks as though these measures gave early warning of the stock market downturn. However, that’s an anomaly, simply because there was such widespread awareness that the housing market had dramatically weakened and everybody, except Ben Bernanke and his Wall Street fans, was extremely concerned. That’s why hiring slowed and layoffs increased well before the stock market peaked.

At most market turns, the economy normally lags the turn in stocks, or at most might be concurrent with the stock market turn. But because the data release always lags real time by a month or more, usually stocks have already started to weaken before the economic data does. The JOLTs data only goes back to 2001, but we’ve seen stocks lead the economic data in many types of data time and again through many cycles. This behavior led to the myth that stocks discount the future. In actuality both respond to changes in liquidity, but at different rates. Stocks respond first, because when liquidity dries up, securities liquidation follows virtually instantaneously and feeds on itself, often dramatically.

The economy responds concurrently, but much more slowly. The initial turning point is often subtle and may go unrecognized for months. Even if monetary policymakers are aware that that’s happening, they like to put on a happy face in the belief, that happy talk talk talk happy talk will make people behave how policy makers want them to. In reality people, consumers, behave according to how much liquidity they hold.  If their equity in their homes dry up, they can’t get cash. Few people have savings to back their spending, and those who have been prescient enough to save, usually hunker down at the first sign of trouble.

So stocks crash first, and the economy gets pulled along. The most ironic thing is that the recession isn’t usually officially recognized until it’s already over, by which time stocks have bottomed. This is why economists and those who report what the economists are saying are absolutely worthless to investors. But when we look at the data a little more closely, and in ways that Wall Street, and The Journal, and CNBC virtually always ignore, we see things. There are correlations that can be useful and may give us early warning that trouble lies ahead. The above study of firings and hirings is an example.

Today, the growth rate of nonfarm payrolls has been declining for 21 months and is now just above 1.5%. If that drops below that line, consider it a ringing bell, the kind that Wall Street says that nobody rings at the top.  In fact, there are usually lots of ringing bells, but you can’t hear them if your head is, uh… in the sand. Yeah, that’s it–in the sand.

Now lets address a couple of other widely believed Wall Street fallacies.  Many economists point to steady growth in payrolls as a sign of a healthy growing economy. We know that’s not so. For one, as David Stockman has chronicled so well, most of the employment growth has been in low skill low pay jobs. Sure, there are some good jobs being spawned, but the majority are not. If all the jobs were so good, Americans would be enjoying a broad increase in the standard of living, and that’s not happening. 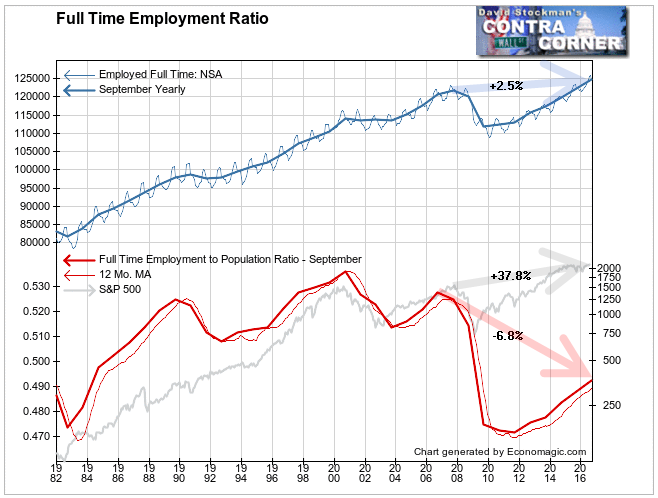 Here’s another troubling fact. Since the last stock market top in 2007 the number of full time jobs has increased by a total of 2.5%. That’s not per year, that’s total. Meanwhile over that time, the Fed’s two headed policy monster of QE and ZIRP have driven the stock market higher by nearly 38%.

That’s just crazy. While stocks have bubbled up by 38%, economic growth was first negative from 2007 to 2009, rebounded strongly in 2010-11, and then has been at best around 2.5% per year, lately closer to 1% (or even zero).  Between the 2007 top and now, US population has increased by around 9% and real GDP is up by just under 12% total. Furthermore, corporate profits, even with all the accounting games businesses play, have been declining for the past couple of year.

Job growth isn’t even anywhere near population or GDP growth rates, let alone the mysterious and magical 38% gain in stocks. Automation is slowly but surely killing the American work force and lately it hasn’t even been boosting corporate profits. So remind me again how monetary policy will cause the “wealth” of central bank driven bubbles in stocks and bonds to trickle down to workers. That was the policy after all, and apparently some central bankers still believe in it.

They’re living in a dream. Since 2007, and after 7 years of trickle down economics starting in 2009, stocks are up 38%. Meanwhile the number of full time workers as a percentage of total population has fallen from 52.3% to 49%. The Fed needs to wake up. This is a structural problem, not one that free money for speculators, bankers, and hedge funds can fix. Maybe rational investment returns for real investment might. Maybe the Fed might try that revolutionary idea. Of course it would require rational interest rates on savings and rational borrowing costs that return an element of risk to decision making.

Reasonable return for reasonable risk drives prudent decision making and prudent investment. It’s absolutely necessary to a healthy economy. That’s not on the Fed’s radar, and it’s certainly not on the radar of any other major central bank. Their idea seems to be, let’s punish rational savers and investors even more with ever deepening negative interest rates.

Finally, here’s another mainstream economic fallacy. The idea that we need more inflation and that low interest rates stimulate inflation is just not true. Every time the Fed has begun a series of cuts in the target Fed Funds rate, that has either led wages down, or wages began to move down concurrently with the policy move. Once Fed Funds got to zero, nominal growth in wages also hit rock bottom at roughly 2%. That’s probably less than a realistic inflation rate. Even using the CPI, which typically understates actual cost of living inflation by about a half point or so, the rate of increase in real wages has been close to zero for a couple of generations.  Furthermore, wages have only risen when the Fed was raising rates, not when it was cutting them or holding them at zero. 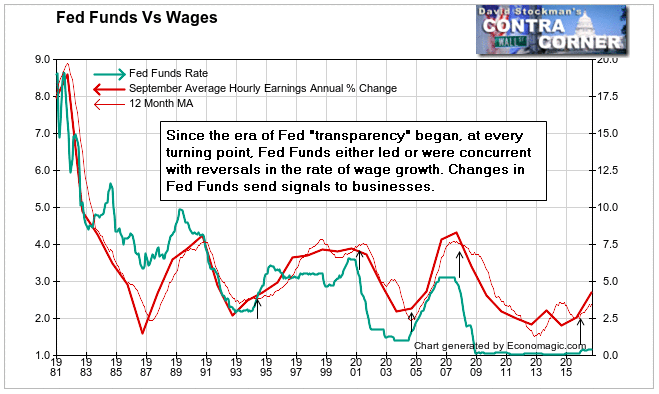 Why is that? Because in the era of Fed transparency the Fed telegraphs policy moves in advance. By signaling that they’re going to cut rates, it sends businesses a signal to start pulling in their horns, including not just in hiring, but in wage increases. Likewise when the Fed sends a signal that it is going to raise the Fed Funds rate, it is telling businesses to bulk up, things are good. Labor also feels more confident, so wages rise. Therein lie the seeds of destruction because these actions become self fulfilling prophecies and the economy rapidly overheats. So the Fed tightens even faster, and soon the liquidity that had made the markets look so wonderful for all these years dries up. Markets top out when that process begins, not when it’s in full swing. By then, it’s too late for investors. The bear will have already extracted its pound of cash.